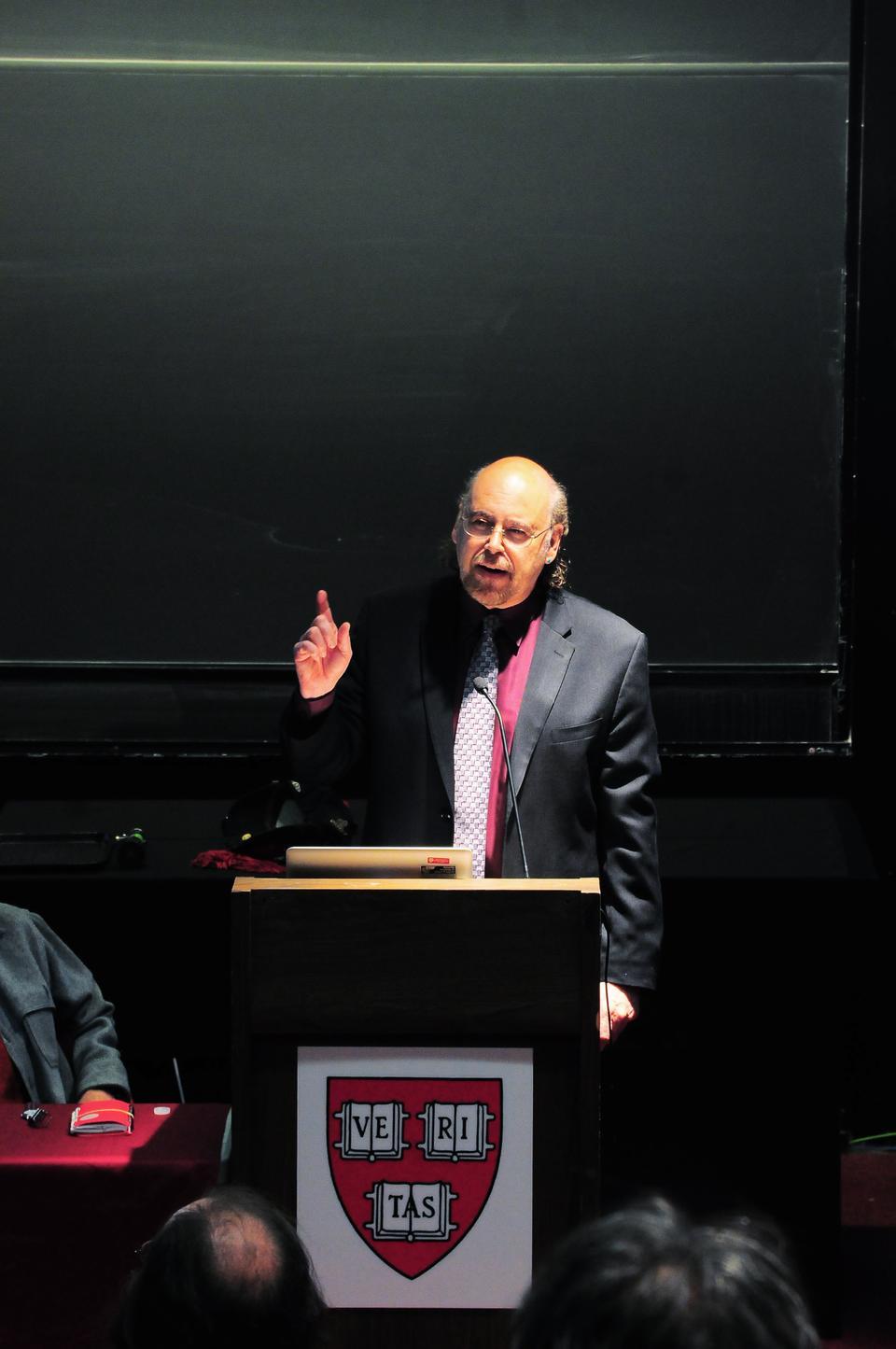 Professor Davíd Carrasco speaks about the richness of the history of Latin America at the Symposium on Urbanism, Spirituality, and Well-being. The interdisciplinary panel of academics shared their views on Thursday evening in Science Center Hall E. By Nzuekoh N. Nchinda
By Sonia Kim, Crimson Staff Writer

Harvard launched a five-year lecture series to commemorate the career of a Mexican archaeologist, an effort to promote work from Harvard’s office in Mexico City.

The lecture series, which began this semester, celebrates the 40-year collaboration between Divinity School professor Davíd Carrasco and Eduardo Matos Moctezuma, Mexico’s premier archaeologist who has led excavations to uncover remains of a temple in the former Aztec capital of Tenochtitlan.

Carrasco served as an interpreter to Matos Moctezuma and deciphered the meanings behind the archaeologist's findings.

Carrasco decided to create the lecture series in the name of Matos Moctezuma, calling him “a culture hero of Mexico” for his contribution to the country’s indigenous history.

“Here you have Harvard for the first time setting up a lecture series to honor a Mexican in Mexico City,” Carrasco said. “This new collaboration was significant for Mexico and significant for Harvard.”

Divinity School professor David Carrasco speaks about the history of Latin America at a 2013 panel event. By Nzuekoh N. Nchinda

The lecture series consists of two lectures each year—one in Mexico during the fall semester and at Harvard during the spring. Every year for the next five years, an academic committee will select a new lecturer for each series.

Along with Carrasco himself, many Harvard scholars traveled to Mexico last month to inaugurate the series’ first lecture, delivered by Matos Moctezuma.

In his introductory remarks at the first lecture in Mexico, Elliott said he appreciates the University’s strong relationship with its Mexican partners.

“It’s clear that in addition to academic partnership and intellectual partnership, there is two friendship and collegiality as well,” he said. “That I think is the spirit that has animated this partnership for decades and is one of the reasons why it has been so successful.”

Carrasco said he hopes the lecture series marks the start of a more substantial relationship with the University’s partner institutions in Mexico.

“The series is to educate people from Harvard about Mexico’s richness and bring more of these stories of Mexican history and religion to our students here at Harvard,” Carrasco said.

Given the what he characterized as a fraught state of international relations between Mexico and the United States, Carrasco said he thinks it is especially important to promote knowledge about Mexico’s culture and history.

“I think that people need to understand that we’re citizens of the Americas and not just America and the stronger relationship we have with Mexico is going to help the United States in educating people about diversity,” Carrasco said.