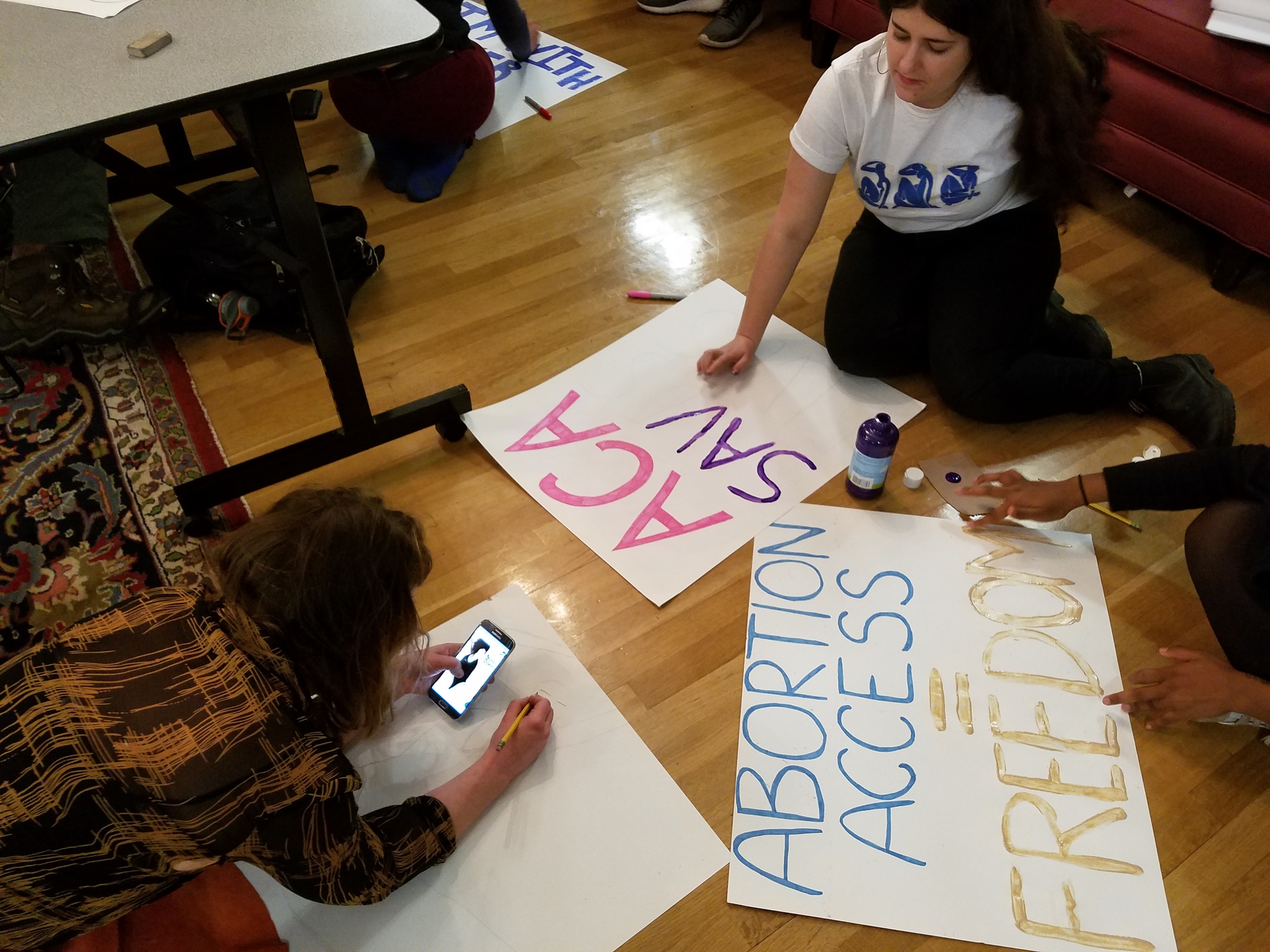 “Let’s move past the mourning phase and be ready to fight and act.”
By Emma K. Talkoff

On Jan. 18, a group of students gathers at the Phillips Brooks House, sharpies and tubs of glitter paint in hand. Donald Trump will be inaugurated in two days, but for many, the work of resisting his administration has already begun.

“I think a lot of activist groups were having conversations after the election like, ‘Yo, what just happened? How are we going to deal with this?’” Sonya A. L. Karabel ’18, an inactive Crimson editor, says, leaning over a poster board. She finishes penciling in the words “ACA SAVES LIVES,” and starts to trace them in pink and purple paint.

From that initial sense of disbelief, Karabel and a few other students organized the Harvard Student Power Network, an umbrella group aimed at facilitating conversation and collaboration between other, more specific activist groups on campus, including the Student Labor Action Movement and Divest Harvard. Tonight’s poster-making session caps off a week of Power Network-organized presentations, workshops, and discussions, collectively branded “Planning the Resistance: A Student Power Activist Training.”

So what exactly does the resistance look like? The week was filled with events covering everything from discussions on voter registration, religion, and climate change to activist-led workshops on peaceful organization strategies and dealing with the press. At Tuesday’s welcome session, attendees expressed a range of goals for the coming week: Many simply hoped to make friends and meet representatives from other groups.

Others pointed out that now, on the eve of the inauguration but weeks after students across campus reacted in shock and sadness to the election itself, some of the initial vitriol had faded. “Let’s move past the mourning phase and be ready to fight and act,” Karabel urged the assembled students, who snapped along in assent.

Back at PBHA, as the week draws to a close, there’s a mingled air of grimness and excitement, plus a kind of summer-camp vibe courtesy of the glitter paint being finger-daubed onto posters. Representatives from various student groups huddle in one corner, conferencing over open laptops; others munch on pretzels and google catchy protest slogans for poster inspiration. Over the next 24 hours or so, these students will pile into buses and vans for the trek down to D.C., where they’ll participate in protests and marches over the weekend of the inauguration.

Eliza R. Ennis ’19, a coordinator for Harvard students planning to participate in the Women’s March, sketches on a large poster board. “Along the side it’s going to say ‘home of the free.’ Or maybe ‘brave.’ Something along those lines,” she laughs. She’s spent “every free moment” of the last couple of weeks coordinating transportation for undergrads, and the enormity of the task is starting to take a toll. She’s still trying to find transportation for three or four more people, she says, but everything’s probably going to work out okay. She’s dreading Friday’s inauguration, but can’t wait for Saturday’s march.

“Every time I look at the news headlines, I’m like, ‘Oh, I’m sad, and this is worse than I expected’—which is kind of hard to believe—but then the next day, I’m like, ‘Ok, well I’m going to come up with new ideas to move things forward,’” she says. Like many in the room, her fear about the years to come is tempered, at least for now, by excitement about the coming days, the coalescing resistance.

“This weekend will be really nice, because everyone who really believes in protecting the people who make America so strong and diverse will be coming together,” she says. “It’s good to know there are other people fighting.”