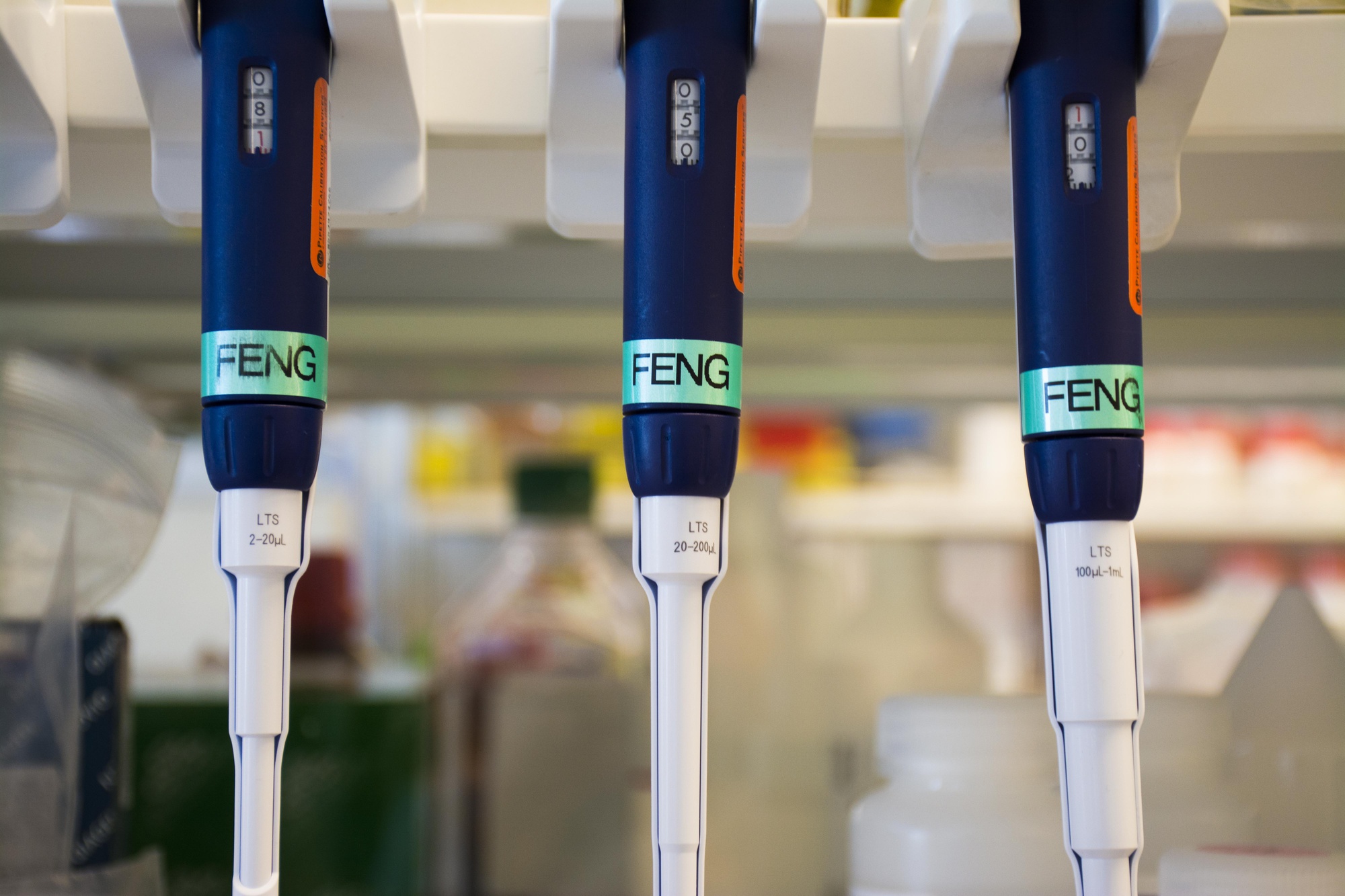 Dr. Zhang's pipettes hang on a shelf above his lab bench. With a nearly two-year-old daughter at home, Zhang now spends less time in the lab. By Charles K. Michael
Advertisement
Advertisement

In science, timing is paramount. Credit for any discovery goes only to the group that publishes first.
By Hannah Natanson

In the early days, Feng Zhang ’04 and his lab ate a lot of late-night Chinese food.

This was before Zhang published the seminal 2013 paper that earned him international acclaim, redefined an entire scientific field, and brought scientists one step closer to curing diseases like cancer. The technology Zhang debuted in that paper, called CRISPR-Cas9, offers a precise and inexpensive way to edit the human genome.

CRISPR-Cas9, sometimes shortened to CRISPR, is as controversial as it is revolutionary. A sort of molecular scissors, scienists predict the gene-editing tool may one day allow scientists to clip disease out of the genome. But it could also usher in an era in which expecting parents select their child’s personality, looks, and intelligence in advance—like ordering items off a menu. 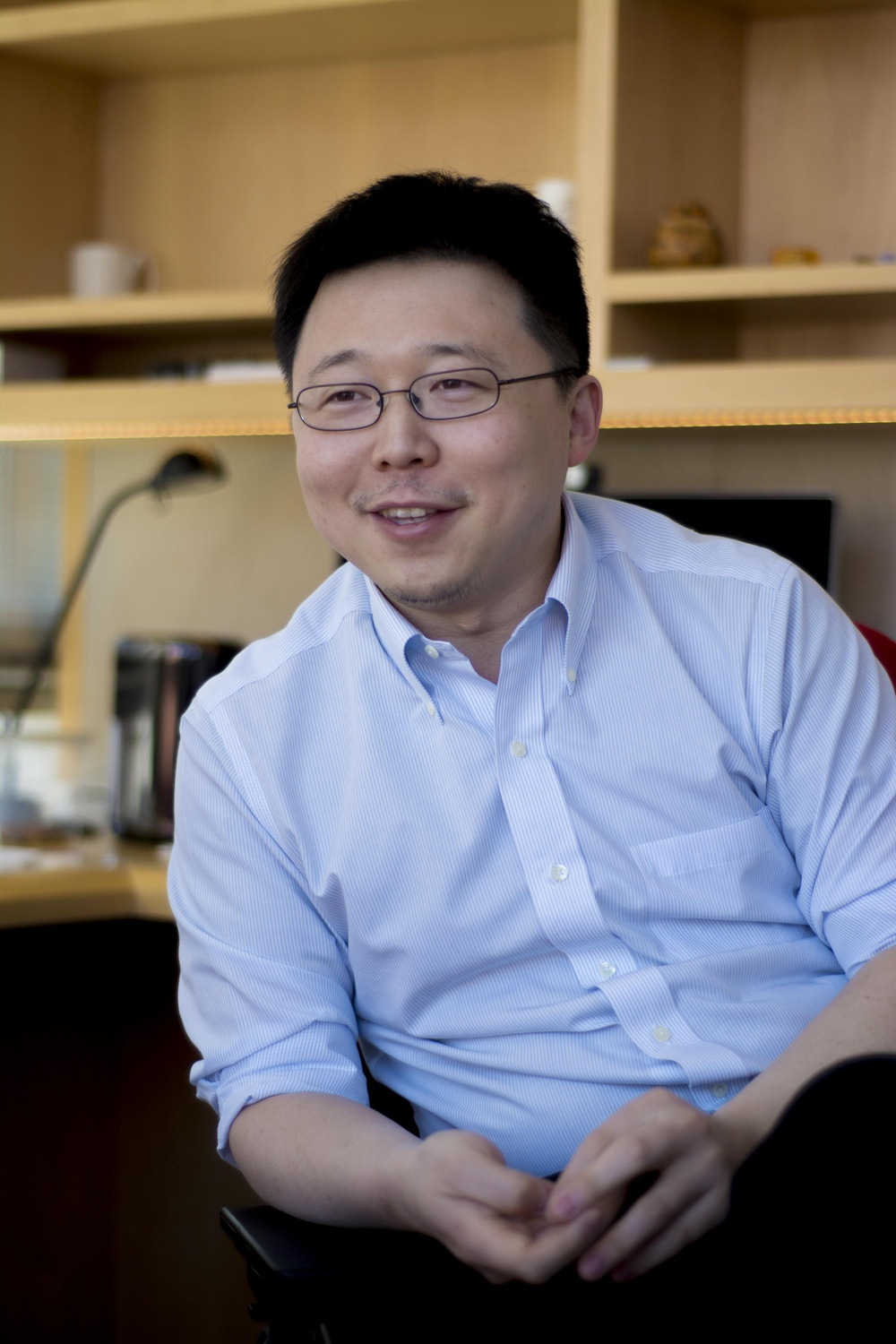 “I tried to build the lab as a start up environment by putting together or recruiting people who are deeply passionate,” Zhang says. “There was just this energy.” By Charles K. Michael

In the run-up to publication, Zhang says, everyone in the lab put in extra hours, staying late and returning early the next morning. Regardless, he insists that no one felt like “we were doing hard work.”

“We were having fun, we were trying to solve interesting problems together, time went by without even noticing,” he says. “We would eat dinner around five and then eat dinner around 10 again… We would pick up Chinese deliveries and just eat together in the kitchen and go back to work right after.”

Leaning forward in his pristine 10th-floor corner office at the Broad Institute, a Harvard-MIT genetics research center in the heart of Cambridge, Zhang steeples his fingers and smiles, remembering.

“I tried to build the lab as a start-up environment by putting together or recruiting people who are deeply passionate,” he says. “There was just this energy.”

That “feeling of energy” continues today, Zhang is quick to add. Advances have come at rapid-fire pace—this month alone, an influential federal science panel released a report endorsing CRISPR-mediated modification of human embryos; a day later, the United States patent office ended a longstanding patent dispute between Zhang’s lab and a lab at the University of California by ruling in Zhang’s favor.

Zhang says he is excited for the future. And his lab still orders more Chinese takeout than any other lab in the Broad Institute, probably.

‘FROM A HORSE-AND-BUGGY TO A CAR’

It was late 2011, and Zhang says was getting frustrated. Earlier in his career, he’d advanced quickly: After graduating from Harvard, where he concentrated in chemistry and physics and helped author a paper showing how flu viruses enter cells, he’d obtained a doctorate in chemical and biological engineering at Stanford. While he was there, Zhang—along with two other scientists—invented optogenetics, a technique that today allows neuroscientists around the globe to better study and understand neural disorders like depression and schizophrenia.

But, when he returned to Cambridge six years ago, Zhang says he felt stymied. He had become fascinated by the idea of gene-editing, but was increasingly disappointed with the editing tools available.

Zhang had been “pretty excited” to show students in his lab how to engineer their own TALE nucleases. Now he wanted something better.

In early 2011, he found it. Zhang was listening to a presentation by Harvard Medical School professor Michael S. Gilmore and “getting bored,” when Gilmore said the word “nuclease.”

“That caught my attention,” Zhang recalls.

Gilmore, who studies bacteria, was describing a bacterial system known as CRISPR that encoded nucleases, which are enzymes that can cleave DNA. Zhang decided he wanted to know more, so he Googled CRISPR and found its Wikipedia page.

“I realized this is really cool,” Zhang says. “If we can harness this system, [gene editing] could be a lot easier.”

CRISPR—short for Clustered Regularly Interspaced Palindromic Repeats—is used by bacteria to fend off invading viruses. Zhang discovered he could repurpose CRISPR to edit plant and animal (including human) DNA: The system could be targeted to different sections of the genome, where a CRISPR-associated protein called Cas9 would step in to snip the selected DNA.

Zhang’s invention was a major step forward. James F. Angstman, a graduate student in the Department of Molecular and Cellular Biology who works with CRISPR as part of his research, describes going from zinc finger and TALE nucleases to CRISPR-Cas9 as going “from a horse-and-buggy to a car.”

“They both get you from point A to point B, but one way is way, way easier to make and to maintain and to implement,” Angstman says.

David Cox, a student at the Medical School who works in Zhang’s lab, puts it this way: Before CRISPR-Cas9, “the limiting thing for a lot of interesting biological questions was just the tools with which to ask those questions.” 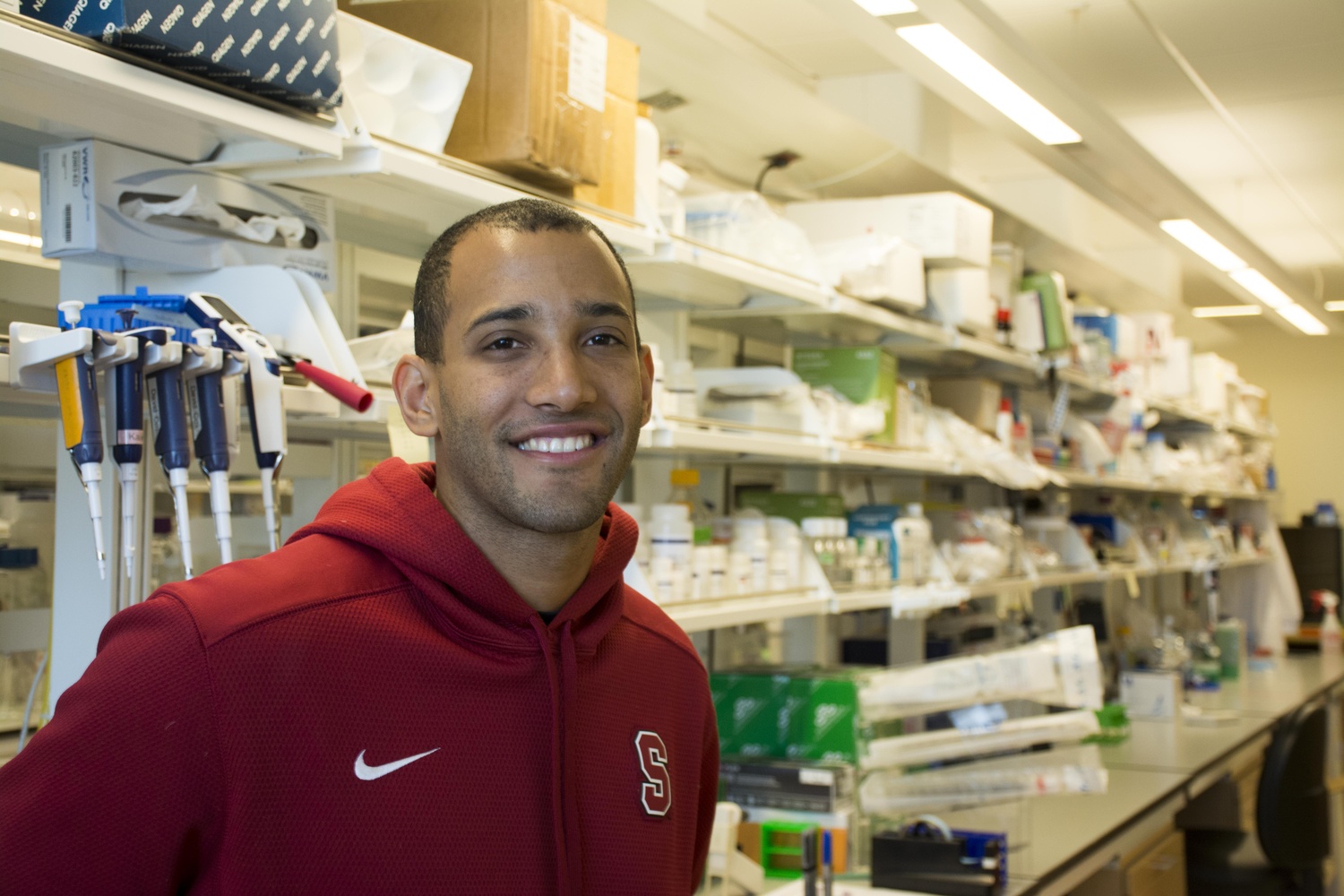 David Cox, a graduate student at Harvard Medical School who works in Zhang’s lab. Cox is one of a handful of graduate students who assist with research in Zhang's lab. By Charles K. Michael

CRISPR-Cas9’s popularity has exploded since Zhang published his paper. From 2013 to early 2017, 4,429 published scientific studies around the world used the technology, according to a STAT News analysis.

In science, timing is paramount. Credit for any discovery goes only to the group that publishes first.

For the past year, Zhang and the Broad Institute have been embroiled in a patent battle to decide who won the CRISPR race: the Zhang lab or a University of California at Berkeley group led by Jennifer A. Doudna, working in collaboration with Emmanuelle M. Charpentier of Sweden’s Umea University.

Back in 2011 and 2012, as Zhang and his group were spending late, CRISPR-filled nights at the lab, Doudna and her colleagues on the opposite coast were doing the same.

The two women beat Zhang to publication. In June 2012, almost half a year before Zhang’s article would appear, Doudna and Charpentier published a paper demonstrating that CRISPR could be used to target and cut various stretches of the genome.

But there were crucial differences. The Doudna-Charpentier paper only proved that CRISPR could slice DNA in a test tube; Zhang’s report showed CRISPR worked inside both human and mouse cells. Moreover, Doudna and Charpentier’s version of CRISPR used different molecules and lacked “critical components” required to make the technology function in living systems, Zhang told STAT. 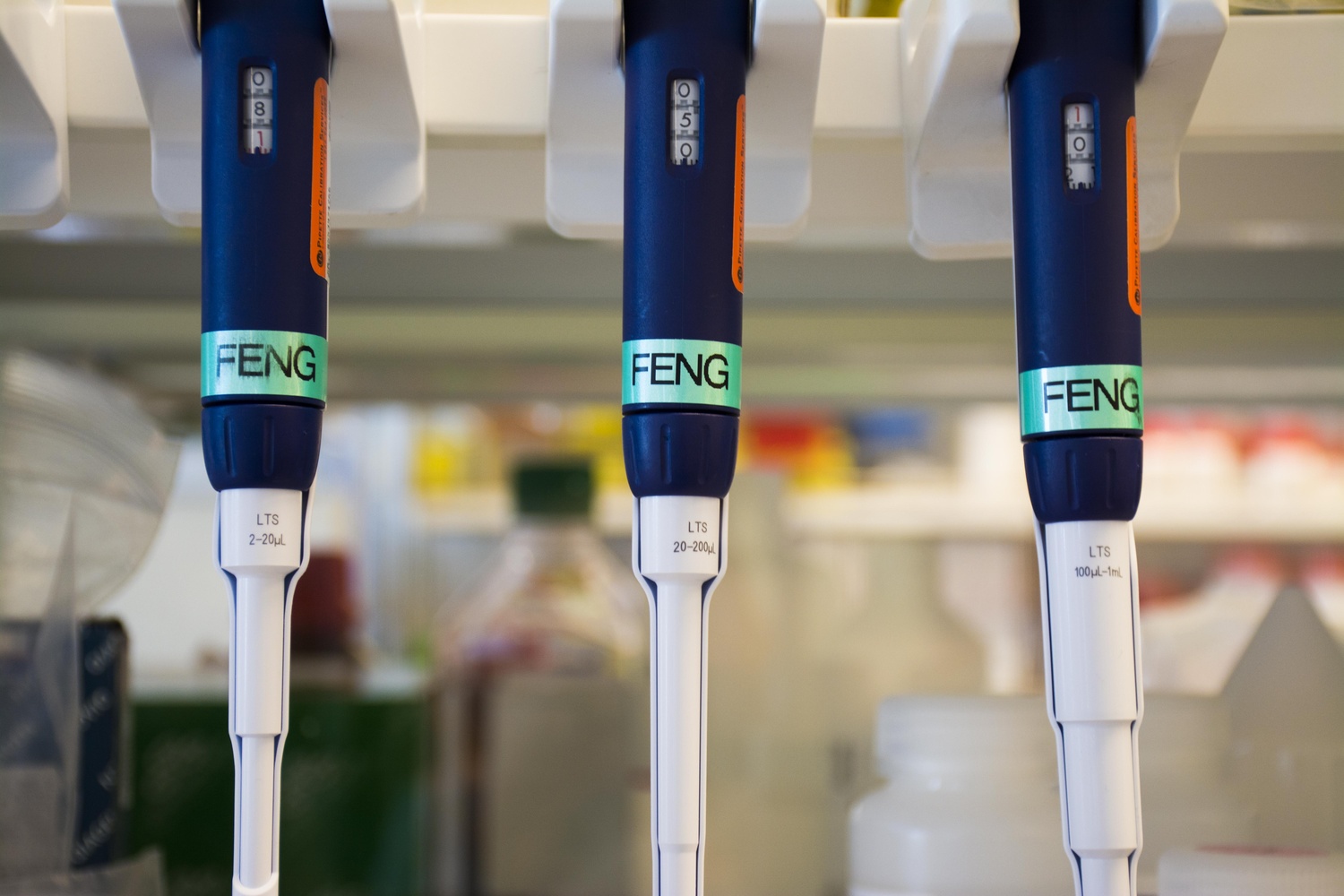 Dr. Zhang's pipettes hang on a shelf above his lab bench. With a nearly two-year-old daughter at home, Zhang now spends less time in the lab. By Charles K. Michael

Zhang and the Doudna-Charpentier team both applied for CRISPR patents in 2013; Doudna and Charpentier filed their application in March, Zhang a few months later in October. In April 2014, the United States patent office awarded MIT a patent for using CRISPR-Cas9 to edit plant and animal DNA and listed Zhang as the primary inventor.

UC Berkeley appealed the decision, arguing that Doudna and Charpentier deserved credit for CRISPR, not Zhang. Doudna and Charpentier contend that Zhang’s paper merely builds on their work—in their view, they drew up the architectural blueprint for the house; Zhang just switched paint colors and fiddled with the molding.

Zhang disagrees. Not only did he come up with the idea of using CRISPR in animal cells before Doudna and Charpentier did, but his version of the technology is designed differently, Zhang told STAT. Now, 13 months after the patent office first agreed to investigate UC Berkeley’s patent complaints, the government has sided with Zhang.

The patent board ruled last month that CRISPR patents belong to the Broad Institute, writing in its decision that Zhang’s use of CRISPR in mouse and human cells “would not have been obvious” from the Doudna-Charpentier paper. In other words, Zhang and the Doudna-Charpentier team planned and built different houses.

Glancing at the Boston skysline spread across his office windows, Zhang—a little over two weeks after the patent office ruling—says he is glad to “have some resolution on that front.” He adds he is especially happy he can focus on science again.

“I think what is really exciting is that I get to spend my time and all my effort working on research and trying to discover new things and new technologies,” Zhang says.

Doudna and members of the UC Berkeley lab did not respond to requests for comment for this article.

Zhang says he thinks the patent fight has ultimately been “a distraction from the science,” and adds he is glad progress on CRISPR has not been “impeded” too much by the conflict. He pauses, and rests his elbows on the arms of his desk chair.

“There are many different contributions from many groups around the world and each one of their contributions adds something,” he says. “I think this is really good overall.”

Zhang’s lab continues to work at a frenzied pace. They have a lot to do—CRISPR-Cas9 has potential applications in fields ranging from therapeutics to farming (it could be used, for example, to genetically engineer crops that require less fertilizer). 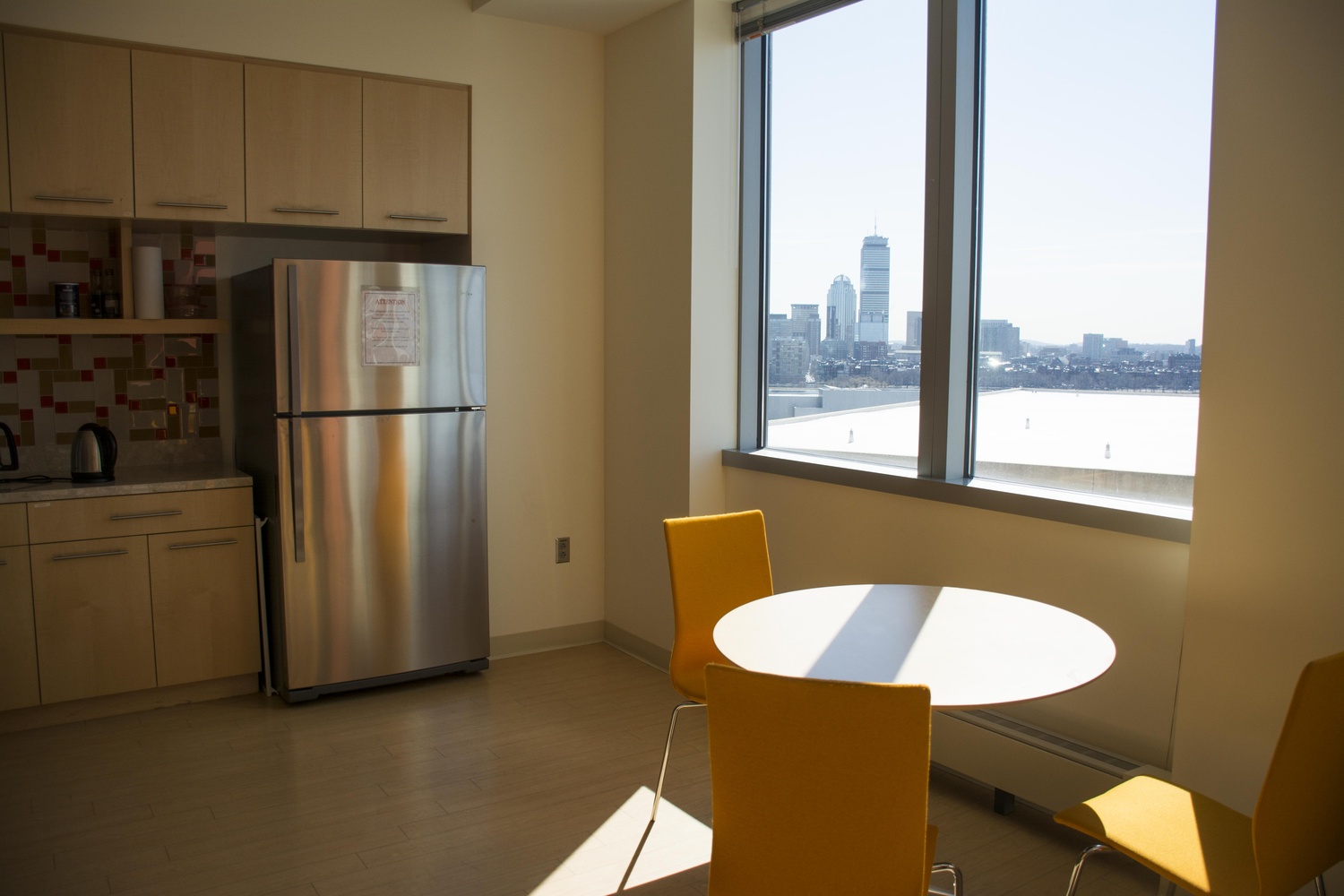 The kitchen where Zhang and his team eat their takeout meals has broad views of the Boston skyline. By Charles K. Michael

Many have balked at the possibility that CRISPR could also be used to genetically engineer babies. After a February 2017 ruling by a United States science panel—convened by the National Academy of Sciences and the National Academy of Medicine—that CRISPR can be used to delete genes known to cause “serious diseases and disability” from human embryo DNA, the era of the “designer baby” seems closer than ever before.

Zhang says only that he thinks “we need to be very thoughtful and very careful” going forward.

But he has other things to think about. A little less than two years ago, he and his wife had a little girl, their first child.

Nowadays, while Zhang’s labmates stay late at work, munching on scallion pancakes and beef with rice, Zhang heads home. He says he wants to “spend more time” with his toddler (though he admits he’ll “soon get back on the computer.”)

He says he has not discussed CRISPR with his daughter.

“I don’t think she has any idea,” Zhang says, laughing at the suggestion.

She does not yet know the world she inherits may be shaped, in part, by her father’s invention.