Wrestling Season Comes to an End — Or Does It? 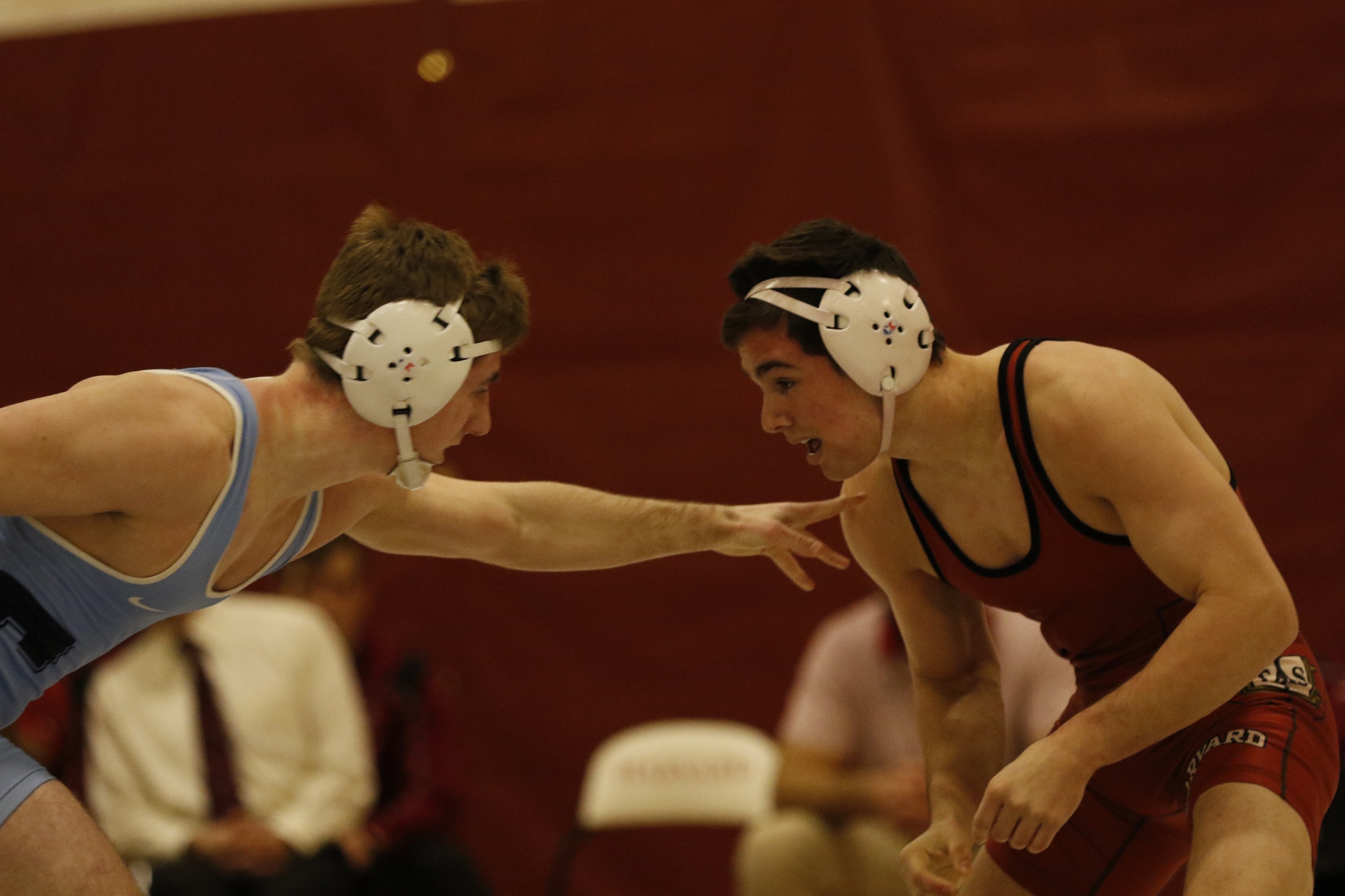 Freshman Hunter Ladnier, pictured in January’s meet against Columbia, owns a 19-14 record on the year. The 149-pounder won his match against the Lions, scoring five points after a 18-3 technical fall victory in the Crimson’s 24-14 triumph over its Manhattan-dwelling Ivy League rival. By Timothy R. O'Meara
By Sam Danello, Crimson Staff Writer

­The Harvard wrestling season ended on Mar. 17, when junior Josef Johnson bowed out of the NCAA Championships.

Wrestling his third match in St. Louis, Mo., the tri-captain dropped a 7-2 decision to Taylor Lujan of Northern Iowa. That result, combined with an earlier loss to the third seed, bounced Johnson from the event.

The 174-lb. wrestler flew back to campus, unpacked his clothes, and reunited with teammates. So began the Crimson’s long offseason.

For many wrestlers, the offseason is long because it is not truly off. Freshman Hunter Ladnier can subdivide the year into four separate stages. First comes the spring, when the team trains through freestyle wrestling. During the summer and the fall, the formal preseason, athletes tune technique. Real competition arrives in the winter.

Depending how you look at it, wrestling either never stops or rarely starts. Months of practice time overshadow minutes of live action.

“We expect a lot out of each other every day,” Ladnier said. “We’re trying to break some boundaries and see how hard we can push each other.”

As taxing as the postseason may be for freshmen, sophomores, and juniors, it is even more tedious for seniors. Suddenly the offseason never ends. There’s no more recuperation—only retirement.

Senior Jeff Ott joined Johnson and Ladnier in St. Louis. Together the trio represented Harvard at the NCAA Championships, or what Ott dubbed “the biggest tournament in the world.”

Number geeks may quibble, but the captain Ott has a point. Last year, the event took place in Madison Square Garden—the birthplace of “Linsanity,” home of Spike Lee, and memorial to countless other legends.

This year’s wrestlers competed under the less vaunted rafters of the Scottrade Center, but glitz abounded. Literal fire and smoke accented weight-class finals. Close to 20,000 people watched live. ESPN carried all the matches.

Wrestling is not a sport of celebrities. But come to the NCAA Championships, and you may leave confused.

Ott and Ladnier left after the first day. Neither won a match, but both claimed vivid memories.

“We [were] excited to represent Harvard,” Ladnier said. “Obviously I wasn’t so satisfied…. There’s a lot of work to do to get me where I want to be, which is on the podium—an All-American.”

With three years left, Ladnier headlines a talented core of youngsters, many of whom will stay over the summer to train. Fellow rookie A.J. Jaffe made the All-Ivy second team at 141 lbs., and freshman Kyle Bierdumpfel posted a 12-11 record on the year, one of five wrestlers to top .500 with at least 10 contests under his belt.

The Crimson wrestles tough opponents, too. In December of 2016, the team traveled to Las Vegas and Evanston, Ill. to face top-10 competition at the Cliff Keen Invite and Midlands, respectively. These kinds of tests promise to toughen any rookies.

“We’re definitely excited,” Ladnier said. “Guys are buying into the culture and the system.”

However brightly the future shines, the last word in 2017 belongs to Ott and the group of five other seniors that shepherded Harvard through the season.

In February, the team held a banquet at which seniors gave speeches that reflected on their careers. That closed-doors meeting came before the conference tournament and set the tone for the rest of the year.

“They’re mature guys,” Ladnier said. “I don’t think their identity is necessarily tied to the sport. They’re a lot more than just wrestlers.”

Still, Ott was a wrestler until Mar. 16—the day that he exited the NCAA Championships.

He reached that point after overcoming a knee injury earlier in the spring. Ranked as a seven seed entering the conference tournament, he pulled an upset in the semifinal to ensure a berth in the NCAA Championships.

That late-season magic ran out in St. Louis, finally forcing Ott to face the reality of abrupt endings.

“After the match was over, I stayed on the mat for a second or so—just looked around at the spectacle,” Ott said. “Obviously you can’t do a ton of reflection in the moment. But I was extremely grateful for, one, being in that situation and, two, for everything that had happened to get me to that point.”