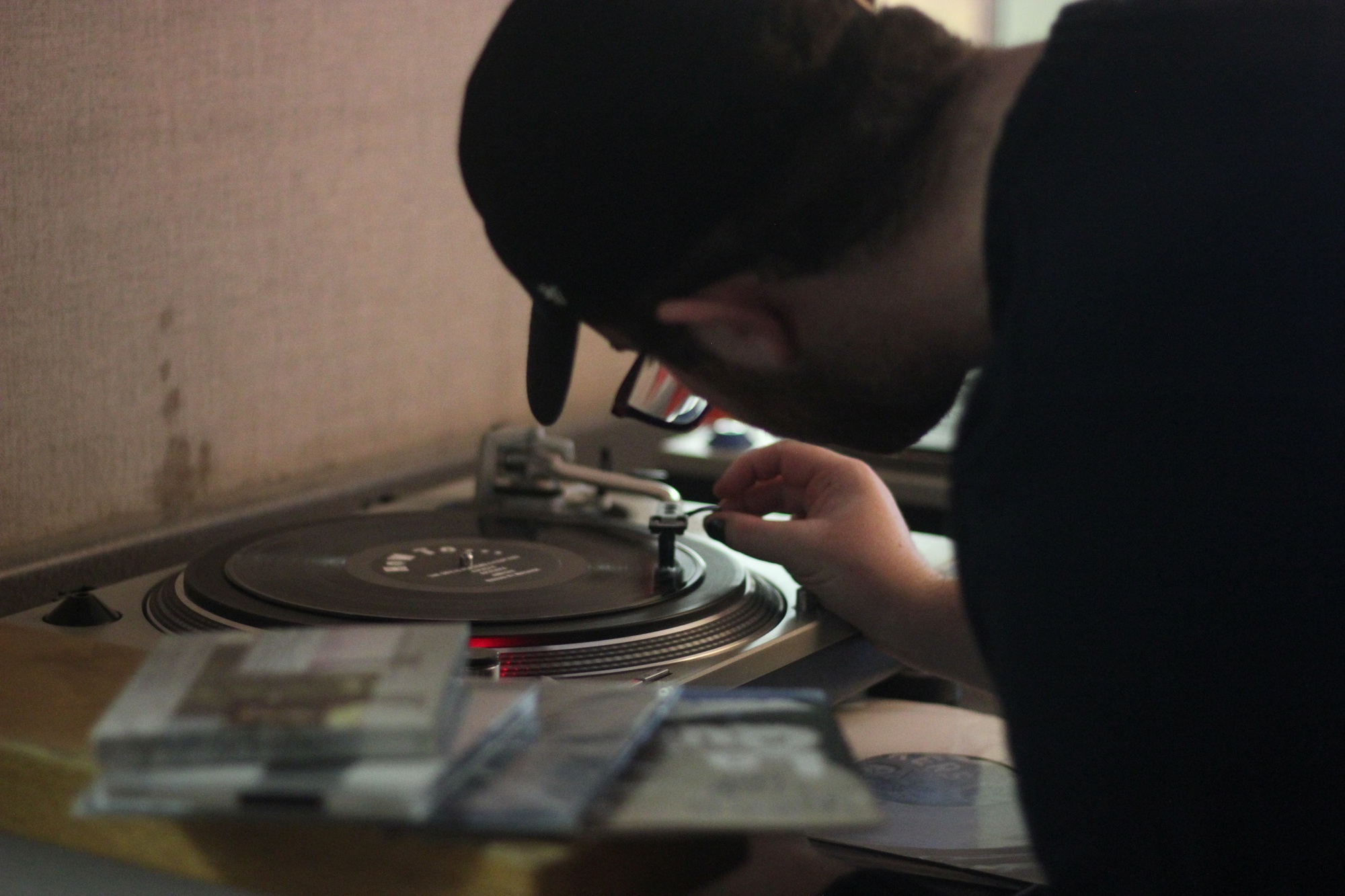 Luongo and de los Reyes are nearing the end of their four-year reign over WHRB’s punk rock department, and it’s clear they’ve had a good run.
By Emma C. Scornavacchi

A record is spinning, the soundboard is lighting up, and punk rock music is piping into the dimly-lit studio. Papers and lists coat a corkboard. A Himalayan salt lamp lends the room its low, warm lighting. Two microphones hover at the ready.

From 10 p.m. to midnight every Wednesday, de los Reyes and Luongo play punk rock music on 95.3 FM from the Pennypacker basement studio of WHRB Cambridge, Harvard’s student-run radio station. Their show is a part of Record Hospital, the station’s punk department.

“One second.” De los Reyes silences the small studio, already filled with a few visitors, as she and Luongo place headphones over their ears. “We have to announce right now. Standby.”

As the current song plays its final notes, the two glance at each other. This is a routine they know well.

Luongo and de los Reyes are nearing the end of their four-year reign over WHRB’s punk rock department, and it’s clear they’ve had a good run.

The pair weren’t always slotted for 10 p.m. on Wednesdays. They’ve held this coveted spot for three semesters, but the two started off, as almost every WHRB comper does, in a much less palatable time slot: the 3:30 a.m. to 5 a.m. shift.

“You feel this human connection talking into the microphone,” Luongo says. “Like, ‘Is anyone listening?’ And you don’t know. They could not be. You just have no idea.”

Regardless of the number of listeners, both Luongo and de los Reyes consider these late hours worthwhile. As seniors now, they light up with quiet pride recounting how they’ve worked their way up WHRB’s ranks.

“At two in the morning the only other people awake are cab drivers and late-night graveyard shift people,” de los Reyes says. That’s not to say, though, that the 10 p.m. shift is bereft of wacky listeners.

The studio’s phone rings three times over the course of the two-hour show. The first time, someone’s speaking nonsense. The second time, Luongo answers and listens for a long moment before holding the phone to his chest and glancing around the room.

“Someone screaming,” Luongo says. The room lets out a collective giggle and passes the phone around. Sure enough, a sustained scream issues from the receiver.

“I’m glad you like the music… Have a good night, man.” Luongo hangs up the phone, shaking his head and laughing.

The third call of the night is someone calling in sick, a friend of the show calling with regrets that he won’t be able to make it tonight. “Oh, that’s my roommate,” de los Reyes says. “He’s always here.”

Members and friends alike spend time in the studio working shifts, doing homework in the many lounges, talking to friends, and rifling through records.

“We use it as a space for a lot of things,” Luongo says. Sure enough, over the course of the show, at least five people duck in and out, either poking heads in to say hello or sinking into the studio’s plush couch to chat.

According to the hosts, the show has become a Wednesday night staple for a whole community of listeners, and has evolved and developed a strong character since de los Reyes and Luongo began as freshmen.

“Punk has a long history of activism and protest,” de los Reyes says. “We try to find people who wouldn’t get air time.” Any band played too often on the radio, even within the narrow window of college punk rock, is out of the question for Baby’s First Mosh Pit.

“It ends up letting us amplify a lot of voices that don’t get amplified,” de los Reyes says. “A lot of members of the station identify as queer, so we have all these really cool queer bands represented because people are bringing in their own tastes and issues that they want to fight for. I try to play as much female-fronted bands as I can, and people of color…. A lot of the time that gets left out of the alternative music scene.”

De los Reyes and Luongo are also more than ready to leave their mark on the music they are so passionate about. As most station members before them do, they each have a unique signature and nickname used for scribbling opinions on records. Often those scrawled opinions comprise conversations that span decades and generations.

De los Reyes (klutz) and Luongo (tugbt) have kept this tradition alive. “People are ruthless!” de los Reyes says, flipping through the records and scanning the comments. WHRB studio members of the past include professors, famous writers, and music industry moguls—all of whom current members can communicate with through pen scribbles stuck to records stacked away in the Record Hospital lounge.

“When you meet old alums, you can be like: ‘What’s your symbol?’” Luongo says. “And you might not know their name, but you’ll recognize a record they wrote on 15 years ago.”

If there’s anything this show proves, it’s the staying power of music. De los Reyes and Luongo will graduate in May, but klutz and tugbt will keep having conversations for as long as Record Hospital is on the air.

As the pair wrap up this Wednesday’s show, they glance at each other with a knowing smile.

“Keep on listening.” And the music starts up again.