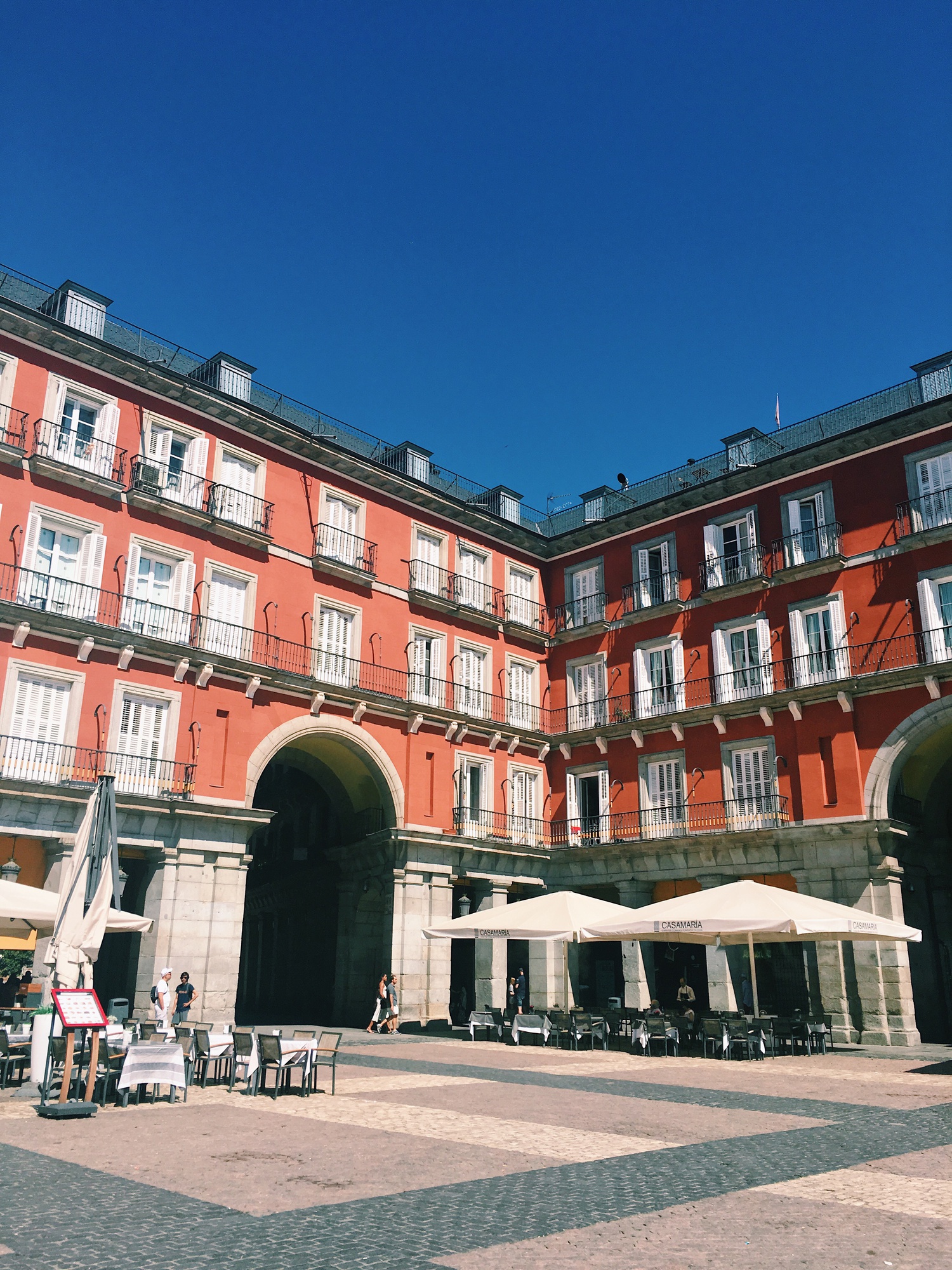 Endpaper: A Cocktail Bar in Madrid

It’s human nature to obsess over other people, but this type of enduring enchantment with such a small moment means something else.
By Emma C. Scornavacchi

The first thing I noticed were her shoes: black loafers with tassels on top, the heel low in an informal way. The second thing I noticed was the way she smiled into her phone, lazily snacking on the bar nuts in front of her.

I met Lea at a cocktail bar in Madrid during my last week traveling and writing through Portugal and Spain. I had been alone for almost two months, and had developed a concerning but useful habit of eavesdropping on other people’s conversations. I’d overheard stories about marital strife, tween gossip, and workplace drama, and come to terms with my own inability to interpret a word of native Spanish. Nosiness became routine.

Lea had been on the phone with a friend, telling her about the sort-of-boyfriend coming into Madrid to see her the next day, and asking whether making a dinner reservation was too serious. The conversation with the friend seemed inconclusive, but when Lea hung up she immediately dialed a restaurant and requested a table for two. When the first restaurant didn’t have a terrace option available, she called a different spot. Lea knew what she wanted.

She moved the phone from her mouth and gestured to the bartender for a second drink. I watched out of the corner of my eye, passively taking in her actions as the bar buzzed around her. Lea, who at this point was still Girl At The Bar, had set off a slew of questions in my head, rapid-fire.

“Do you want some of these?”

Her voice cut through that unraveling spool of thoughts, suspending them frozen. As I’d begun to imagine this girl’s life, content to muse in silence, it had not occurred to me that we’d speak. But as she slid the bar nuts across the smooth wooden surface towards me, I was snapped out of my daydreams. I felt almost guilty. Like I’d been caught.

The ensuing conversation was comfortable, though. Real-life Lea was better than the persona I’d conjured in my head. She was born in Salzburg, raised in Vienna, and now lived in Madrid. She agreed with me that Madrid was underappreciated as a European city, and laughed lightly when I described how Americans only ever wanted to visit Barcelona. She traveled across Europe regularly for work. Lea’s favorite café in Madrid was Celicioso—the one on Calle Barquillo, not the other one. Lea’s favorite city to visit was Zurich. Everything Lea described seemed to glow around the edges. Lea was relaxed but enthusiastic, unintimidating but effortlessly cool, sarcastic but kind.

We talked for an hour and then went our separate ways, Lea to her apartment and I to my hostel.

Lea falls short of “exciting” when people ask me who I met in Europe. I mention the 60-year-old woman who had crossed the Atlantic to Portugal in a sailboat, or the recent college graduate hiking Europe’s major mountain ranges before beginning work in finance. Nothing about Lea feels particularly worth sharing, yet I think about our brief conversation almost daily.

I wonder how much of that is about Lea. After that night, Lea went back to her own life. The sort-of-boyfriend was arriving in Madrid the next day; the terrace reservation had been made; the table at her favorite café would be waiting. For me, Lea lingered. But she lingered as an idea–and has stayed an idea–for weeks and weeks since I sat at that bar.

It’s human nature to obsess over other people, but this type of enduring enchantment with such a small moment means something else. I saw a bit of myself in Lea—or, at least, a bit of who I want to be. Maybe it wasn’t Lea herself, or what she said in our conversation, but rather what I realized about myself since then that’s made an impact.

“Oh, Zurich in the fall is fantastic!”

“I was just thinking I needed to get to Greece again– you’ll love the history there.”

“Next time you’re in London, I have a spot for you.”

I want more of what Lea had—the ease with which she shared the world. I soaked up her poise, subtle enthusiasm, and understated confidence greedily.

I might be imagining it, but I feel that I even held myself differently walking out of the bar than when I’d walked in. In my through-the-keyhole peek into Lea’s life, I saw the upbeat and self-assured way I want to interact with the world around me.

My intense (borderline obsessive) experience at the bar was less about Lea than I initially thought. I was open to her, but in reality everything that happened was in my head. Let interesting people drift into your life and let them offer you their bar nuts, but don’t give them all the credit. Often what we see and value in other people is a reflection of what we realize about ourselves—who we want to be, which is much more important than any one conversation at a cocktail bar.