Wrestling Closes Out 2017 with Midlands Tournament 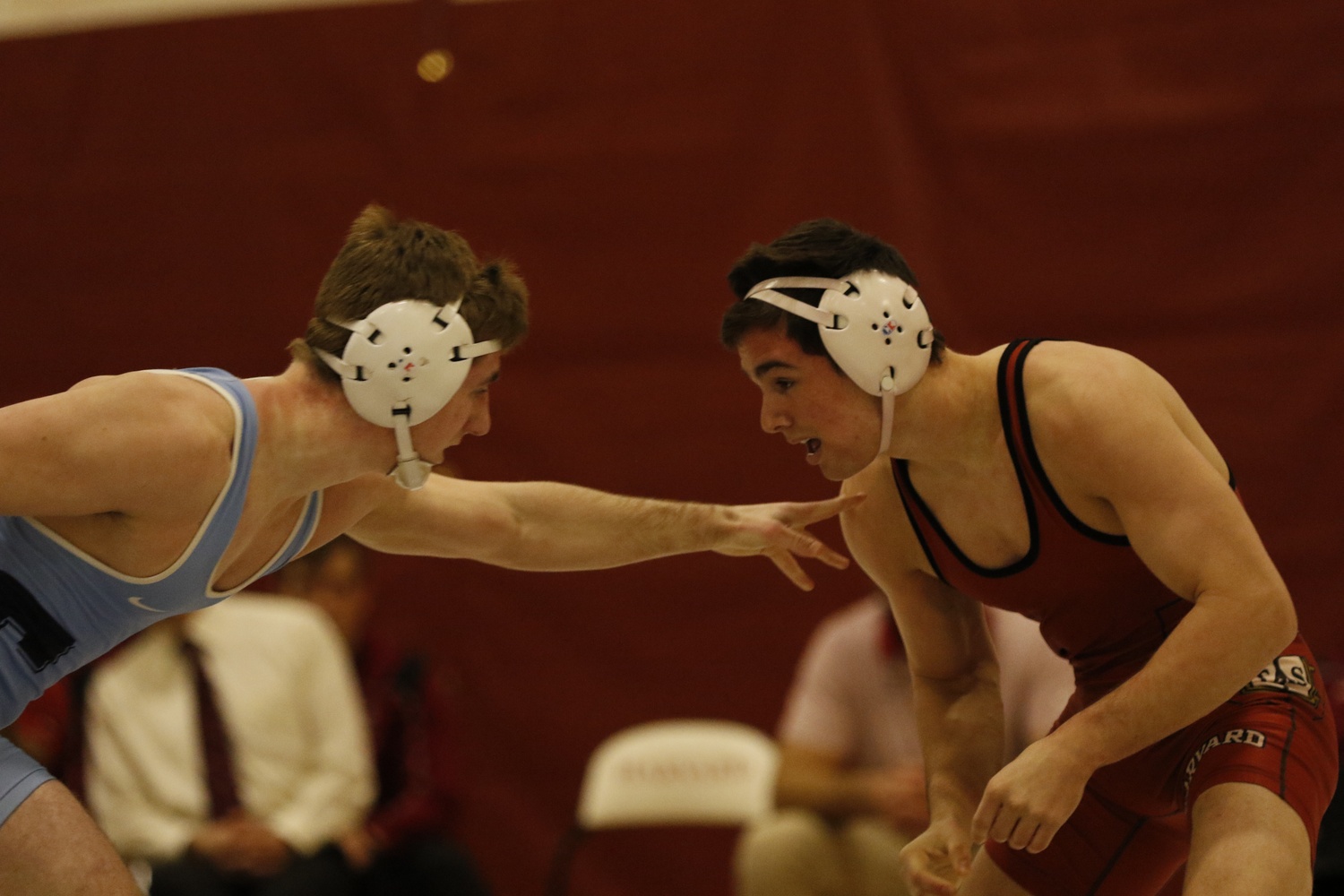 Winter break represents a needed interruption for the majority of Harvard’s students to escape from the responsibilities of the classroom. For the student-athletes, the time off school is exclusively that—athletics continue.

The wrestling squad was one such team with obligations over the break. Four days after Christmas, a group of fourteen traveled to Evanston, Ill., to compete in the Midlands tournament. Of that group, six posted points for the team which finished the two-day tournament in 30th place.

“The Midlands is definitely one of the toughest tournaments in the country outside of the National tournament,” junior Nolan Hellickson said. “It’s a great opportunity for our team to get challenging matches and see where we stack up with some of the best in the nation, especially the out of conference teams that we won’t see again until Nationals.”

Co-captains Josef Johnson and Kanon Dean spearheaded the group, both advancing to the second day of competition and racking up the best overall performances. Dean finished the weekend with a 3-2 record in the 184-weight class, one better than Johnson’s 2-2 mark in the 174-weight class.

On the first day of competition, only four other Crimson wrestlers picked up wins in the tournament.

“I’d say we started out the tournament a little flat,” senior Rico Stormer said. “We just didn’t really show up in our first-round matches and quite a few just lost. Then we started to pick it up after that, guys realized what was going on and stepped up. We had a really good performance from both of our team captains and they led us and kept battling through the second day.”

In the 30-person bracket of his weight class, Dean claimed three straight victories in the consolation bracket—each by decisions. Dean rounded out his third and final victory against EIWA opponent Kevin Parker of Princeton with a strong 5-2 decision.

The co-captain's initial loss came in his first match of the weekend as he squared up against the number four ranked Jordan Ellingwood of Central Michigan. The senior fell in a 16-4 major decision to Ellingwood who, at the end of the second day, claimed bronze.

Johnson faced a trek through the winner’s bracket portion of the 174-pound weight class. The defending National Championships qualifier, ranked number eight in his group, claimed an easy bye victory before downing Eastern Michigan’s Andrew McNally. Another decision, this time 7-2, propelled Johnson past the round of 16 and into the quarterfinals.

In this fourth round, Johnson faced the number one seeded Zahid Valencia of Arizona State. Valencia reached the quarterfinals with falls in every one of his prior match ups—Johnson ruined the streak. The co-captain lost the bout to the eventual tournament champion in a 20-7 major decision. Johnson then lost in the following matchup against Indiana’s Devin Skatzka in the consolation bracket.

The only other Harvard wrestler to advance to the round of 16 was Hellickson. On the shoulders of a first round bye, the Des Moines, Iowa, native knocked out Lehigh’s Matt Parker in 5-1 decision to advance to the third round.

“I had a decent performance, but I hold myself to a high standard and that wasn’t met this weekend,” Hellickson said. “Getting a win to start the day was big and I feel I wrestled well through that match, but I need to carry that forward and build momentum through the tournament.”

In the round of 16, the junior squared up against the bracket’s number three ranked Ronnie Bresser of Oregon State. Bresser defeated Hellickson and finished the tournament with a silver medal.

“Losing my last match on a last second takedown was pretty disappointing and took away an opportunity to string together some quality wins,” Hellickson said. “But I can learn and build from it and carry that forward to the next couple months of competition.”

Exempting byes, the only other wins came from Stormer, sophomore A.J. Jaffe, and freshman Brock Wilson.

“It’s probably the second toughest tournament behind the Cliff Keen Tournament,” Stormer said. “There are a lot of regional opponents there, and a lot of really good schools. It’s not the performance we expect of ourselves and we’re always looking to get better. We’ve just got to figure out how we come out ready to go in the future.”

The Crimson still has time to get where it wants to be. With three more events before the commencement of division play against Bucknell on Jan. 19, the team has nothing to do but focus on wrestling. Harvard will compete in the F&M Open at Franklin & Marshall on Jan. 6.

“Being able to practice wrestling without having the pressures of school on top of you, it’s actually a pretty wonderful time,” Stormer said. “You’re really able to focus and make huge gains in the sport.”

With nothing else to do on a campus devoid of students, the team spends almost all of their time as a unit.

“It really brings us together as a team,” Stormer said. “Oftentimes we’ll play board games, just spend some quality with each other, really get a focus on wrestling and making good lifelong connections with each other. I think it’s really beneficial and it’s one of the highlights of my year.”

—Staff writer Cade Palmer can be reached at cade.palmer@thecrimson.com.