Men's Water Polo Comes Away with Two of Three from Invite 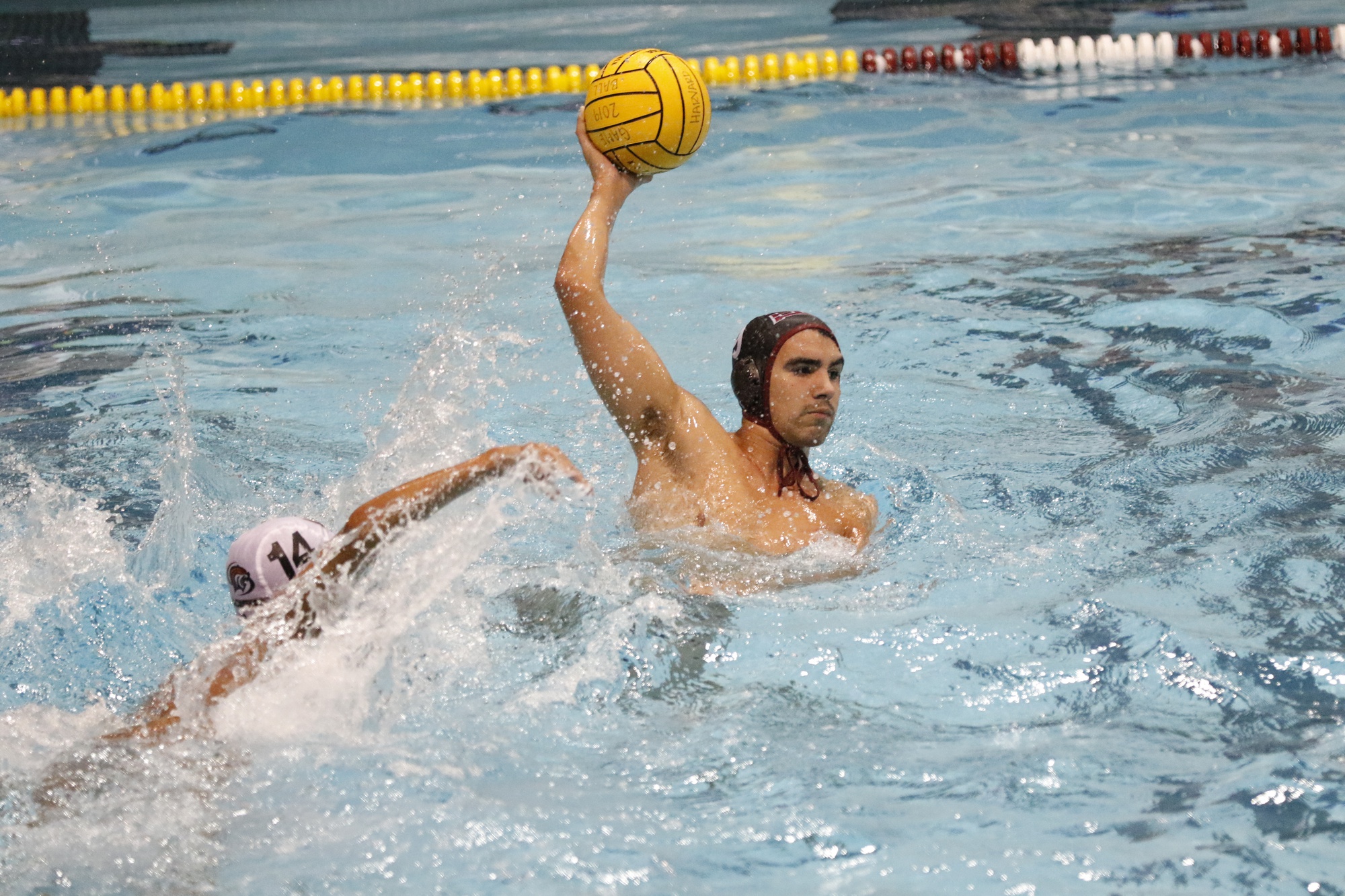 Harvard went 3-0 in its own invite this weekend, downing No. 18 Wagner, No. 15 Bucknell and Claremont-Mudd-Scripps. By Timothy R. O'Meara
By Lev Cohen, Contributing Writer

For the second straight day, the Harvard men’s water polo team found itself locked in a tight battle against another ranked team late in the fourth quarter. This time, the No. 10 ranked Crimson emerged victorious, edging out No. 20 Wagner by the final score of 13-12 Sunday at Blodgett Pool to cap this weekend’s Harvard Invite.

Harvard (15-5, 5-1 NEWPC) trailed the Seahawks (10-8, 3-1 MAAC) for most of the afternoon, going into halftime down 8-6 and then remaining behind for most of the third quarter. But the Crimson knotted the score at 10 apiece with 1:08 to go in the third, and the two teams then traded two goals apiece to start the fourth.

With a shade under three minutes to go in the game, Harvard thought it had gone ahead on a well-worked team goal. The refs judged differently and disallowed the goal after a long review, ruling that the Crimson had committed a foul in the lead-up to the goal.

“After the goal was overturned,” freshman attacker Alex Tsotadze said, “we just came back and said we’re just going to get a stop and do whatever we can to make up for that goal that was taken away.”

Two minutes later, the crowd erupted as Harvard scored again on a solo shot by senior attacker Nick Bunn. This time, the goal was counted, and the Crimson took the lead with 35 seconds to go. Wagner furiously tried to send the contest to overtime, and the Seahawks’ coaching staff argued for a missed penalty call with 10 seconds left. But Harvard withstood the barrage and held on to win.

“In the end, we came out strong and we came out swinging,” freshman goalie Noah Hodge said. “We fought hard against a lot of adversity that we competed against in that game.”

The win over Wagner came a day after the Crimson had fallen to No. 15 Bucknell (16-3, 8-1 MAWPC). In that game as well, the teams traded blows throughout in a matchup that ended with a final score of 17-16. While both defenses left something to be desired on Saturday, the offenses put on a showcase, ensuring that the game remained both competitive and exciting throughout.

The Bison maintained a narrow lead for most of the game, but Harvard managed to tie it with three minutes left on a breakaway goal by junior attacker Charlie Owens. It wasn’t enough to take the game to overtime, though, as Bucknell responded quickly, scoring what proved to be the game-winning goal before the end of regulation.

The game-tying goal was one of six Owens scored in the loss, making it the second time this season that he’s put as many as six past the opposing goalie.

“Yesterday was a wakeup call for us. We came in unprepared and unfocused mentally,” Hodge said, “We were much more focused going into the Wagner game.”

The loss to Bucknell came after Harvard played a strong all-around game against Claremont-Mudd-Scripps (11-5, 6-0 SCIAC) to kick off the tournament. The Crimson jumped out to a quick 2-0 lead after goals by junior captain Austin Sechrest and Owens. Harvard entered the half up 7-3 after a strong defensive performance and kept the Stags at arm’s length throughout the second half, winning by a score of 12-8.

The Wagner match came after an exhibition game earlier Sunday morning in which the Crimson defeated the visiting University of Toronto, 19-11. The scrimmage was a chance for the Crimson to showcase its depth and experiment with some new lineups, as some backup players got extra playing time and made the most of it. The Varsity Blues had lost by more modest margins of six goals apiece to Harvard’s conference rivals Princeton and Brown earlier in the weekend.

After finishing the weekend 2-1, the Crimson will look to continue its winning ways next weekend in Santa Clara, Calif., where it will compete in the Julian Fraser Memorial Tournament. It will be Harvard’s second trip to the West Coast, after the Crimson went 3-1 in Davis, Calif., a month ago and notched its first ever win against a top-three opponent by beating No. 3 California 15-14 in an overtime affair.

“Just a lot more team defense, making sure other teams don’t score more than 10 goals on us,” Tsotadze said. “That’s one of our big goals this month.”