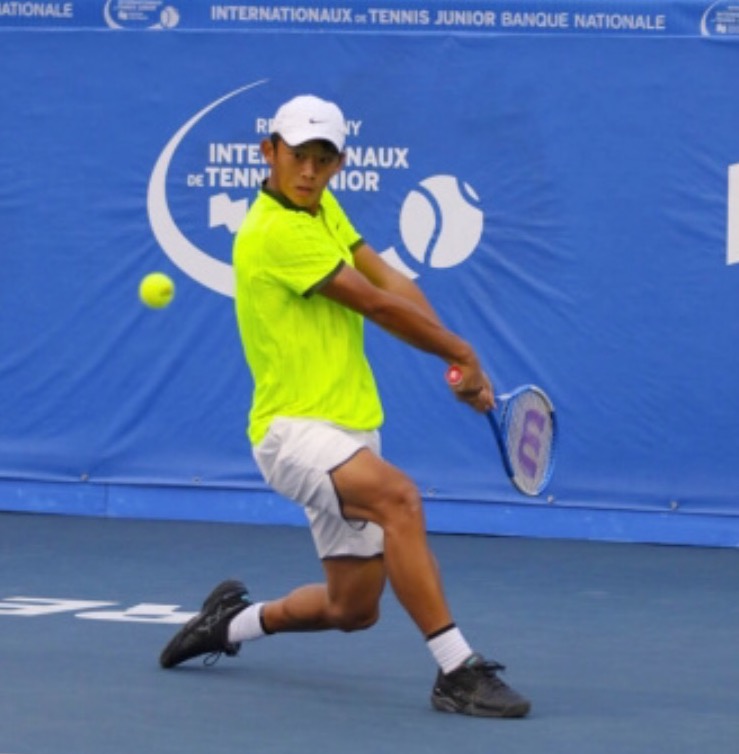 Shi began playing tennis at age five and credits his first coach, Mihai Grecu, with his dedication to the game. By Courtesy of Brian Shi
By Lev Cohen, Contributing Writer

Brian Shi is a gifted tennis player. The freshman was a blue-chip recruit, sixth-best in the nation according to the Tennis Recruiting Network. That makes him one of the top tennis recruits in recent Harvard history. But Shi’s path to the Crimson was neither conventional nor smooth.

The Jericho, N.Y., native has been playing tennis since he was five. When asked why he became such a serious tennis player, he pointed immediately to his first coach, Mihai Grecu, whom he worked with until he was 16.

“I guess he saw some sort of talent in me — I mean I was a five-year-old so I have no idea what kind of talent a five-year-old could have — but from there he got me super into it,” Shi said. “I started playing tournaments when I was eight or nine and he was a big part of my life.”

Shi did not go to a physical high school. Instead, in order to ensure that he had the time and freedom to travel around the world for tennis, he spent all four years of his secondary education in online school. His classes had a start date and an end date with suggested deadlines in between, but it was up to him to decide when and where to study. When he was not playing in tournaments or practicing, he was usually at home or working from a hotel.

“In that aspect it was kind of like I had to be responsible finishing my work, because I did not have someone looking over me all the time,” Shi said. “So basically I taught myself everything online and then got feedback from teachers.”

Shi had pushed to move to an online school because he knew how much time it would give him to improve his tennis, but it was not an easy decision for his family. Shi said his parents, who immigrated to New York from China in their twenties, are tough and academically focused and would have preferred him to stay in a more traditional school setting.

“When I started doing really well at the end of eighth grade, I started traveling a lot and my grades started dipping because I was missing so much school,” Shi said. “My teachers were not really that accommodating, so I guess my parents were kind of forced to put me into online school.”

Soon after attaining his desired move to online school, Shi came close to quitting the sport he loved. When he was 14, right after he recorded one of the best results of his career, the New York native developed rhabdomyolysis, a breakdown of muscle tissue that Shi said came from training too hard without letting his body recover. He spent a week in the hospital and felt lethargic for the rest of the year. Training and matches became exceedingly difficult while he recovered, but Shi decided to stick with the sport.

It paid off. Shi eventually regained his strength and quickly improved. By the end of high school, he had posted a career high ITF junior tour ranking of No. 62 and participated in the main draw of the 2017 Junior US Open and the 2018 Australian Open.

In his first year of collegiate competition, he has been thrown straight into the fire, holding his own against some of the best college players in the country in Harvard’s first three fall tournaments. Months into his college career, Shi is confident that he will play high in the lineup this season. The Crimson’s season starts in earnest next semester, but it is already apparent that Harvard has something special in Shi. 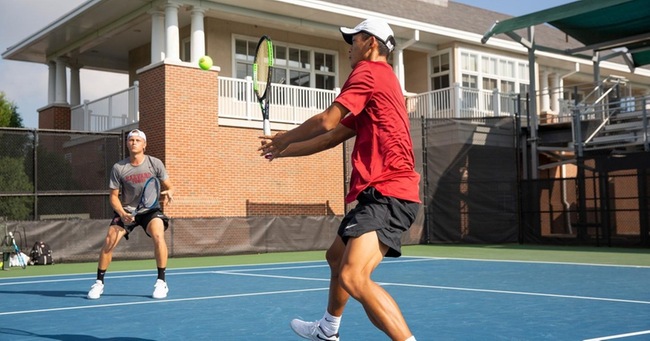 Since arriving at Harvard, Shi has taken on some of the top players on opposing teams. By Courtesy of Brian Shi

“Brian is very strong, very balanced, moves well,” said Harvard coach Andrew Rueb ’95. “He’s got an excellent serve that can be even more of a weapon. He’s got an all-court approach. He plays aggressive tennis. You can see him out on court and he can put together games and sets that can beat anybody.”

Co-captain Chris Morrow thinks Shi has hit the ground running and fits in well with the team.

“He’s adjusted really well and is engaging with the team in a really positive way,” Morrow said. “He’s really humble and is a really willing learner who is open to feedback.”

The Jericho native believes that he is still getting acclimated to college life both on and off the court. He pinpointed that the key difference on the court is that in college.

“You’re always playing someone good,” Shi said. “It’s important to stay confident all the time even when you’re losing more than you’re used to.”

Off the court, the standout freshman said that the transition back into a normal classroom setting and particularly having timed tests was initially challenging but that it was nothing he had not been through before. He added that he has really started to get used to the workload over the last few weeks.

Rueb believes that the freshman star’s untraditional high school experience will help him as both a student and an athlete going forward.

“He got a chance to manage his workload, his AP classes, and some of the other things he did.” Rueb said. “To do that on the road requires a very high level of time-management skills.”

Shi is excited about his future with the Crimson. As for what will come after Harvard, that is still up in the air, as it is for so many college athletes. However, the first-year has been giving it some thought.

“I think when you get into Harvard your priorities change a little bit when you’re an athlete,” Shi said. “I see a bunch of the older guys on the team are looking at jobs and interviewing for jobs, so it makes you think about what you want to do after tennis.”

But Shi is not closing the door on a tennis career after graduation.