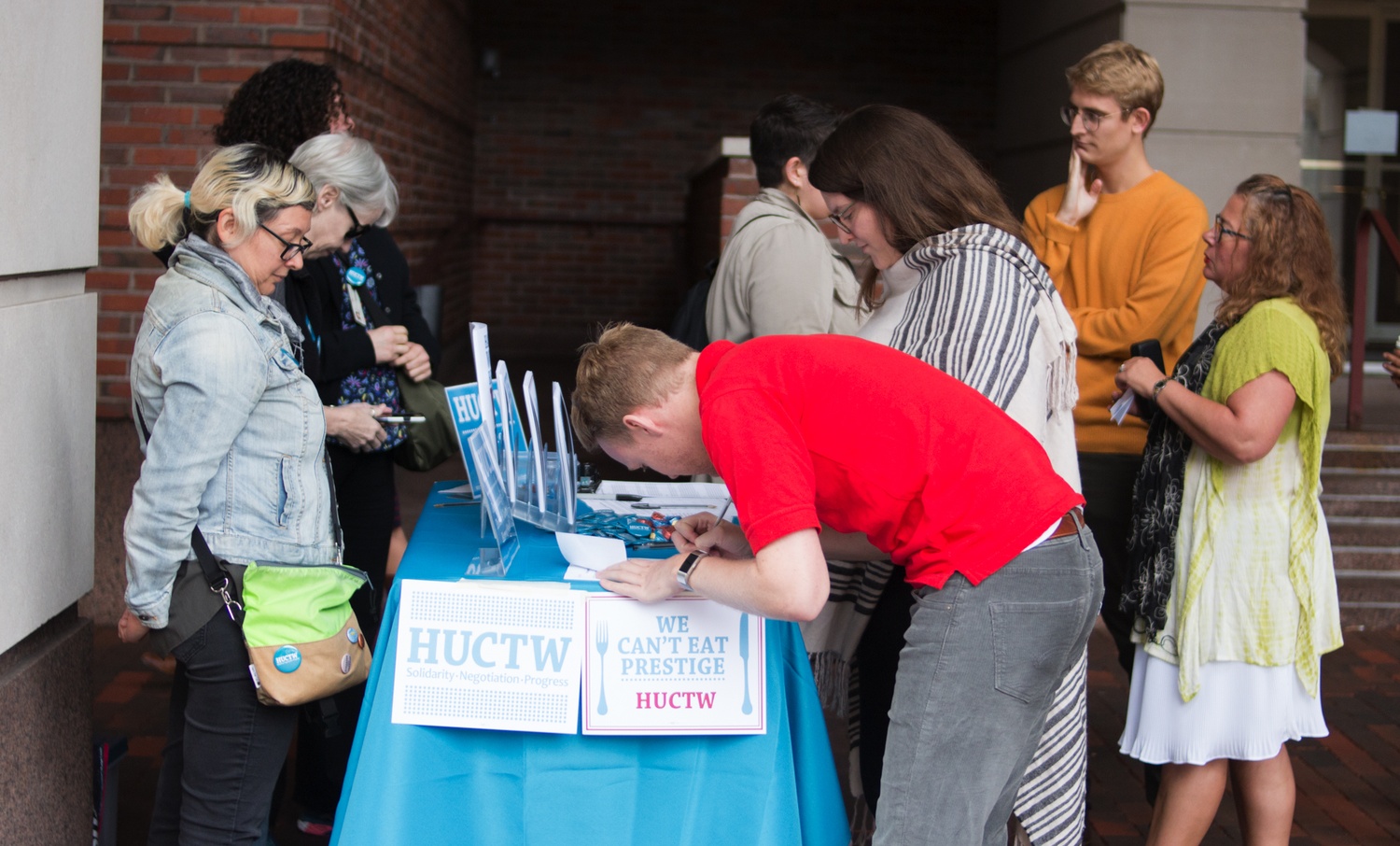 Members of the Harvard Union of Clerical and Technical Workers stationed themselves behind tables around campus Wednesday to garner support for continued negotiations with the University. By Caleb D. Schwartz
By Molly C. McCafferty, Crimson Staff Writer

After their old contract expired — and with no new agreement immediately in sight — leaders of Harvard’s largest union hosted events across campus this week to garner support for continued negotiations with the University.

At tables set up in the cafes and in the main thoroughfares of campus buildings across nine of Harvard’s schools, representatives from the Harvard Union of Clerical and Technical Workers encouraged members to sign a statement of support and to read up on the plan for negotiations going forward. Members were allowed to take "HUCTW" buttons and were encouraged to hang posters in their workspaces bearing slogans such as “INVEST IN STAFF” and “WE CAN’T EAT PRESTIGE.”

The last time the University and HUCTW negotiated a contract in 2015, bargaining continued for nearly four months after the expiration of the union’s previous contract. The 2015 contract, which was binding for three years, expired Sunday night.

The University and the union have agreed to keep members’ benefits in place in the absence of a contract, as they did during previous negotiations that stretched past deadline. But the lack of a resolution will delay any expected raises that a new contract might bring for union members.

The University and the union remain at odds over three central issues: wages, healthcare, and the use of contingent workers such as "temps." HUCTW President Carrie Barbash said many union members who stopped by HUCTW tables this week feel that continued negotiations over these issues are “in line with their priorities.”

“We’ve had really positive response from members,” Barbash said. “All the members who’ve been coming by the tables are very supportive, and seem to think we’re all on the same page.”

Barbash said the events around campus are meant to demonstrate that union leadership and negotiators “have the membership’s backing” in continuing to bargain with the University.

“We want to get as many people up to speed on what’s happening as possible,” Barbash said.

Union member Geoffrey Carens wrote in an email that he believes union members are in danger of being “nickel-and-dimed” in negotiations this year.

“Personally I'm very disappointed that the University hasn't been willing to make a deal with the union leadership, especially considering how modest HUCTW's goals are,” Carens wrote. “Union members were asking, ‘Where's our raise?’”

"The University is as eager as HUCTW to reach a resolution and has put forward fair proposals that ensure HUCTW members salary and range of benefits remain top of market," Jackson wrote. "We keenly understand the critical nature of the work members of the HUCTW perform for the Harvard community, and we are proud that they receive compensation and benefits packages that lead among Boston-area higher education institutions."

The daily tabling events, which began on Monday, will continue through Thursday afternoon. Though union leaders have not yet planned any “next steps,” Barbash said they are preparing for many possible scenarios.

“We could come to a resolution, and that’s what I think everybody hopes for, but it’s possible that we might not be able to do that right away,” she said.

“If we do need to go on for longer, it’s definitely the case that we’ll be asking for members to get more involved,” she added.