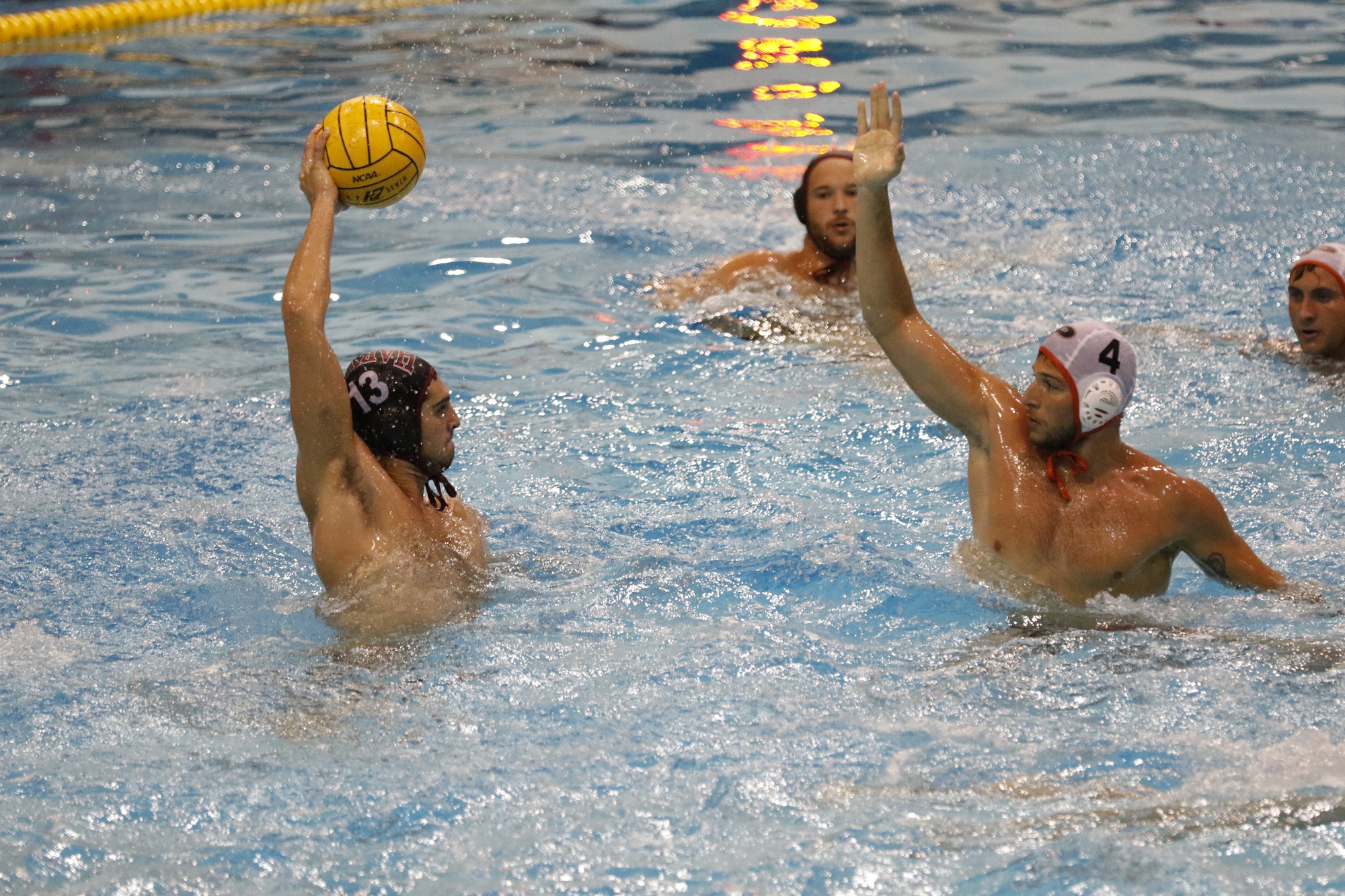 Junior co-captains Austin Sechrest and Bennie Seybold have led the team to a 19-7 record thus far in 2018. By Timothy R. O'Meara
By James Joyce, Contributing Writer

The California Kid shouldn’t even have been in the weight room that day.

For Austin Sechrest, mornings were forged in persistence. Early alarms? Not a problem. Back-breaking workouts? No big deal. Before-school training sessions? Bring it on. As three-year captain of the Capistrano Valley High School water polo team, Sechrest was used to the pain. Thus, even when sick, he saw it necessary to make it to morning practice––he may have been too ill to lift weights with his teammates, but nowhere near sick enough to skip out on lifting their spirits. Little did Sechrest know that much more than an upset stomach would come out of that early morning lift.

“I was really sick that day, so I wasn’t even lifting – I was just sitting in the weight room with my team,” Sechrest said. “That’s when I officially found out, via a phone call from the admissions office, that I was going to get in [to Harvard]. Right after I got the call, I told one of my buddies, and then he told one of my other buddies, and the whole team found out pretty quickly. We all left the weight room and told my coach that we were going to go get burritos to celebrate. Afterwards, I dropped everyone off at school and just went home because I was still really sick.”

For Sechrest, now a junior co-captain for the Crimson, post-victory celebrations are both a welcome and frequent part of his water polo career. Whether the enthusiasm comes from getting into Harvard or tossing the ball into the net during a high-stakes game, success has never had any trouble finding the former Capistrano Valley Cougar. Most recently, Sechrest had a signature moment in the squad’s Sept. 15 match against the California Golden Bears.

“Our peak this year was definitely beating Cal, the No. 3 team in the country at the time,” Sechrest mused. “I watched the video of it afterwards, and right when we won, the entire team jumped up in the same exact celebration at the exact same time, and everyone in the pool made the same exact fist-pump.”

The underdog victory against the Golden Bears was secured with two crucial goals from Sechrest. He not only sent the match into extra time with a buzzer-beater past the goalkeeper, but scored the game-winning golden goal in the second overtime period.

“it was incredible, something that just shocked the water polo world for sure,” Sechrest said. “The Big Four, which is UCLA, USC, Cal, and Stanford, is generally considered untouchable for East Coast teams, so to pull off that win was really special.”

However, as team captain, Sechrest has found himself in an unusual spot. Because both he and his co-captain, defender Bennie Seybold, are juniors, the Harvard water polo squad is one of only two Crimson teams in history to not have at least one senior captain. Though this situation certainly comes with its obstacles, Sechrest credits much of the team’s recent success with Seybold’s position as a role model.

“Bennie’s a great guy – he’s one of my roommates and my closest friends,” Sechrest said. “He’s just one of the hardest workers I know, which is why he got elected captain in the first place. He was coming off an injury last year and wasn’t able to play, but every day we saw how hard he was working to get back. He definitely has kept that up and leads by example really well.”

The hallmark of the co-captains’ tenure has been their ability to foster camaraderie among members of the team. As captains, not only must Sechrest and Seybold promote conviviality between those who have been on the team before, but they must also ensure that new team members seamlessly mesh with the rest of the squad.

“I think we’re getting into a part of the season where we’ve all spent a lot of time together, which is great,” said Nathan Ondracek, a senior attacker on the team. “I think the freshmen are fully integrated into our system and the existing culture.”

However, Sechrest credits much of his success in creating a coalescent team to the nature of past Harvard water polo squads.

“In general, over the past couple of years, we’ve had a really strong connection between teammates; we’ve had great team camaraderie,” Sechrest said. “The team is just a fun group of guys to be a part of and we love going out there and battling together.”

Because water polo is a sport that relies on quick and efficient communication between team members, an atmosphere of trust and unity is essential to ensuring long-term success. According to Ondareck, the bonds between his teammates have been integral both in and out of the pool.

“Having this really close team has definitely helped us in games,” Ondareck said. “We’ve been able to play our best in everything from reading what’s happening in games to making passes and interpreting body language.”

Of course, fostering a close team environment has certainly not been easy for the junior captains. As third-years, they must straddle the fine line between leading the squad through games and working with their fellow seniors.

“[Being captain as a junior] can definitely be tough, as it’s been a lot of balancing leadership with dictating in a sense,” Sechrest admitted. “At first, it was tough to find a balance between the senior leadership and myself and Bennie, but I’d say that as the season’s gone on, the seniors have really stepped up and done a great job of leading me as well, and I’m really appreciative of that. We all get along well and have been able to join and lead the team together.”

Though the responsibilities of a captain involve serving as the foremost role model for his team, Sechrest and Seybold are not the only water polo players that have stepped into this position. Rather, many of the seniors on the squad have found their place as example-setters for younger team members.

“When we’re in a close game, we need leaders that lead by example and get the team fired up,” Ondareck said. “We have plenty of people doing that, including seniors, so that’s been very helpful to our success.”

However, for the Crimson, the real work is just beginning. Though the team is still focusing on the regular season games that lie ahead, its eyes are set on the upcoming NEWPC Championships.

“We started the season off really strong with a couple of signature wins, but since then, we’ve hit a lull over the past couple of weeks,” Sechrest said. “I’d say we bounced back pretty well this past weekend, and we’re definitely trending up as we’re going toward our conference championship tournament.”

For Austin Sechrest, the transition from Cougar to Crimson has been anything but easy. However, the persistence that he embodied over the course of his high school years has certainly carried over into college. Going into the postseason, Sechrest’s drive will be essential in nailing down yet another one of his celebration-worthy victories.