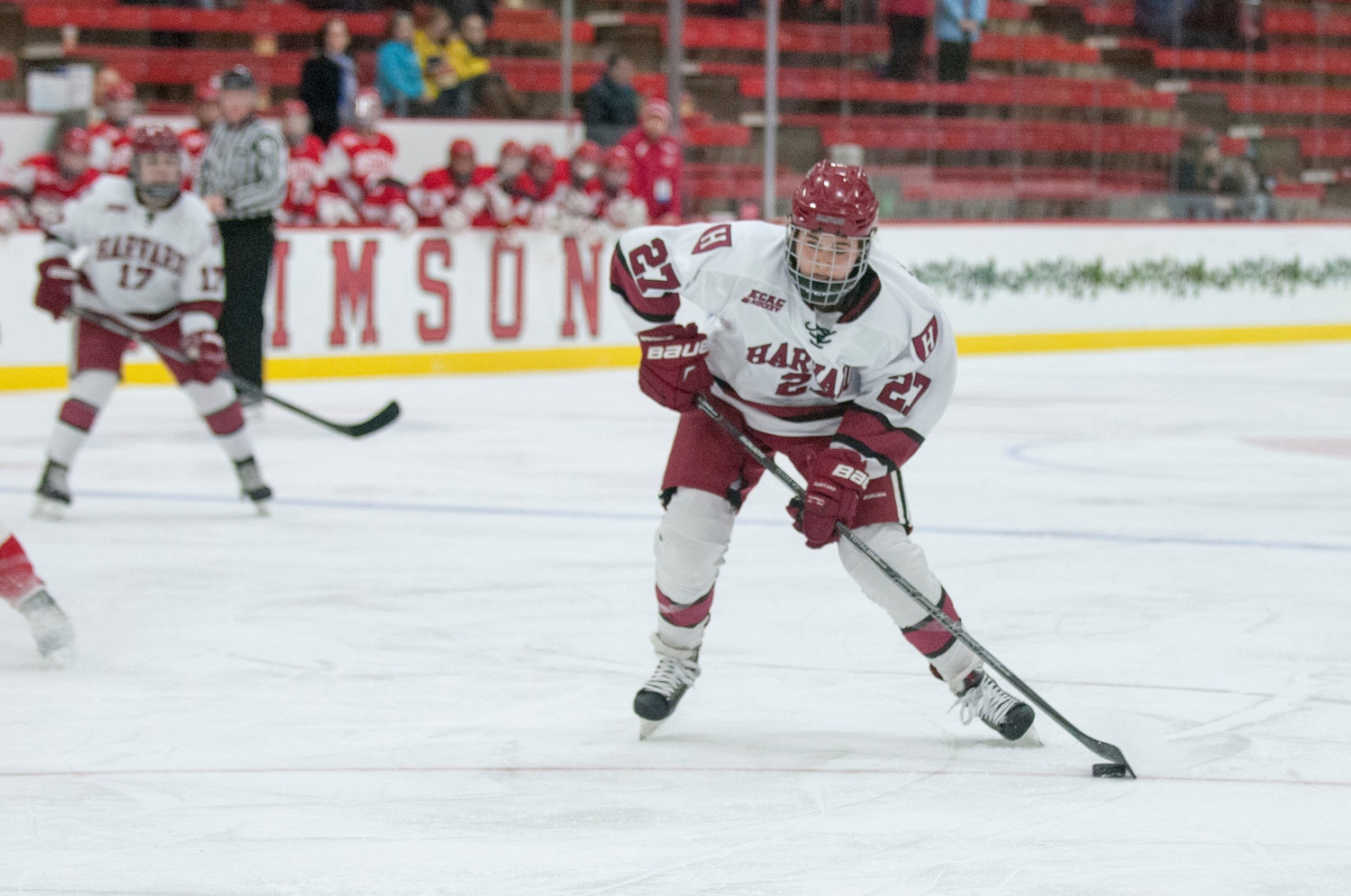 Senior Karly Heffernan played ice hockey all her life until her career-ending injury. Even before her time for the Crimson, she had her share of accolades, having won two gold medals with the Canadian U18 team at IIHF Worlds. By Mark Kelsey
By Matthew Mu, Contributing Writer

From a young age, Alberta native Karly Heffernan, now a senior, had already set her sights upon a dream which many athletes aspire to achieve. Like many, she had grown up with the sport, devoting countless hours to something she loved — ice hockey.

“Karly, from day one, when she was barely old enough to talk, would absolutely go crazy,” James Heffernan, her father, remembers. “She couldn’t pronounce it right, she would go ‘awkey awkey.’ When she was first learning how to skate, I would have both her and her brother in my arms, and what’s interesting is that most kids start crying when they’re on the ice. They don’t want to be on the ice. Her brother wouldn’t stop crying until I picked him up. But not Karly. You just knew she belonged on the ice.”

“I grew up in Alberta, Canada,” Heffernan said. “Everyone plays hockey. I actually don’t [remember my first time on the ice]. It’s crazy. I remember morning practices at 6 a.m. in the cold small town [in] Alberta. My dad would come into my room and I wouldn’t wake up and then he would say I have hockey and then I would spring out of bed. He always tells that story, but I really don’t remember a time I wasn’t skating because we had an outdoor rink outside of our backyard and I genuinely think I skated as soon as I could walk.”

In the fifth grade, Heffernan joined a sports academy, an experience she called her childhood dream. In high school, she joined the Vimy Ridge School for Athletes in Calgary, enabling her to travel throughout the United States playing a sport she loved with a team she grew up with. At age 16, she joined the Canadian National Team, playing in her first world championship.

“It was in Finland,” Heffernan recalled. “It was the craziest experience ever because it was my first time overseas and I was the youngest member on the team. In the gold medal final, we went into overtime with the United States, which was crazy. I was put out with my teammate Hanna Bunton (Cornell ’17) and she passed me the puck and I actually scored the overtime goal. It was the coolest thing of my entire life.”

In her first season for the Crimson, Heffernan earned 20 points (9–11—20) through 35 games, registering a career-best four points on two goals and two assists in the 7-1 win over Brown on Feb. 7. In the 2015 ECAC Championship game, the team felt her presence through a tally and an helper as Harvard claimed a 7-3 victory over Cornell. As a sophomore, she scored in the second ECAC quarterfinal game at Colgate, capping off the season with 24 points (8–16—24) through 32 games.

Following that season, Heffernan was invited to a Team Canada training camp in May. Near the end of an intense day, she felt a pop in her foot. Nothing too out of the ordinary, and definitely nothing that she felt she couldn’t overcome. It was only months later, at the start of the 2016-2017 fall season, when doctors found that her stress fracture had become into a serious fracture, leading Heffernan to decide to take a year off.

“The decision was made that day by me and then the coaches were all for it,” Heffernan said. “It was an immediate yes, go for it. The entire team and all the coaches were all very supportive. They were incredible, and they are by far a family to me. Hockey is so much more than a sport to all of us. It’s 100% like family.”

After her surgery, Heffernan’s mindset changed. With her first major injury and surgery, she was prepared to come back stronger than ever. “It was go time. For the first time in my life, I really felt like I was the underdog. For me, it wasn’t the end of the road, just a roadblock.”

“My really good friend used to send me ‘CTC’ — control the controllables,” Heffernan said. “I think it really resonated with me because I had zero control over the situation. I focused on controlling what I could: my recovery progress and my mental state.”

Heffernan knew where she wanted to be. “[Being on the ice] was just so natural to me. I felt like it was my second home. Nothing else mattered when I was on the ice and that was a huge thing for me. I was going to be back [on the ice].”

Following a year off to rehab her foot, Heffernan came back prepared to play in the 2017-2018 season. However, continued pain required her to undertake a second surgery on her foot, once again sidelining her for the entire season. After heavy consideration with friends, family, teammates, and coaches, Heffernan decided to take a step back from hockey.

“I remember the day that I told my coaches and team,” Heffernan said. “That was when it felt like my final decision. I remember getting in the car with my dad and I broke down. In almost an instant it’s gone. It’s gone. People always want to say to not let it be part of your identity, but [hockey] was a lot of who I was. And that was so okay with me.”

“I have not really skated since August of 2016,” Heffernan said. “I haven’t been on the ice for more than a year. At first it was medical and now I’m at a point where I’m almost scared to.… But I don’t miss it too much right now, which is really strange.”

After over two years off the ice, Heffernan has now embraced the other aspects of her life as a college student.

“I’ve been able to take different classes because I’m not practicing all the time, which has been really cool for me,” Heffernan said. “I’ve also managed to find a job. I don’t think I would have been able to do that if I was in a sport, to be honest. I’ve just put my focus on different things this semester especially which has been huge.

“However, I feel as much a part of the team as I did when I was playing. Some of my best friends are still on the team. I go to team events. Whenever I see them it’s the same feeling; the atmosphere we’ve created, the culture that we’ve created. Even if you’ve left the team, they’re still going to support you 100%. They’ve been my biggest rocks and anchors throughout this entire process.”

In making the transition from hockey player to college student, Heffernan noted that finding a new identity outside of sports was something that many athletes unfortunately experience.

“I think it’s a very common thing that students experience, unfortunately,” Heffernan said. “They are left to find their new identity outside of sports while still attending college. I think it’s one thing to be done with sports after college because you know it’s coming, but it’s a whole other thing to be done before when you don’t know it’s coming. Nothing can prepare you for having your routine that’s defined your life for such a long time to just simply vanish.”

“I wanted Karly to know that everyone retires from a sport like hockey,” her father mentioned. “Some people play it longer than others. For some, it’s something you stop at age 20 or even at age 30. But everyone retires from hockey at some point. Luckily, Karly has been able to focus her life on new things, but hockey will always be a part of her. Hockey really prepared her for everyday life. Life is full of great achievements and great disappointments. And that’s life. And that’s what hockey is like as well.”

Since retiring from hockey, Heffernan has stepped out of comfort zones and has been able to refocus her priorities onto building closer relationships with family and friends that are outside of the sports world. Her roommate, senior Jill Scyocurka, faced similar hurdles through her time at Harvard. Coming in as a lacrosse player, she had suffered several torn ligaments in her knee at the end of her high school spring. As such, she eventually shifted her focus onto sailing in her sophomore year. But after a herniated disc this summer and fall, Scyocurka realized that she couldn’t continue athletics in her final semesters.

“It was hard at first to imagine what my experience at Harvard would be like,” Scyocurka said. “At first, I was really frustrated; it felt like I was wasting time and not appreciating my experience at Harvard. But I’ve realized how lucky I was to have such great friends. I really spent that extra time [outside of training] solidifying my friendships and relationships. It’s been so nice to focus on my friends and teachers here at Harvard. I even took an acting class that I’ve been wanting to take since freshman year.

“There’s always a silver lining. If you have faith that whatever you open your life up to, you’ll find a new passion, you’ll learn more about yourself that you never knew. Sometimes devastating news can be such a blessing in disguise.”

“I wouldn’t take back anything,” Heffernan said. “I think what I’ve felt without [hockey] is almost relief because the pressure of it is insane. It’s allowed me to find new things and I think that’s the only way to go about things. When you’re going about a huge change, you have to focus on what life is giving rather than what it’s taken from you. Life’s full of changes and you can never expect any of them.

“I grew up playing hockey for my whole life; I don’t remember a time when I wasn’t on the ice. I played it until I was 21 years old and now I’m on this new journey to find my new passions."