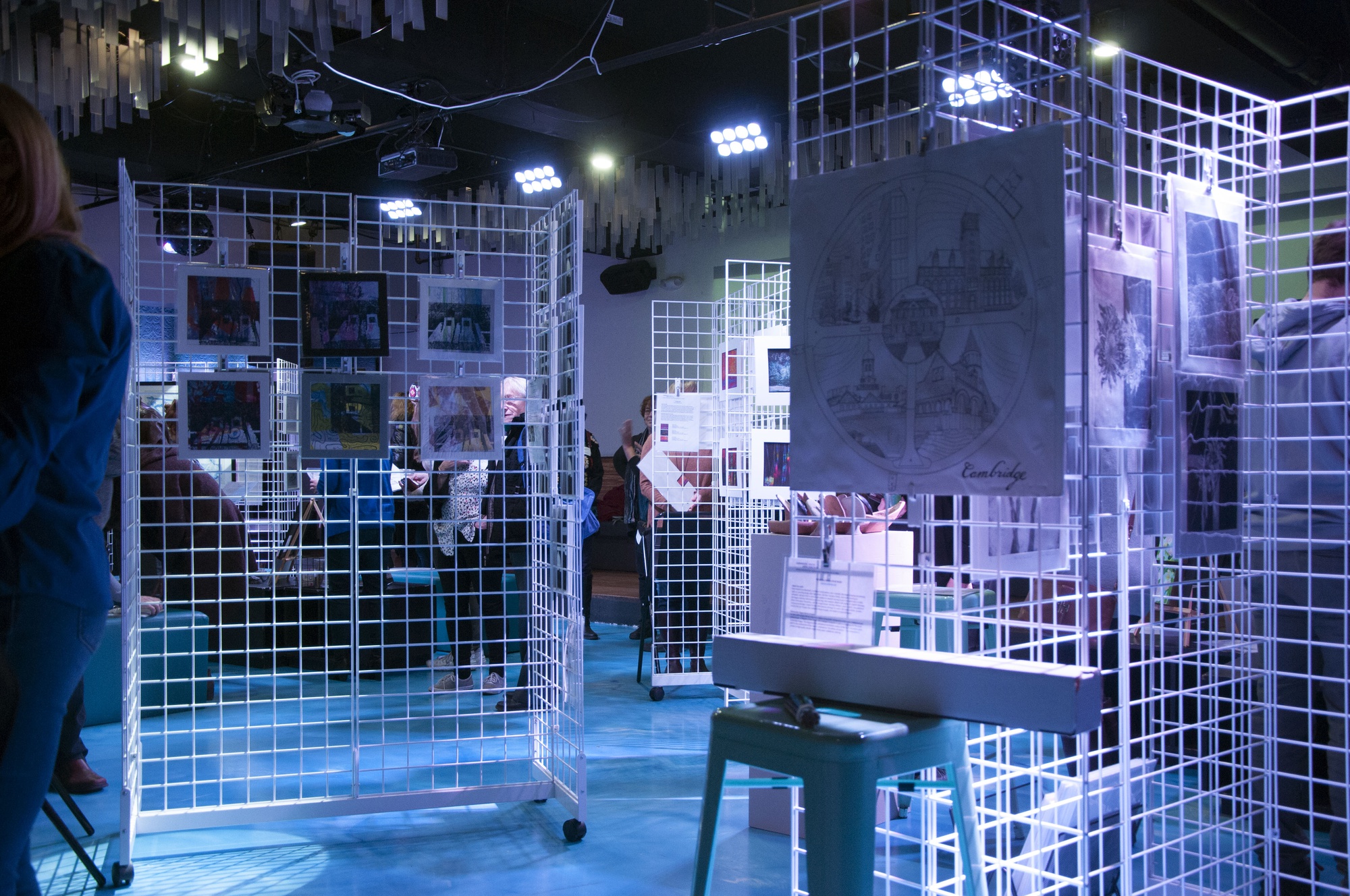 The “harvest” featured at this market, however, isn’t farmers’ produce. Cambridge’s Community Supported Art is a unique program — purportedly the only one of its kind in the country — that sells local artwork using the traditional farmshare model.
By Scott P. Mahon

Illuminated shards hang from the ceiling as Cambridge’s annual Harvest Party begins. Family, friends, and local residents gather at La Fábrica Central in Central Square to browse the marketplace’s newest offerings. The mayor of Cambridge, Marc C. McGovern, takes the stage to offer his support and admiration for the program while waiters roam the aisles offering hors d’oeuvres to the guests.

The “harvest” featured at this market, however, isn’t farmers’ produce. Cambridge’s Community Supported Art is a unique program — purportedly the only one of its kind in the country — that sells local artwork using the traditional farmshare model.

The program started in 2016 as part of the Creative Marketplace initiative, a group of three programs meant to revitalize arts in Cambridge and fuel the economy through artistic ventures. Community Supported Art offers a way to recognize individual local artists in Cambridge and showcase their roles in boosting the city’s innovation economy. The program also aims to connect artists in Cambridge with each other and build a stronger network of support “so that everyone is able not just to survive but thrive,” says Jason Weeks, executive director of Cambridge Arts and founder of the program.

The artists are handpicked by a professional jury comprising art experts and corporate sponsors. The seven artists selected are then given one-on-one and small-group assistance during professional workshops throughout the year. The project culminates when the artists create 25 pieces and exhibit them at Harvest Party.

Weeks lists off the three primary goals of the program: value, connection, and recognition.

“On one hand, we work with the original artists. We help train them, help them network, and help give them the one-on-one and small group attention they need to thrive. On the next level, it was to help connect the work to the office, business, and corporate retail space here in the city because those natural pathways don’t always exist,” he says. “The last part was just to make sure we were crossing the threshold and getting the folks the most out of the marketplace.”

Gretchen Adams, a Cambridge resident who attended the event, says, “It’s a really cool idea to have people buying art the same way they would buy vegetables. It’s a part of life… and spreads a lot of support to the artists to help them market themselves.”
Emily Cobb is one of the artists who participated in Community Supported Art this year. Cobb, who specializes in painting and drawing, says the program helped her develop her skills and made her feel appreciated and welcomed.

“It makes the artists feel supported in our work here in the city,” she says. “Being able to be connected to different resources, have a venue to reach people with my art... and meet amazing artists has been really awesome.”

It may strike some as odd to buy and sell artwork like a basket of vegetables. Weeks, however, says he believes that bringing art — and artists — into public spaces where they can interact with people in the community only serves to enhance the creative environment in Cambridge.

“I think the idea that it looks at art as something transactional is a good thing. I think as long as people think artwork happens as some form of alchemy or magic and is not done by real people, it’s not going to be something that they feel like they can access,” he says. “But this [program] gives us a common platform and a common marketplace where we can connect all the dots to the different audiences along with the artists.”

Donna Socha, a Harvest Fest guest, said she believes this program is needed to maintain the artistic community in Cambridge. She noted that rents are on the rise in the area and says she worries that “we’re going to lose our identity as a funky town unless we retain our arts population.”

In the spring of 2018, average rent in the Greater Boston Area increased by more than 4 percent as compared to the same time period in 2017, according to a June 2018 Boston Globe article. This increase is marginally higher than the rate of inflation and has the potential to force out many artists if they cannot make a living by selling their work.

Programs such as Community Supported Art, however, allow Cambridge to maintain its status as a city that supports and promotes creative endeavors. Weeks says he believes Cambridge’s artists add to the diversity and depth of the city in the same way that Harvard’s professors do.

“These are folks whose creative work and creative instincts are no different than the creative instincts and work of scientists or technologists or education folks from the university,” he says. “They just don’t get acknowledged as such. And by the time we wring our hands and pull our hair, I’m worried they will have to leave Cambridge because it’s too expensive. It’ll be too late.”