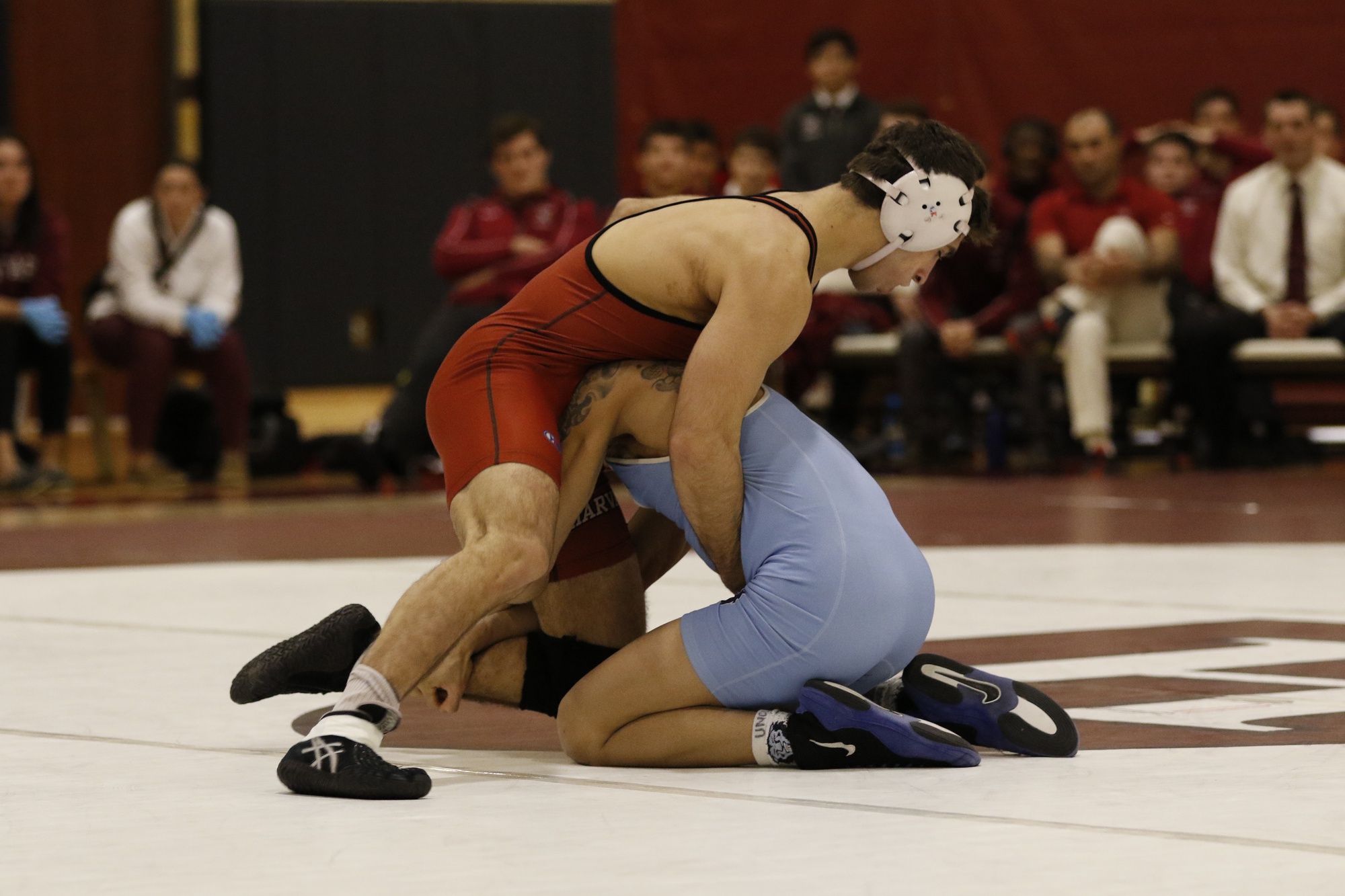 The Crimson holds the distinction of having earned the highest cumulative team GPA in the country for three years in a row. By Timothy R. O'Meara
By James Joyce, Crimson Staff Writer

That’s how far away Hunter Ladnier was from securing a spot in last year’s NCAA Championships. Though the Crimson combatant clawed his way to the top of last season’s NCAA qualifiers, he was ultimately taken down by Navy’s Jared Prince in his semifinal match.

However, Ladnier, now a junior and captain of the Harvard wrestling team, plans on turning that around this year. Having made it to the NCAA Championships during his freshman season, a successful run at this year’s EIWA Championships would secure a second appearance in the NCAA tournament for the Ohio native. And, according to Harvard wrestling coach Jay Weiss, the premier competition in college wrestling may just be coated in crimson this year.

“When we drew it up in the preseason, we saw that a lot of guys have the potential [to go to the NCAA Championships], but they have to be doing the right things,” said Weiss, who is beginning his 25th year with the team. “I’m very confident in a lot of guys on the team, like our captain Hunter Ladnier, who’s a junior. He qualified as a freshman and barely missed out last year, and I’m definitely liking what I see out of him right now. We also have a couple guys that placed at the EIWAs last year that have a lot of potential this year: Nolan [Hellickson] placed, and Brock Wilson placed last year as a freshman, so he’s got a great shot as a sophomore.”

For the Crimson, the journey to the NCAA Championships is a long one. Because the wrestling season doesn’t truly begin until mid-November, the team’s preseason training is “very long,” as Weiss puts it. However, this drawn-out practice period just adds to the wrestlers’ dedication.

As the wrestlers prepare for this weekend’s Jonathan Kaloust Bearcat Open, Harvard’s first bout of the season, the competitors in crimson are enthusiastic to break from their typical schedule.

“Practice is great a way for us to see how the wrestlers are against each other, but now we get to go out and see how they carry out a team plan and adjust,” Weiss said. “I feel that a tournament like this weekend is worth two weeks of practice. I think the team’s mentality is very hungry and excited — it’s a relief to get out of our practice routine and start competing.”

Though the team differs from other Crimson squads in that it lacks a substantial senior class, the Harvard team is expected to be one of the best in the Ivy League this season. Weiss cites the experience of his juniors and sophomores, along with the potential of his team’s freshmen, as overall strengths for the squad.

“We got some freshmen that are going to be a surprise on the lineup,” Weiss said. “It’s very exciting when you see someone which that kind of high level ability at that age. Josh Kim is a freshman and already doing great things, and we have a lot of guys that really can do some damage at the end of the year. It’s really just a matter of how we navigate the season.”

However, wrestling isn’t the only activity that the team has been focusing on. The Crimson holds the distinction of having earned the highest cumulative team GPA in the country for three years in a row, an achievement that the squad holds high. This year, Harvard plans on turning three years straight into four.

“Six out of the last seven years, we’ve had the number one [GPA in the country], which is a goal of our program,” Weiss said. “[The team is] expected to do that, and they understand that that’s their goal. I think it just goes hand-in-hand with a commitment to being great — being great on the mat, being great in the classroom, and being a great person.”

This mantra of being great is one that Coach Weiss repeats frequently. Ask any Harvard wrestler and they’ll tell you that striving for greatness is the team’s foremost ambition, both on the mat and in the classroom.

“Coach Weiss expects that you’re going to be great both inside and outside the wrestling room, so guys work hard in the classroom,” Ladnier said. “We have an academic committee, where we have certain guys on the team that make sure everyone’s on top of their work. You can come here to just be a wrestler, or you can come here and try to be great. Coach Weiss really emphasizes how important it is to be great and to work hard outside of wrestling, so obviously we’re going to put work in outside the wrestling room.”

As the wrestlers head to Binghamton, N.Y. this weekend, Coach Weiss’s mantra will almost certainly be on their minds. After months of tough training and impassioned practice, the Crimson is ready to face its first battle. And for the Harvard wrestlers, greatness is only a few pins away.