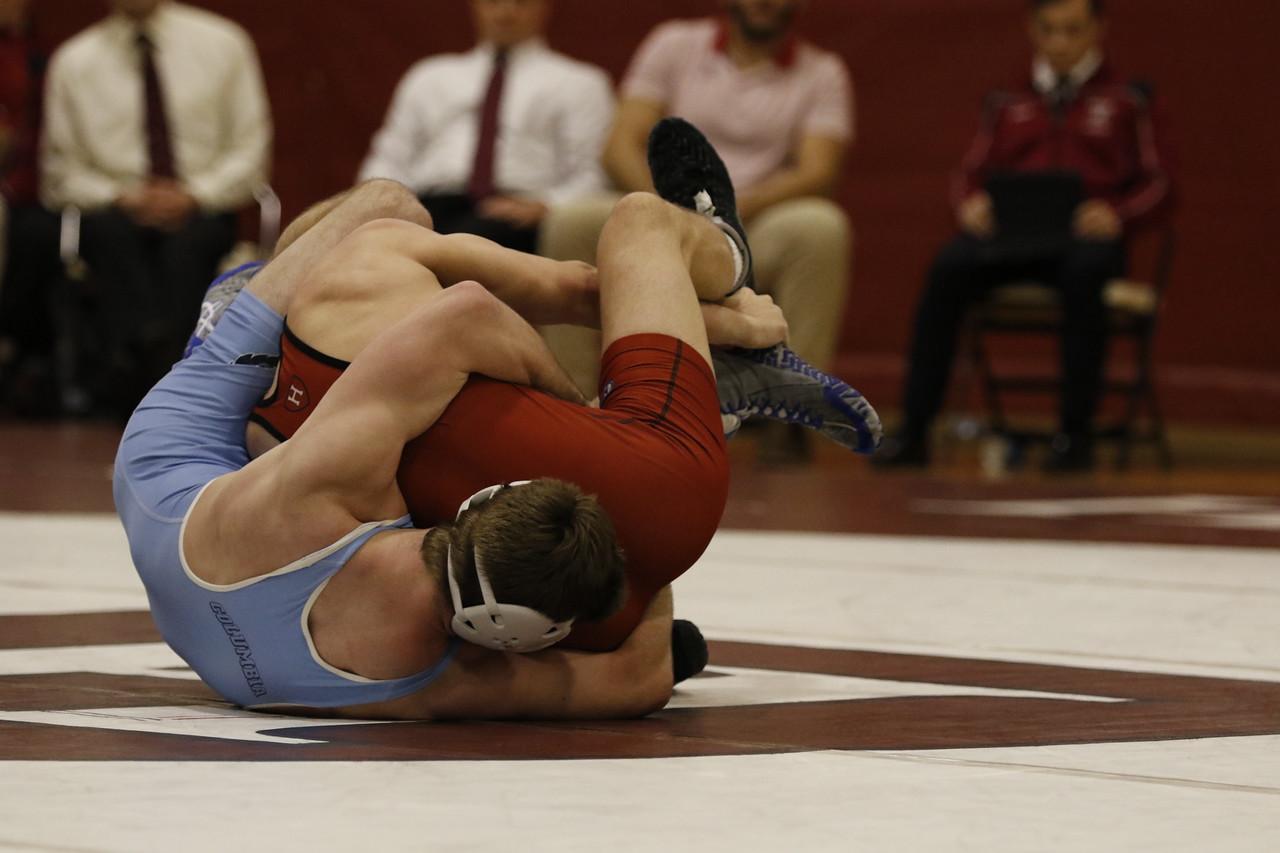 Harvard battles Columbia for the advantage in wrestling matchup earlier in the season. By Timothy R. O'Meara
By Ronni Cuccia, Contributing Writer

Following last week’s win over Ivy League rival Brown, the Harvard wrestling team headed down to New York this past weekend to take on Columbia and Hofstra in their final two duels of the season.

Following its dual against the Lions, Harvard took to the road to compete against the Pride (10-10, 4-4) for a evening showdown. The Crimson dominated the competition, winning 8-of-10 matches to defeat Hofstra, 25-9, improving Harvard’s record to 6-4.

“Guys on the team were pumped about this weekend,” Dean said. “Obviously, you always are when you come away with two wins, but I think the way in which we won against Columbia and Hofstra really spoke to how hard we’ve been training this year, and how everybody is committing to a high energy style with a lot of offense.”

Harvard performed well in its match earlier in the day as well against fellow Ivy League opponent the Lions (3-14, 0-5).

On Saturday afternoon, the Crimson defeated Columbia 18-13 in a match that went down to the last bout. The victory gives Harvard a perfect record in its last 3 matches.

The Crimson started off strong against the Lions with back-to-back wins by sophomore duo Jaffe and Ladnier. The duel between the two teams went back and forth and ultimately came down to the last match. At 133 lbs, Friedman came in clutch, sealing the dual meet win with a third period takedown to defeat the Lions’ Alec Kelly in the final minute of the match.

“Going into our last two matches, we knew we needed to win both to come out on top,” Friedman said. “Nolan [Hellickson] wrestled well and I just wanted to keep that momentum going. I gave up the first takedown but the coaches and so many Harvard fans were pushing me through the entire match. Coming out on top against an Ivy League rival was a great day for the program, and being in the situation I was in just makes it all the more special.”

Hellickson competed in the 125 weight class and won his bout 9-2 against Spencer Good. Tarsi defeated Columbia’s Laurence Kosoy in the 165 weight class in a sudden victory. Dean won his bout as well in the 184 weight class. During the match he was trailing by one with 12 seconds left, but earned the win with a takedown of the Lions’ Andrew Psomas.

The two wins helped boost the confidence of the team and prepared the Crimson for its next competition. It also motivated the team to stay on track mentally and physically as it prepares for EIWA Championships in two weeks.

“Obviously going 2-0 in a weekend, when our team has EIWAs in two weeks, gives us a lot of momentum going forward,” Friedman said. “The EIWA championships is what our team trains and focuses on peaking for the entire year. We are confident in our training and our coaches’ philosophy. Given the results from this weekend, our team is ready for EIWA in two weeks.”