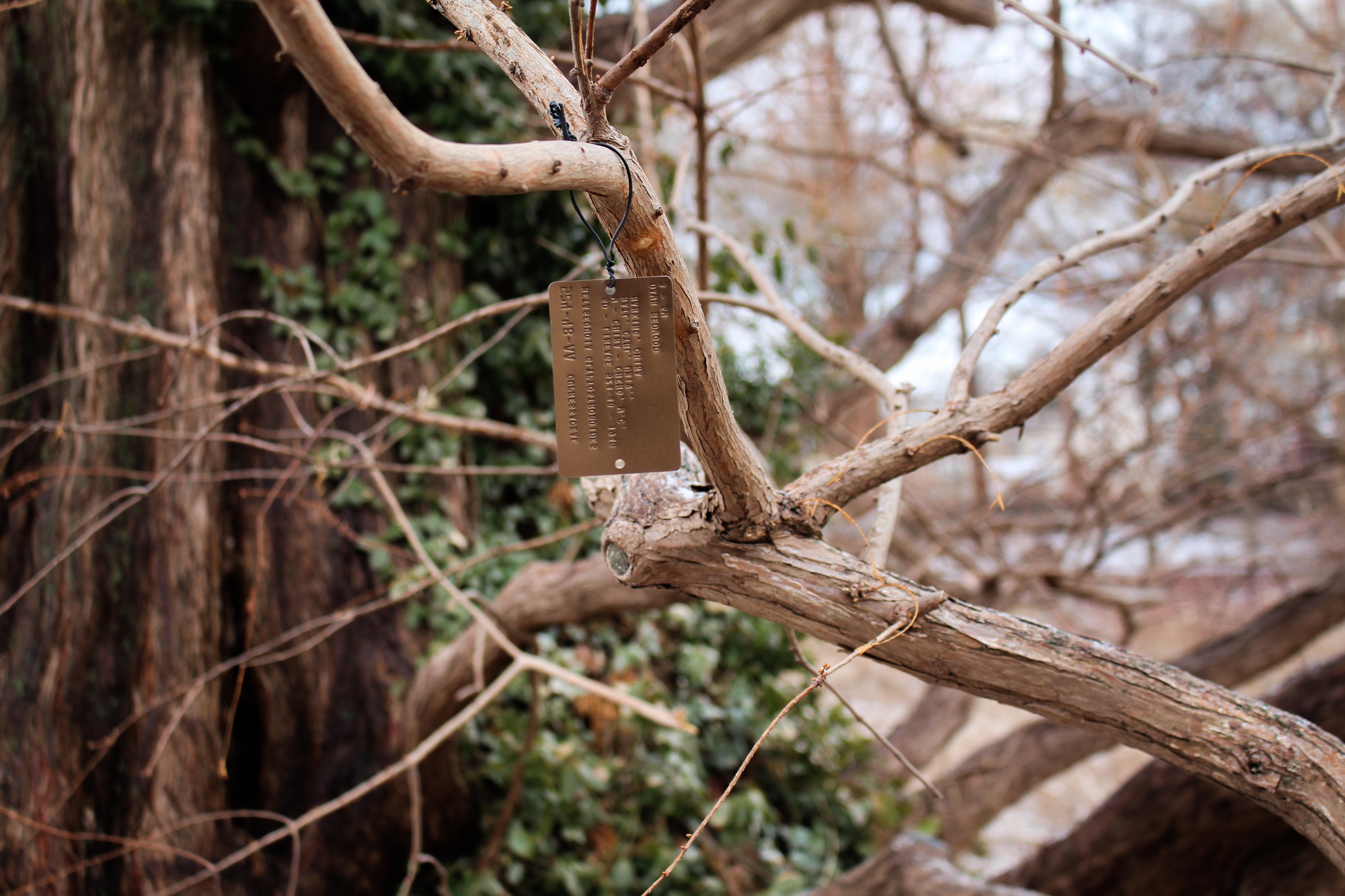 Like other plants at the Arnold Arboretum, metasequoia trees are marked according to the year their seeds are received. By Hayoung Hwang
Advertisement
Advertisement

“People still talk about it, because it really is an exemplar of collaboration, of discovery,” he continues, as we stare up the trunk through the (now bare) branches.
By Frank M. Cahill

Despite the morning chill, Dosmann, Keeper of the Living Collections at Harvard’s Arnold Arboretum, talks animatedly about the grove of unusually tall trees before us. His passion for living things is palpable. “The beauty about plants is that plants you can share,” he says. We’re standing, feeling small among these cousins of the redwood: Metasequoia Glyptostroboides, to be exact.

Dosmann points out the unique flame-shaped silhouette of the metasequoia—also known as the dawn redwood—and its ascendant branches. Touching the bark, he describes the fluted trunk as “almost muscly.”

“It reminds me of an Ent,” he jokes, citing the tree-men of ‘The Lord of the Rings.’ “Actually, it picks itself up and walks around at night, and shows up here at dawn.”

I could believe it. These towering trees—upwards of 200 feet tall—possess an air of myth. Standing at the Arboretum’s entrance, they could very well be its guardians, protecting against the city’s slow encroachment.

The Metasequoia Glyptostroboides has not always made its home in Boston. In fact, we should be grateful it has a home at all: in 1941, the world thought it extinct. And it might have remained that way, if not for the Arnold Arboretum’s intervention.

First discovered via fossil record in Japan, the Metasequoia genus was thought to be a relic of the Miocene. Over the next five years, though, specimens of an unknown tree—locally termed the ‘water-fir’—were recorded by Chinese scientists in Hubei Province, China. Their connection with the newly discovered fossil had not yet been made.

Hu Xiansu of the Fan Memorial Institute of Biology in Beijing, along with Wan-Chun Cheng of the National Central University in Nanjing, were the first to identify the ‘water-fir’ of Hubei Province as a species of the long-lost Metasequoia genus. Hu graduated Harvard with a Ph.D. and returned to China in 1925. “A number of the founding botanists in China were actually trained here at Harvard University, so it’s a long running collegial collaborative relationship,” Dosmann says.

Tapping into the momentum surrounding the discovery of this “living fossil,” the Arnold Arboretum funded Chinese scientists’ collection and preservation of these precious seeds. The venture was a success. The scientists collected and sent about one kilogram of seeds back to Harvard for safekeeping.

A grove of these trees took root in the Arboretum in 1948. Boston and China share a continental climate—Dosmann describes China’s climate as “magic”—which means that flora thriving in China tend to thrive here, too. This coincidence of weather fostered a deep academic relationship between universities in rival nations through the Cold War.

“It was a tough time to be in China: the Revolution was going on, it was the end of World War II, and we hadn’t had any of our botanists there for a decade or so,” Dosmann says. The metasequoia was reason enough to renew those ties.

Founded in 1872, the Arnold Arboretum is an international center of botanical collaboration. Celebrating the “comprehensive nature” of the collection’s catalogue, Dosmann says, “We’re one of the most celebrated arboreta on earth because of that diversity.”

The history of the Metasequoia Glyptostroboides is representative of the Arboretum’s mission to educate and conserve. “The metasequoia is in our DNA,” says Dosmann. In fact, the tree which appears on the Arboretum’s crest is none other than the dawn redwood itself.

Dosmann notes the Arboretum’s continued international efforts, citing in particular its work with the Chinese Union of Botanical Gardens.

“We’ve actually just instituted an exchange program so that one or two younger professionals working in the gardens there can come over here and spend some time learning about what we do with respect to horticulture, arboriculture, plant collections management and curation. And then they can go back to apply [that knowledge] to some of their collections.”

“Harvard University has been working and collaborating with scholars in China for a long time, and some of the longest running relationships are actually with the Arnold Arboretum, going back over a century,” he adds. Dosmann returned from an expedition to Sichuan Province this past fall, marking his eighth trip to China.

The purpose of his most recent trip was to seek out rare plants. But the metasequoia is never far from the spotlight.

“People still talk about it, because it really is an exemplar of collaboration, of discovery,” he continues, as we stare up the trunk through the (now bare) branches.

Set against the bone-white winter sky, the trees’ reddish bark is striking. This particular tree was grown from the original 1948 seeds, Dosmann says; it’s difficult to imagine that this giant could once have fit in the palm of my hand.

“Maybe even among all of Harvard University’s collections, [the Arnold Arboretum] is the most significant of its kind. There’s an amazing natural history museum at Harvard, beautiful glass flowers and things like that, but one might not say that that’s the most significant natural history collection on earth,” Dosmann says. “The art museums are fantastic, but you gotta say, is that better than the Met, or the Louvre?”

With the Arboretum’s 98 metasequoia and roughly 15,000 plants in-ground, his point falls on fertile ground.