As the opioid epidemic rages, Harvard researchers and educators are working to better understand the phenomenon and to teach students how to fight against it.
By Luke W. Vrotsos 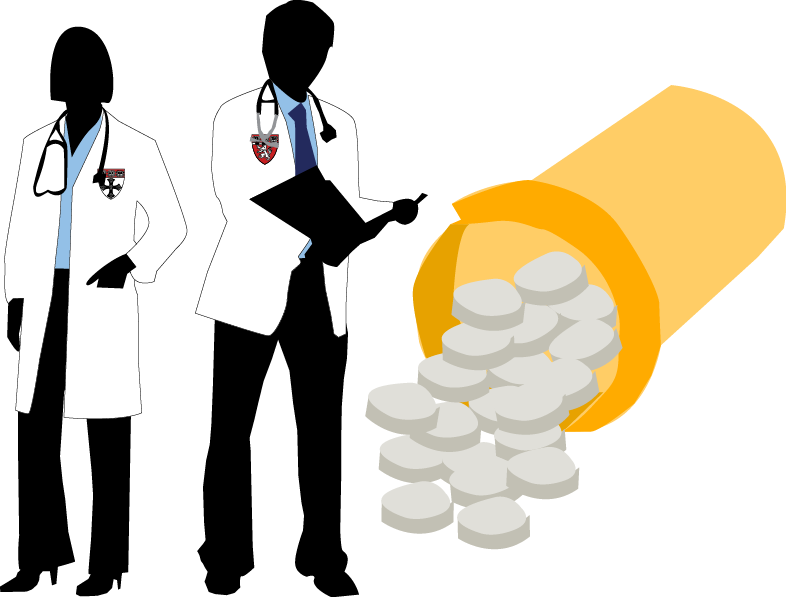 Speaking softly in a small, dark studio on the tenth floor of the School of Public Health’s Kresge Building, United States Surgeon General Jerome M. Adams did not soften the statistics.

“Four people will die from overdoses in the time that we’re having this conversation today,” Adams told the audience of roughly 50 students, physicians, and researchers, all gathered on campus Jan. 25 to hear him discuss the opioid epidemic currently sweeping the country.

Nationwide, an average of 115 people die every day due to opioid overdoses. The epidemic—which began around 2013 and 2014, according to data compiled by the New York Times—has hit rural New England and Appalachian communities particularly hard. Opioid addiction and overdose in the U.S. is now so pervasive it claims the lives of more Americans every year than do car accidents.

For Adams, the issue is personal: His brother, Phillip, has struggled with substance abuse and is currently incarcerated for related charges. Adams detailed his brother’s story at the event in January. He also urged attendees to do their part to stop the deaths.

“I challenge you to think of one thing that you can do to help respond to the epidemic,” Adams said. “Because we’re not going to be able to solve this problem from Washington, D.C.”

At least some in the audience were listening. Whether or not lawmakers on Capitol Hill are making progress, researchers and educators in Longwood—home to Harvard Medical School and the Harvard School of Public Health—have decided to take matters into their own hands.

As the opioid epidemic rages, Harvard researchers and educators are working to better understand the phenomenon and to teach students how to fight against it. Harvard faculty across the University’s Longwood campus are ramping up efforts to research the epidemic and are offering more classes on how to treat patients affected by addiction.

‘Half of Americans Don't Know’

Harvard affiliates say University research into the opioid epidemic takes multiple forms, stretching from analyzing the driving forces behind the spike in deaths and overdoses to determining how to best treat addicted patients.

The factors behind the dramatic rise in opioid overdoses in recent years remain unclear, but Harvard professors with expertise in the field say they have identified some likely candidates.

Zirui Song, assistant professor of healthcare policy at the Medical School, has published at least two studies about opioids. His research leads him to believe possible causes of the epidemic include “availability of opioids, the delivery system, and factors associated with prescribing,” he wrote in an email.

But efforts to understand the epidemic are not circumscribed to the lab. The Medical School’s relationship with teaching hospitals allows Harvard professors to bring together research and practice, according to Laura G. Kehoe, an assistant professor at the Medical School and a physician at Massachusetts General Hospital.

Kehoe runs the Bridge Clinic at MGH, an on-demand clinic for at-risk patients.

She said many traditional substance-abuse treatment programs are “very regimented and really inaccessible to patients.” At her clinic, she has been working to develop a more flexible treatment model that takes into account each patient’s individual needs.

This model has significantly reduced the number of patients who do not show up to appointments, according to Kehoe. She said the system promises to help reduce opioid overdose and widespread drug usage.

Even as treatments improve, though, Harvard researchers say two things still bar the path to a comprehensive approach to the epidemic: lack of knowledge and public stigma surrounding addiction.

Robert Blendon, a professor at the School of Public Health, has extensively researched popular views of the opioid epidemic. Blendon directs the Harvard Opinion Research Program, an initiative that examines public opinion on health and social policy in the U.S. as well as nearly 30 other countries.

Blendon calls public ignorance “a central finding” that is “incredibly important” to the work of everyone at the Medical School and the School of Public Health.

“Half of Americans don’t know if there’s a treatment that even works, and half of them don’t think insurance should pay for it,” he said.

Kehoe agreed, adding that shame can also prevent those suffering from addiction from seeking treatment. She said this stigma can come from the general public, from healthcare providers, from family members, and even from the patients themselves.

“One of the biggest challenges is stigma,” Kehoe said.

Medical faculty have teamed up to teach two online classes about opioid and substance abuse. One of them, “The Opioid Crisis in America,” appears on the edX platform, a virtual education initiative Harvard and MIT founded in 2012. A team of six Harvard faculty members are offering the second, titled “Understanding Addiction,” through the Medical School’s Global Academy and in conjunction with the National Institute on Drug Abuse. Both courses debuted last year.

David H. Roberts, dean for external education at the Medical School, wrote in an emailed statement that Harvard faculty “recognized the opportunity to provide information and resources to patients, families and clinicians.”

According to Roberts, nearly 15,000 students have enrolled in “The Opioid Crisis in America” on HarvardX to date. The course is designed to enable students to select the modules that best address their needs.

The University has also brought several high-profile speakers to campus to discuss the opioid epidemic with students and faculty. Last month, Adams spoke at the School of Public Health in an event that formed part of the school’s Voices in Leadership program In Oct. 2017, Massachusetts Governor Charlie D. Baker ’79 spoke to students at the Medical School as part of a faculty panel.

Harvard’s efforts are not confined to its Longwood Campus. Blendon said he also has taught students and policymakers at the Kennedy School about public opinion surrounding the opioid epidemic.

After graduation, students can study the practical treatment of opioid addiction as they fulfill their residency requirements. Song wrote he has often used residency as an opportunity for “clinical teaching around opioid use and withdrawal.”

Kehoe said these offerings form a departure from the traditional medical school curriculum. She said typical class schedules did not give students the opportunity to learn about addiction and substance abuse disorder.

“I had to seek out my own education through mentors because there was no formal training then,” she said of her time in medical school and during residency.

Still, the Medical School has not mandated opioid education classes for its students. And HMS was not one of the 61 medical schools that signed a March 2016 White House pledge to include prescriber education in their curriculums.

Kehoe said working to address issues surrounding the opioid epidemic—and addiction more broadly—can sometimes be challenging and frustrating. But she said she always finds a reason to keep coming back to her clinic.

“The reason why this work is so rewarding and the reason why those of us who do this love it is that we see people get better every day, and this is a very treatable illness,” she said.