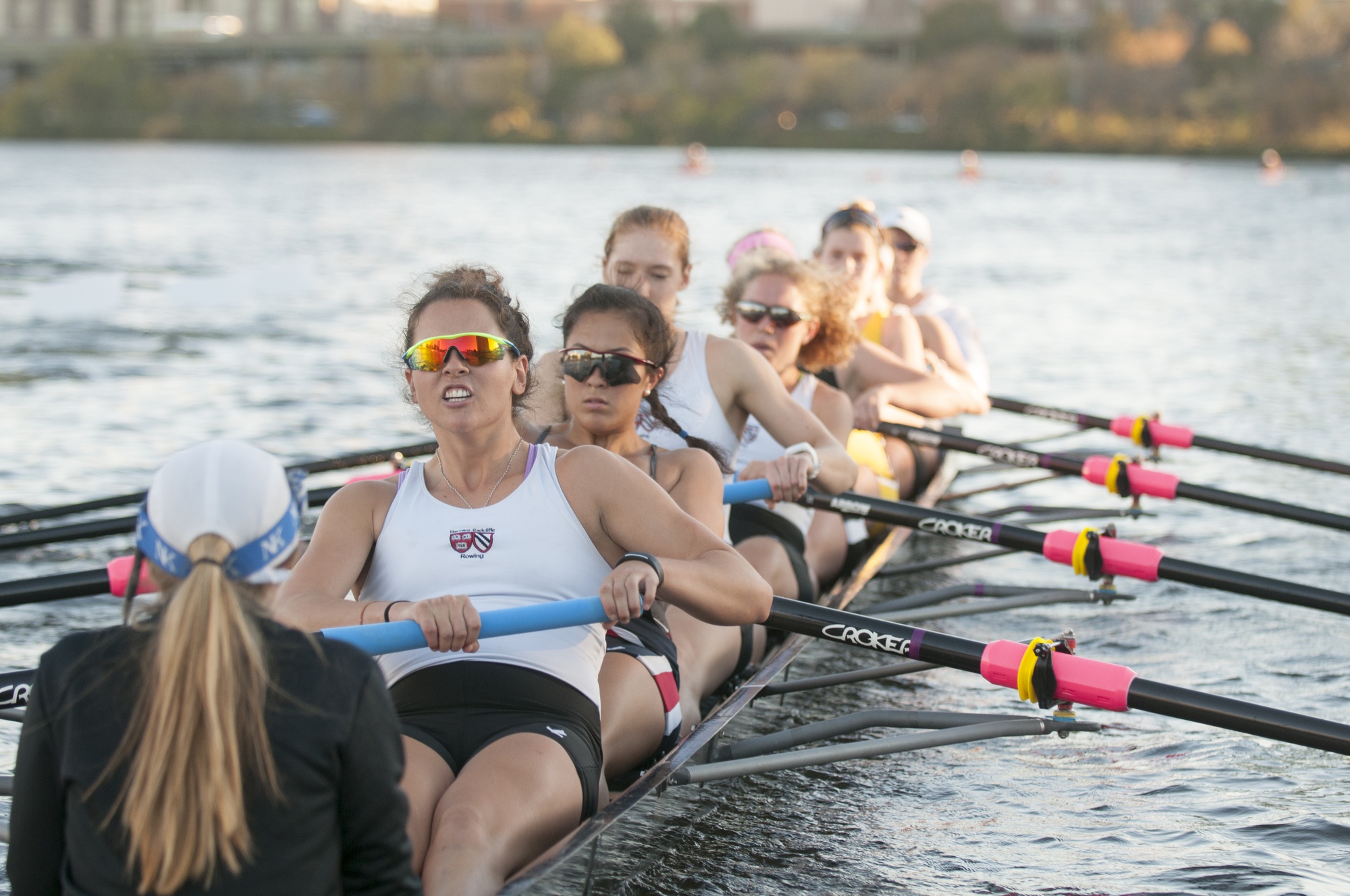 In the 10 races, the Harvard-Radcliffe heavyweight crew defeated Michigan State in four but dropped all five to Ohio State. By Mark Kelsey
By Leon K. Yang, Crimson Staff Writer

On the water for the first time this season, the Harvard-Radcliffe heavyweight crew dug its oars into the expanse of the Cooper River in Camden, N.J., facing chilly conditions while racing against two tough Big 10 opponents in Michigan State and Ohio State to open up the spring dual season.

In the end, the Black and White claimed four of the five races against the Green and White while conceding all five races to the Buckeyes.

After a strenuous winter training and an early spring regimen, Harvard-Radcliffe entered the race and 2,000-meter spring season fresh off a spring break training trip to Florida. The team traveled to its competition on Thursday—a day earlier than last year—according to sophomore coxswain Katherine Paglione.

“That was to give us a full day Friday to have two practices of the water, to be a little more settled coming into the Saturday races,” Paglione said. “I think the six hour bus ride is something that people have to work around in terms of their stiffness, people could stretch in their rooms or stretch in this designated room.”

The Black and White lined up against Michigan State in the morning and Ohio State in the afternoon, a two race sequence that Paglione said is important to acclimate the team to important races later in the season.

“The whole set-up of racing twice a day is also really good practice for us because as the season progresses and those final championship regattas, those are often two races in a day,” Paglione said. “We were really happy to have the opportunity to rehearse that and see how people feel with that. I think we were happy about how we did against those two teams.”

Harvard-Radcliffe opened the season with a convincing victory over the Green and White in the varsity eight, crossing the finish five seconds faster than its Michigan State counterpart in 6:43.1. The victory marks a reversal from last season, where the group lost. Junior Erica Holmes, the fifth seat of the eight, said that the team’s fast early start gave them a lead that they would ultimately maintain.

“I think that first 200 meters of racing for the whole season to be up three feet definitely gave us a huge confidence boost, and it enabled us to relax for the rest of the race and really find a good rhythm and keep our lead,” Holmes said. “It was actually much colder than people expected, so in the last 500 meters, most of us lost feelings in our hands, which was a case of hanging on right until the end literally.”

The second varsity eight followed up with an even larger margin of victory, beating Michigan State by thirteen seconds in 6:52.8. Paglione, the coxswain for the second eight, said that the boat’s energy originated from a strong performance from stroke seat freshman Caroline Noble.

“It wasn’t a technically perfect race, but we were at least moving together, and I think another thing that the boat did really well in that race was to continue to move,” Paglione said. “We were pretty much a length up the first 20 strokes, so we probably could have sat comfortably there and still won by a length, but the boat did a really good job of continuing even where there wasn’t that side-by-side competition pushing them.”

The Black and White took the varsity four and varsity four B races from the Spartans, but lost the third varsity eight. Harvard Radcliffe also lost all five races to the Buckeyes in the afternoon by at least 10 seconds.

Moving forward, Paglione said that the team derives its competitive drive from within itself, which will prepare it for an exciting season on the water this spring.

“I think the whole idea of your teammate being your toughest competitor is something that we strove for last year but are starting to really attain this year,” Paglione said. “If we know that the toughest person we’re going to come across is on our team everyday in practice, we feel pretty much prepared for any opponent on the water, That attitude has really carried us, and I think it’s going to continue to carry us. I think it’s just exciting to race.”