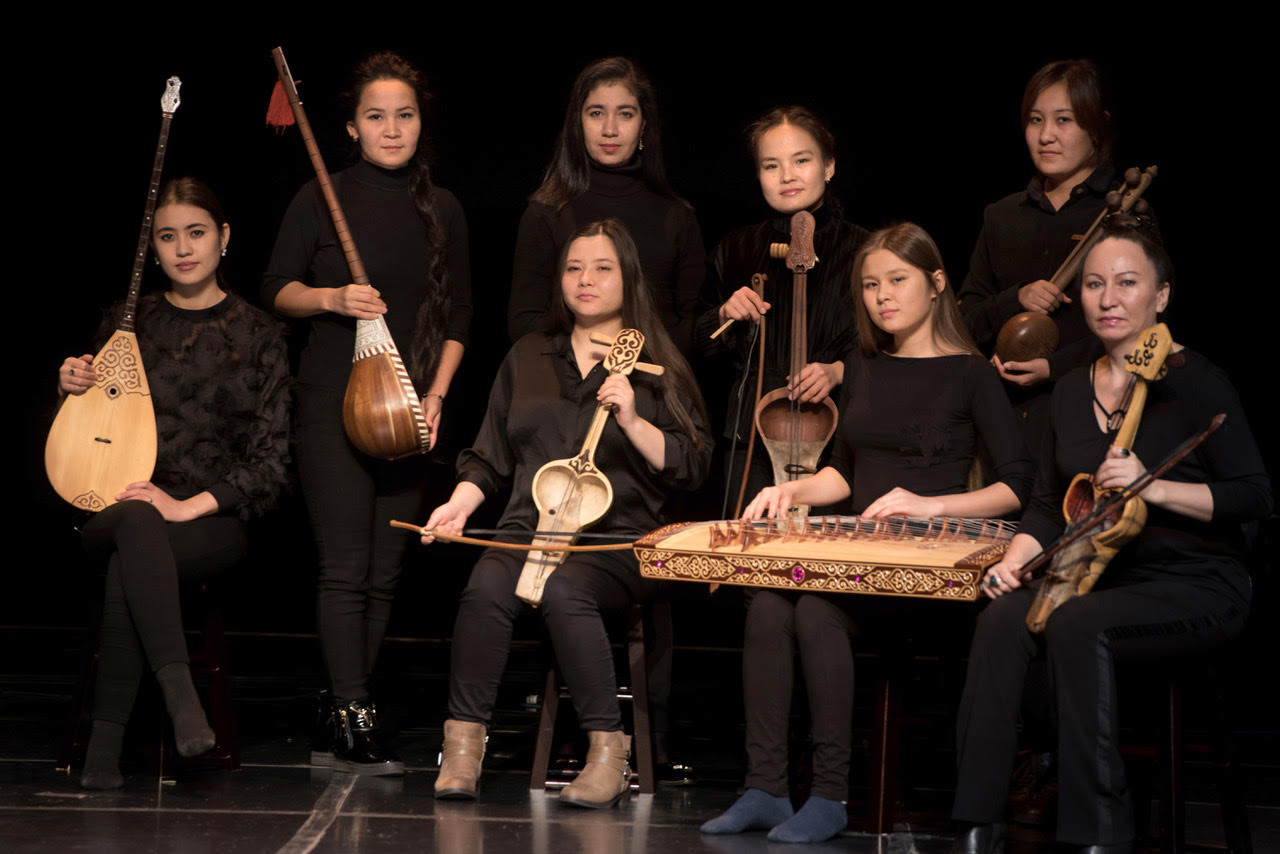 Hailing from the windswept steppes of Central Asia, eight cast members of the multimedia production of “Qyrq Qyz” (Forty Girls), an ancient epic about a nomadic band of Turkic women warriors, brought their music to Harvard’s Paine Hall on March 6. They played with a wide array of traditional instruments from Central Asian nomadic life, including a two-stringed instrument called a “qobyz” and a “jygach ooz komuz,” a wooden plate held at the lips with strings attached to it that create a unique bouncing sound. The women sang in plaintive wails evoking the distant horizons of an arid desert, accompanied by hand drums that beat like the hoofbeats of the horses which the Forty Girls rode so skillfully in the legends. Warm and mesmerizing, their voices and the unfamiliar rhythms played on the instruments transport the audience to an entirely different landscape: terribly open, beautiful, and lonely.

Directed by Saodat Ismailova, a filmmaker from Uzbekistan, the music was certainly cinematic in scale. The original production featured film scenes that depicted Gulaim, the teenage leader of the Forty Girls, who defended her land from Eastern invaders in the legend, along with gorgeous shots of the steppes. The epic of the female warrior is known throughout Central Asia in its myriad variations in the oral traditions of the region, and it is often compared to the stories of the Amazons in Greek mythology. It is a remnant of ancient matriarchal societies of Central Asia, and though the stories have faded, their mark still remains in those cultures today.

The eight women sat in a semi-circle on the Paine Hall stage and took turns singing and playing their instruments, concluding the performance with a final collaboration. Some of the musicians displayed exceptional virtuosity—Makhabat Kobogonova, who sang and played four different instruments, played the “komuz” with distinct flairs of hand movements fluttering in four directions across the strings at breakneck pace. Raushan Urazbayeva, the lead musician, performed a beautiful solo performance on the qobyz. The musicians seemed just as heroic as the women they were singing of in their almost martial skillfulness and poise with their instruments, while the singers sang in strong, open cries that seemed to sweep across vast plains. They often broke into grand recitative-like passages of speak-singing, and although it was in a foreign language, it was impossible not to feel the depth of emotion in their voices, and to deduce the heroic content.

The program notes also provided translations of the lyrics of some of the songs, offering a window into their poetic depth. One verse reads: “When Gulayim opened her eyes, / Moonless darkness was transformed into dawn. / Gulayim was like a hundred-colored wreath, / And if the sun’s flames were to fade, / The light from her moonlike face / Would fill the farthest reaches of the universe.”

It was a breath of fresh air to hear the music of women of a non-Western culture. The eight Central Asian women on stage struck a contrast with the names of the composers that lined the top of Paine Hall, all male and from the European tradition, including names like Beethoven, Schubert, Mozart. According to Ismailova, despite Central Asia’s tradition of epics featuring powerful women, music-making has always been traditionally a man’s role, and it has only been since the middle of the last century that women have been beginning to learn how to play. Deeply moving and gorgeous, the concert seemed to brim over with pride and appreciation for the woman’s spiritual experience.

—Staff Writer Faith A. Pak can be reached at faith.pak@thecrimson.com