A Production That Does G&S 'Yeoman’s Service' 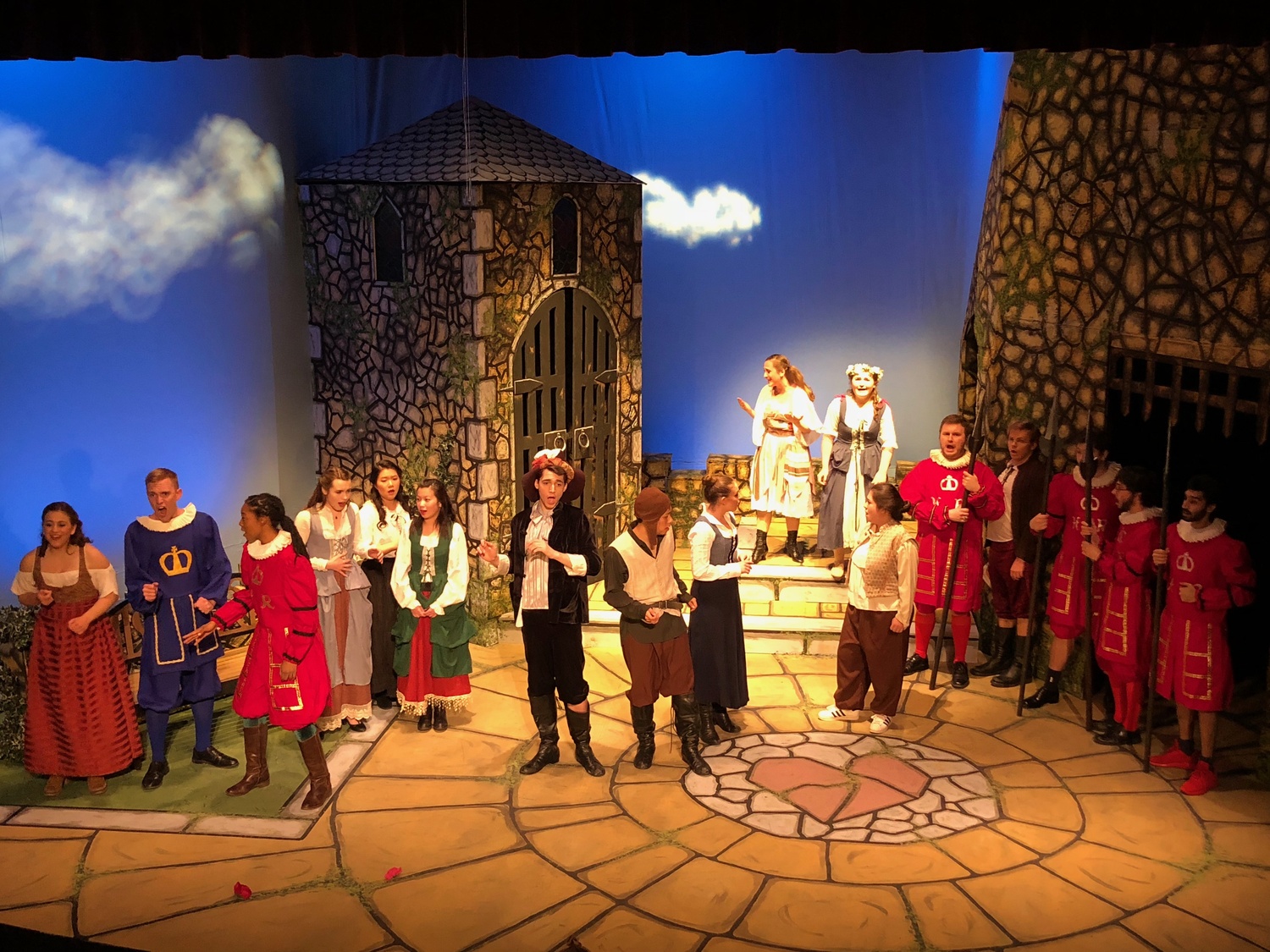 A scene from Yeomen By Courtesy of Harvard-Radcliffe Gilbert and Sullivan Players
By Melissa C. Rodman, Crimson Staff Writer

“Fresh” is not likely to be the first word that comes to mind when describing 16th-century England, with its economic and gendered divisions and its looming Tower of London prison. Yet the Harvard-Radcliffe Gilbert and Sullivan Players’ current staging of “The Yeomen of the Guard; or The Merryman and His Maid,” indeed set in Tudor England, feels—in a word—fresh. Honeyed, airy vocal performances challenge the Tower’s assumed doom and gloom, and modern, cross-gendered casting takes place without diegetic fanfare. Elaborate costumes, thoughtful lighting, and a beautiful set knit the show together elegantly. Running from March 23 to April 1 in the Agassiz Theater, the production delights, despite some lagging Act II moments that typify librettist W.S. Gilbert and composer Arthur Sullivan’s long denouements.

In knotty, plot-heavy G&S fashion, “Yeomen” tracks multiple storylines. Against the Tower of London backdrop, the young Phoebe Meryll (Arianna N. Paz ’19) sets her sight on Colonel Fairfax (typically a male role, but played here by Janiah Lockett ’20), a reportedly plucky soldier who has been wrongfully convicted for sorcery and is set to die within one hour of the show’s opening curtain. Phoebe and her father, Sergeant Meryll (Mike Shirek ’20), hatch a plan to disguise Fairfax as Phoebe’s brother, Leonard (also typically a male role, but played here by Sunny Levine ’20), and sneak Fairfax away before the executioner arrives. Fairfax, with the help of the easily swayed Tower Lieutenant (Benjamin D. Grimm ’18), plots to marry any willing woman, so that his soon-to-be-distributed estate will not fall into the hands of his nefarious cousin, who imprisoned Fairfax in the first place. Meanwhile, traveling entertainers Elsie Maynard (Julianne Freeman) and Jacklyn Point (typically the male role “Jack Point,” but played here by Rebecca Thau ’19) arrive at the Tower, and Elsie becomes Fairfax’s untimely bride. Escape, a faked murder, a marriage, and irreparable heartbreak ensue. “It never seems to go right for them, and for one character especially,” stage director Nermin Hasanovic ’20 summarizes in his program note.

The cast’s stellar singing carries the production. Having dazzled in shows including HRG&SP’s “Pirates of Penzance” last semester and “Into the Woods” at the OBERON last year, Paz once again flaunts her vocal chops, this time bringing a softness and flirtatiousness to Phoebe’s mezzo voice part. Pining for Fairfax, she paces across the stage, grazing her hand against the Tower’s flagstones and briefly drawing it to her forehead in calculated maidenly anguish. “An idle breath — / Yet life and death / May hang upon a maid's ‘Heigh-ho!’” she sings, eyes downcast and slightly come-hither, as she twiddles the coarse wool and spinning needle in her hands. Lockett, as the fated Fairfax, tackles the role with such clear diction and an incredibly lush take on the songs that the character’s traditional male gender becomes irrelevant to the performance. In particular, her voice shines in Fairfax’s entrance number, “Is Life a Boon?”; she delivers each lyric deeply, crisply, and compellingly. Freeman’s soprano rounds out the strong, articulated vocal performances.

Musical moments that feature several characters likewise invigorate the show. An a capella number in Act II (“Strange Adventure”)—which is soft and contemplative but manages to buoy the waning act—exemplifies this production’s blend of thematic gravitas, vocal harmony, and intricate staging. Singing about Elsie’s untimely marriage to Fairfax, Tower of London overseer Dame Carruthers (Rachel Share-Sapolsky ’21), her niece Kate (Bo Choi ’17), Sergeant Meryll, and Fairfax himself proceed in a square formation. They trace a path that evokes the moving hands of a clock, also echoed by the song’s ticking, repeated words. The singers’ chilling, virtually unaccompanied harmonizing elevates the song’s commentary on Elsie’s harsh reality, from unexpected wife to unexpected widow, all as a teenager no less: “Modest maiden will not tarry; / Though but sixteen year she carry, / She must marry, she must marry, / Though the altar be a tomb — / Tower — Tower — Tower tomb!” The blocking of this number not only emphasizes the operetta’s weightier themes, but also is fresh and smart.

When Elsie and Jacklyn perform for the villagers (“I have a song to sing, O!”), they too breathe new life into the music. The “O”s that frame their duet flow fluidly between Elsie and Jacklyn, establishing their own patter of communication. Each “O” is joyous and lovingly delivered between the performance partners, a lyrical choice that makes the reprise of this number, which cements the break in their relationship, all the more poignant.

All of this nuanced singing and staging takes place with the actors cloaked in striking costumes and performing on an impressive flagstone set, featuring two Tower buildings and a cracked pink mosaic heart. During “I have a song to sing, O!,” Elsie wears a flower crown and an off-white dress with dark pink overlays and immaculate lace detailing. Jacklyn’s understated (and not overtly jester-ly) costumes—two dresses with light-colored patchworking and billowy sleeves—match well with the style and color scheme of Elsie’s costume, visually unifying the pair’s performance. Notably, the eponymous Yeomen ensemble members wear striking scarlet tunics, trimmed with gold and embroidered with the Tudor crown and H.R. monogram (“Henry Rex,” or King Henry). Kudos to the production’s creative team for their attention to detail, which keeps the eye engaged and entertained throughout a lengthy show. Yeoman’s service, indeed.