The Faculty of Arts and Sciences has filed a Title IX complaint against Government Professor Jorge I. Dominguez, according to an email FAS Dean Michael D. Smith sent Tuesday to 15 women who are accusing the professor of sexual harassment.

Smith’s email came as a private response to a letter the 15 women sent last Thursday. In their letter, the women—comprising former Harvard undergraduates, graduate students, professors, and staff—called on the University to implement several steps they claim are necessary to ensure a “full and fair” review of the allegations against Dominguez.

The women also outlined several criticisms of the Title IX office, which deals with the federal policy—Title IX—that prohibits sex or gender-based discrimination including sexual harassment. Smith wrote in his reply email that he could not comment on the women's criticisms because there is an ongoing complaint against the professor.

“Since the FAS has submitted a formal Title IX complaint involving Jorge Dominguez, it is improper for me to opine on the specific issues laid out in your letter while this complaint is open,” Smith wrote in the email, obtained by The Crimson.

In February and March, the Chronicle of Higher Education reported that at least 18 women are accusing Dominguez, the former vice provost for International Affairs, of repeated instances of sexual misconduct across the past three decades. 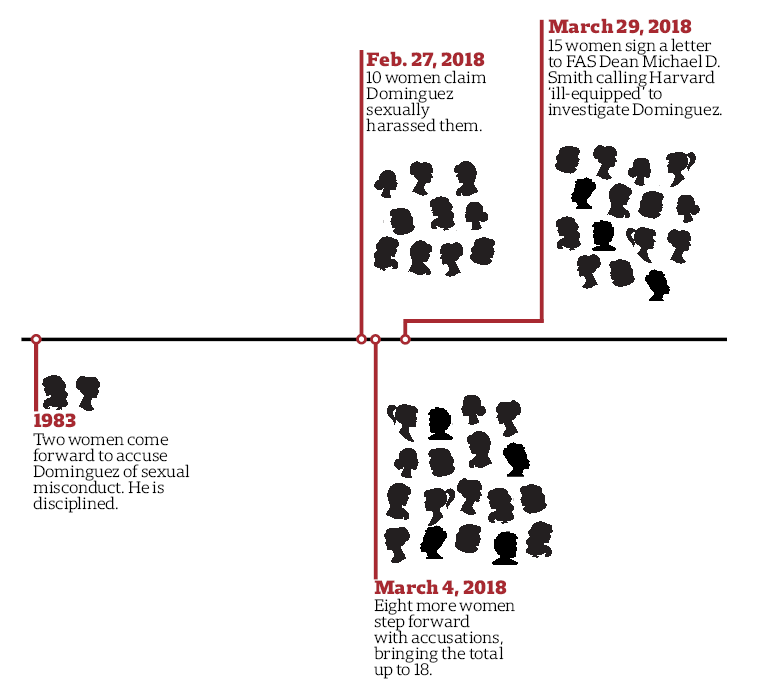 Though several women have been in touch with the Title IX office about Dominguez, Smith’s email forms the first confirmation from administrators that there is an official complaint against the professor.

Formal Title IX complaints in FAS are investigated according to the school’s sexual and gender-based harassment policies and procedures. Once a formal complaint is filed, the Office for Dispute Resolution is tasked with investigating the allegations.

Both individuals and the institution itself can file Title IX complaints. Nienke C. Grossman ’99, one of the 15 women who signed the Thursday letter to Smith, said staffers in the Title IX Office told her on March 26 that the office had prepared a complaint including a list of potential complainants or witnesses. She and Suzanna E. Challen, another alumnus who has made public allegations against Dominguez, first reached out to the Title IX Office about the professor in Nov. 2017.

“The Title IX Office offered for us to serve as witnesses to the Title IX complaint or to file our own complaints. They gave us the option of doing either,” Grossman wrote in an email last month.

Once ODR receives a formal complaint, it assigns an investigator to the case, who then performs an initial review. If the investigator decides there is sufficient grounds for further investigation, the respondent—the person against whom the allegations have been made—is contacted to submit a response to the accusations. The respondent can submit a list of witnesses; ODR will ultimately build an expanded witness list including individuals the complainant lists as well as others the investigator considers valuable to the investigation.

At the investigation’s conclusion, the investigator will create a report detailing recommendations for FAS to “eliminate any harassment, prevent its recurrence, and address its effects.”

“We share a commitment to a full and fair investigation of the allegations surrounding Jorge Dominguez,” Smith wrote in the email he sent to the women Thursday. “I continue to encourage anyone who may have witnessed or experienced sexual harassment, whether recently or in the past, to come forward and share their experiences.”

The women claimed in their letter last week that Harvard is “ill-equipped” to complete such an investigation due to a variety of factors including a lack of resources and a previous failure to recognize Dominguez’s decades of alleged harassment. The letter's signatories also called for an independent investigation into the circumstances surrounding Dominguez’s alleged history of sexual misconduct, claiming the University cannot be objective when investigating itself.

Smith’s emailed response did not address the topic of an independent investigation.

The women wrote last week they are addressing Smith because the University’s policies afford the FAS dean authority over the investigation of misconduct and discipline of professors, including granting himthe ability to modify the normal procedures “in cases involving grave misconduct.”

“As detailed in our procedures, the administration of discipline in cases against Faculty of Arts and Sciences (FAS) faculty is subject to the authority of the FAS Dean,” Smith wrote in his response Thursday.

“You should be hearing from the Provost’s Office directly,” Smith wrote.