At Harvard and Stanford, different school cultures and environments create differences in experiences, size of the engineering schools.
By Idil Tuysuzoglu 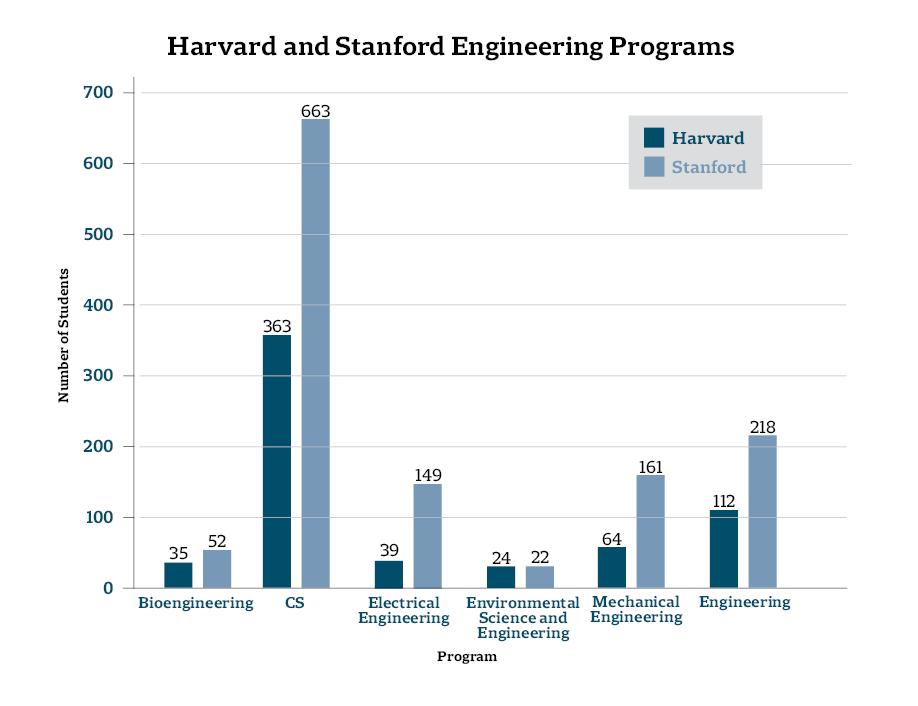 When School of Engineering and Applied Sciences Dean Frank J. Doyle III was asked how Harvard's engineering program stacks up against Stanford’s, he laughed.

The two universities, boasting widely different cultures and environments, are constantly juxtaposed. Every year, journalists and college consultants ritually seek out each school’s updated U.S. News and World Report ranking. The lucky few who earn acceptance to both institutions beleaguer popular forum websites like Quora and College Confidential with anxious posts as the May commitment date approaches.

Some, though, refuse to make the comparison at all. Both institutions’ computer science and engineering faculty decline to definitively rank their respective programs.

“I’m not a rah-rah kinda person; I’m happy to say what I think makes our program very good. I don’t want to get into comparisons with other institutions,” said Alex Aiken, chair of Stanford’s Computer Science Department.

“Well, I won't make a comparison to Stanford,” agreed Harry R. Lewis ’68, former dean of the College and a professor in Harvard’s Computer Science Department.

TO EACH THEIR OWN

As an institution, Harvard had a head start.

The Lawrence Scientific School, established to educate undergraduates in science and engineering, was founded in in 1847 courtesy of a $50,000 gift from its namesake, Abbott Lawrence. The school was arguably unappreciated in its time; former University President Charles W. Eliot, Class of 1853, comparing the idea of an undergraduate scientific school to “the story of an ugly duckling” in an 1869 Atlantic article.

Fifty-nine more years would pass before Harvard added engineering to the college’s curriculum via the 1906 merger of the Lawrence School and the College.

Stanford offered engineering from its inception in 1891. Out of the 15 members of Stanford’s inaugural faculty, five were engineering professors, according to Stanford’s engineering website. In the university’s first class, engineering enrollees made up 141 out of a total of 559 undergraduate students.

Stanford sits in the heart of the Silicon Valley, surrounded by tech giants including Apple, located in neighboring Cupertino, and both Facebook and Google, located in nearby Menlo Park and Mountain View, respectively. Common lore dictates that Stanford’s rise closely paralleled Silicon Valley’s own ascent to national and industrial prominence.

“There’s been a lot of back and forth with the industry and the people in the area for a very long time,” he said. “That’s actually a big part of the success of the place, is that informal and both formal help that we get from local industry.”

The faculty, too, has deep ties to the Silicon Valley. Stanford’s former president John L. Hennessy, who is often referred to as “godfather of the Silicon Valley,” currently serves as board chairman for Alphabet, Inc., Google’s parent firm, and dozens of his colleagues have played instrumental roles in developing foundational internet technologies.

The University's engineering program, by contrast, has long been wedded to something entirely different—Harvard’s liberal arts tradition.

“I think we need to be cognizant that we really have a fundamentally different kind of program from many of those places. And... the hallmarks that differentiate us, I would argue, are first, our embedding in a liberal arts foundation,” Doyle said. “You know, when we became a school ten years ago, we did not divorce away and create a separate undergraduate body.”

According to Christopher M. Madl ’12, a former engineering sciences concentrator and current postdoctoral fellow at Stanford, the opportunity to pursue broad interests comprised a highlight of his experience studying engineering at Harvard.

“I think those are some of the courses I most enjoyed as a Harvard undergrad, beyond the sciences courses were some of these humanities courses I took, and I think that is certainly a strength that could be matched at some place like Stanford that is a very broad university,” Madl said.

Since its 2007 restructuring, SEAS has nonetheless pushed for the kind of industry ties and start-up culture prominent at peer engineering schools like Stanford's. In 2011, the University established the glass-encased Innovation Lab to help facilitate the entrepreneurial visions of its students and faculty.

In a recent interview, Doyle identified increasing connections with the private sector as a top priority during his tenure and noted he recently hired a staffer to manage the school’s corporate outreach.

A QUESTION OF SCALE

Harvard trails Stanford in terms of total concentrators and faculty members in the engineering school by a significant margin. When comparing similar concentrations—Harvard parlance for major—between the schools, there is only one concentration in which Harvard's enrollees slightly outnumber Stanford's: Environmental Science and Engineering.

A larger faculty, according to Aiken, leads to a broader teaching capability, especially in computer science.

“The thing about Stanford is that we’re a big enough department to cover the whole spectrum,” Aiken said.

Rapid growth, though, also presents challenges for faculty-student advising. Stanford’s Computer Science program, for instance, has over 663 degree candidates and 122 affiliated faculty, resulting in a faculty to student ratio that is higher than Stanford’s average 4:1 ratio.

“It’s a real challenge, the growth in the number of students has outstripped our traditional advising mechanisms, there’s no question about that,” Aiken said. “This is actually something we are currently working on, we’re currently revising our advising structure and thinking about how to improve it, you know, for the future.”

Some affiliated with SEAS, on the other hand, see the school's nimble size as an advantage. While computer science is the second most popular concentration at Harvard, it boasts half as many undergraduates as Stanford’s program. Enrollment for the remaining SEAS concentrations, with the exception of Applied Mathematics, is limited to double digits.

“If you look at the course catalog, at some our engineering courses, two-thirds of them have a hands-on component," Doyle said. "I would challenge folks looking at our peers or our competitors to find a place that, in our sort of research standing, in our sort of superlative academic archives here, that offers that kind of intimate hands on opportunity."

"It’s hard to do at a big scale, it really is hard to do,” Doyle said.

“I think students tend not to get lost or isolated intellectually here at SEAS,” Lewis added.

Faculty at both institutions said they anticipate room for growth.

“I haven’t noticed any systemic flaws that I have goals of correcting at some point in the near future. I’m sure they’ll come up as I continue to familiarize myself,” said Eric A. Appel, a material sciences and engineering assistant professor at Stanford.

Aiken pointed out, though, that they would be cautious about introducing any sudden changes to the university’s already well-established programs.

“One thing, it’s difficult to fiddle with pieces of the culture of a place and say I’m gonna improve this aspect or change this one little thing, they kinda come as packages, and so that’s what makes it hard to say, well, just because we like this one aspect of another place, that adopting that might mean a lot of other changes that we wouldn’t like,” Aiken said. “I think it’s good that there’s a lot of variation in the ways places are set up and that they emphasize different things, that doesn’t mean that we necessarily want to be like other places.”

SEAS, according to Doyle, will seek to emulate its peers’ strengths as it readies for an ambitious expansion.

“Look, we don’t want to have our head under a basket and ignore any pioneering or innovative or technological advances that others happen to beat us to,” Doyle said. “Or if they see it first, we need to learn from that.”