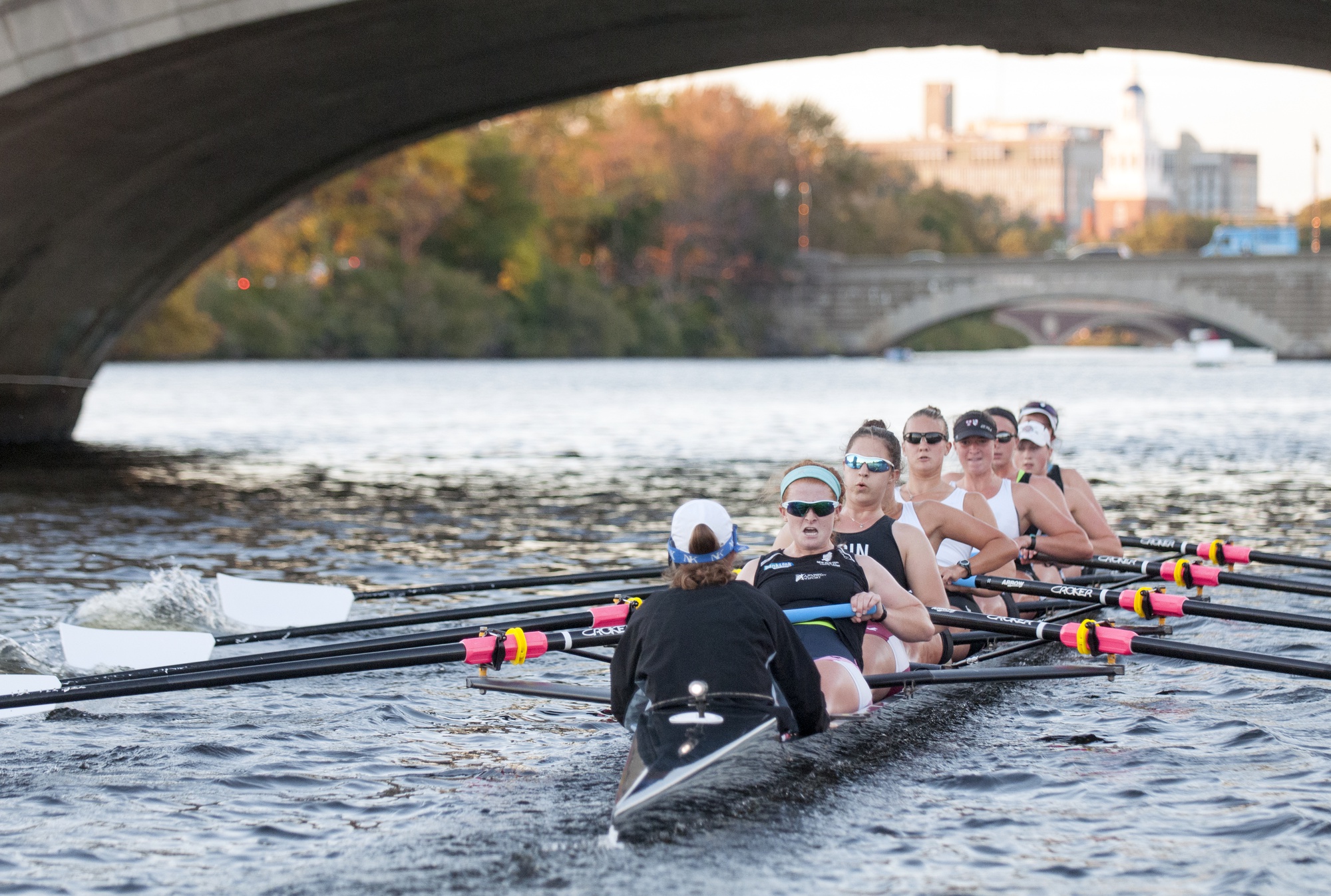 The women’s heavyweight crew bested the field this weekend at Eastern Springs, rebounding from a loss to Yale last week. By Mark Kelsey
By Leon K. Yang, Crimson Staff Writer

In an athletic display of prowess that can only be analogized to the dynasties of the Chicago Bulls in the 90’s and the New England Patriots of the 21st century, the No. 17 ranked Black and White captured the Eastern Sprints Championship for the fourth year in a row.

After a loss to No. 5 Yale last weekend in which the team had different lineups for the 1V and 2V boats, Radcliffe responded strongly against the rest of the field on Lake Quinsigamond in Worcester, Mass.

“We had a bit of a switched up lineup and changed our people around between the 1V and the 2V, so this week we really tried to just keep them the same and work with our new lineups,” said women’s heavyweight co-captain Sofia Donnecke. “I think that really helped both boats a lot in the race.”

After a morning race in which the first varsity eight, stroked by sophomore Grace Eysenbach and coxed by sophomore Katherine Paglione, won its heat by four seconds in 6:33.506. The team managed an even stronger performance in the afternoon with a 6:27.709 finish, almost four seconds ahead of second place Dartmouth.

“We did have a slower time than two other boats we were facing in the final, so we were pretty nervous, but in the end, we had a pretty good first 1000, but we were in second place,” Donnecke said. “Then around the 1000, we had a really good rhythm and in the third 500, we rowed right through Dartmouth, and it was actually pretty exciting. Then we finished ahead of them with open water. It was a very fun race.”

The second varsity eight and fourth varsity eight for the Black and White also both placed first in their respective grand finals, with times of 6:45.710 and 7:24.982, respectively.

The No. 6 Radcliffe heavyweight crew also traveled to Lake Quinsigamond for Eastern Sprints. The Black and White took fifth in the first varsity eight in 7:08.386, finishing 15 seconds behind No. 2 Boston University, the winners of the event.

Radcliffe’s best finish occurred in the third varsity eight, in which the team finished third in 7:50.397, edging out No. 4 Princeton, which finished in 7:50.945.

In Derby, Conn., the previously undefeated No. 1 Harvard men’s lightweight crew conceded its first losses of the season at the Goldthwait and Vogel Cups against Ancient Eight rivals No. 4 Yale and No. 5 Princeton.

In the first varsity eight, Princeton pulled ahead in 5:42.70 and Yale finished a second behind in 5:43.90, while the Crimson trailed five seconds behind in 5:48.97. Harvard would not take a race over the weekend except in the fifth varsity eight, which is won by over 20 seconds over Princeton.

Riding high on back-to-back victorious weekends, the Harvard men’s heavyweight crew entered its matchup against No. 6 Northeastern looking to end its dual race season on a strong note. The team took to the Charles River to battle against its neighbor.

“First of all, it’s a dual of the Charles, and we’ve got two home teams racing on the basin, and there’s a lot of pride in that,” senior Cole Durbin said. “Northeastern is a strong program, and we prepare hard for this race and I think that certainly some weight in it being the final race. We have a few seniors in the boat, myself included, for whom it was their last race. I grew up in high school coxing on the Charles, so it was my last race after 10 years racing on that river, so it was an important race for a lot of us, but I think we were happy with how it went and how we prepared for it. It was a good one.”

With a methodical patience and unwavering grit that can only be compared to the colonists during the Battle of Saratoga of the Revolutionary War or to the cool composure of Michael Jordan as he drained a jump shot over Bryon Russell to win the 1998 Finals for the Bulls, the heavyweight A boat, stroked by junior Arthur Doyle and coxed by Durbin, relied on a last second surge to pull away from the Huskies to capture the Smith by less than half a second in 6:06.800. Northeastern’s boat finished in 6:07.229.

“We were very strong out of the start and took an early lead in the race,” Durbin said. “Northeastern, to their credit, had a very strong middle of the race and fought back and didn’t let us go. It took a good sprint in the last 200 meters or so to get our bow in front, so it was certainly a hard fought race. It was close racing. Those are the most exciting races, the most fun in some respects.”

“There’s a lot of excitement moving into the championship season,” Durbin said. “We look forward to these races all season. The dual races are great and they are sort of one animal and the championships season is a whole different animal in terms of getting the lineups six boats across, and there’s a little bit more on the line. We’re looking forward to that. The whole team is really starting to dial in right now in terms of that goal and it’s really sort of crunch time right now in terms of both wrapping up the semester and also really starting to focus on these races that really matter the most for us.”