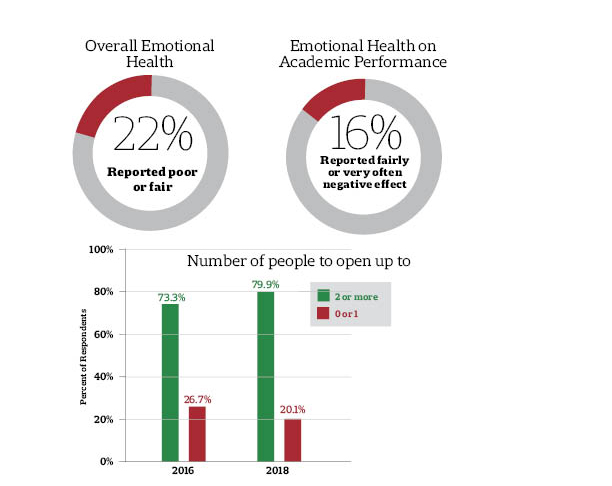 More than one in seven surveyed undergraduates reported their emotional health has had a negative effect on their academic performance in a recent wellness survey conducted by Harvard University Health Services in partnership with the Undergraduate Council.

The questions in the survey were designed to paint a picture of the emotional well-being of the student body and their awareness of support mechanisms in place to address mental health concerns.

However, close to 45 percent of respondents indicated they have concerns about whether they suffer from an undiagnosed mental health condition.

“Such concerns may be indicative of students’ need for more clarification and understanding of clinical vs. non-clinical mental health issues,” the report reads.

The survey, which is conducted biannually, was designed in part by the Undergraduate Council. The Council passed legislation in early February to conduct a separate survey on mental health, but ultimately agreed to join forces with HUHS in order to gain more “comprehensive” data, according to UC President Catherine L. Zhang ’19.

HUHS Executive Director Paul J. Barreira cautioned in an emailed statement that the results may not reflect the opinions of the undergraduate population as a whole, due to the relatively low response rate.

“With a 35.8% response rate to this voluntary survey, the respondents are likely not representative of the entire student body, as those with strong feelings may be most inclined to respond,” Barreira wrote. “Therefore, we must be cautious in interpreting the data.”

The survey results were weighted to correct for an imbalanced response rate between respondents of different genders, according to Karen Pearce, Director of the Harvard College Institutional Research Office and a co-author of the survey.

“However, the data is helpful in identifying trends and engaging in conversations with the entire College community about ways that we can improve emotional and physical wellbeing of students,” Barreira added.

The survey also found that large percentages of students do not know the location of peer counseling offices on campus.

While slightly over 50 percent reported they knew the location of Room 13, an all-night student-run counseling group located in the basement of Thayer Hall, less than 20 percent knew where the offices of ECHO, Contact, Response, or Indigo were located.

UC Vice President Vice President Nicholas D. Boucher ’19 said in an interview Tuesday that the lack of awareness among students about the whereabouts of peer counseling groups reflects a need to increase assistance for these groups and help to publicize their existence.

“That speaks to the fact that we need to be supporting our peer counseling groups even more than we are currently,” Boucher said. “Peer counseling groups offer a tremendously valuable resource to Harvard’s campus in the sense that they are a resource and a set of people that a lot of students turn to when they are going through difficult times.”

“It is apparent to me that something is not working well with our communication right now,” Boucher added. “And when I say our communication, referring to Harvard’s strategy broadly for advertising peer counselling groups.”

A spokesperson for HUHS could not be reached for comment Thursday afternoon.

Boucher said he would seek to use the Council’s reach to better advertise the availability of peer counseling groups to undergraduates.

This year’s results showed improvements in some areas relative to the 2016 iteration of the survey.

The proportion of undergraduates who reported they knew at least two people they could “open up to” about private feelings increased to 79.9 percent from 73.3 percent in 2016.

In the wake of the survey, HUHS will seek to form a student advisory committee to discuss potential policy responses to the survey results, according to Zhang.

“HUHS is pretty committed to making sure that there is student input as we continue to design surveys and as we continue to take the results of this survey and put them towards actionable policy changes,” Zhang said.