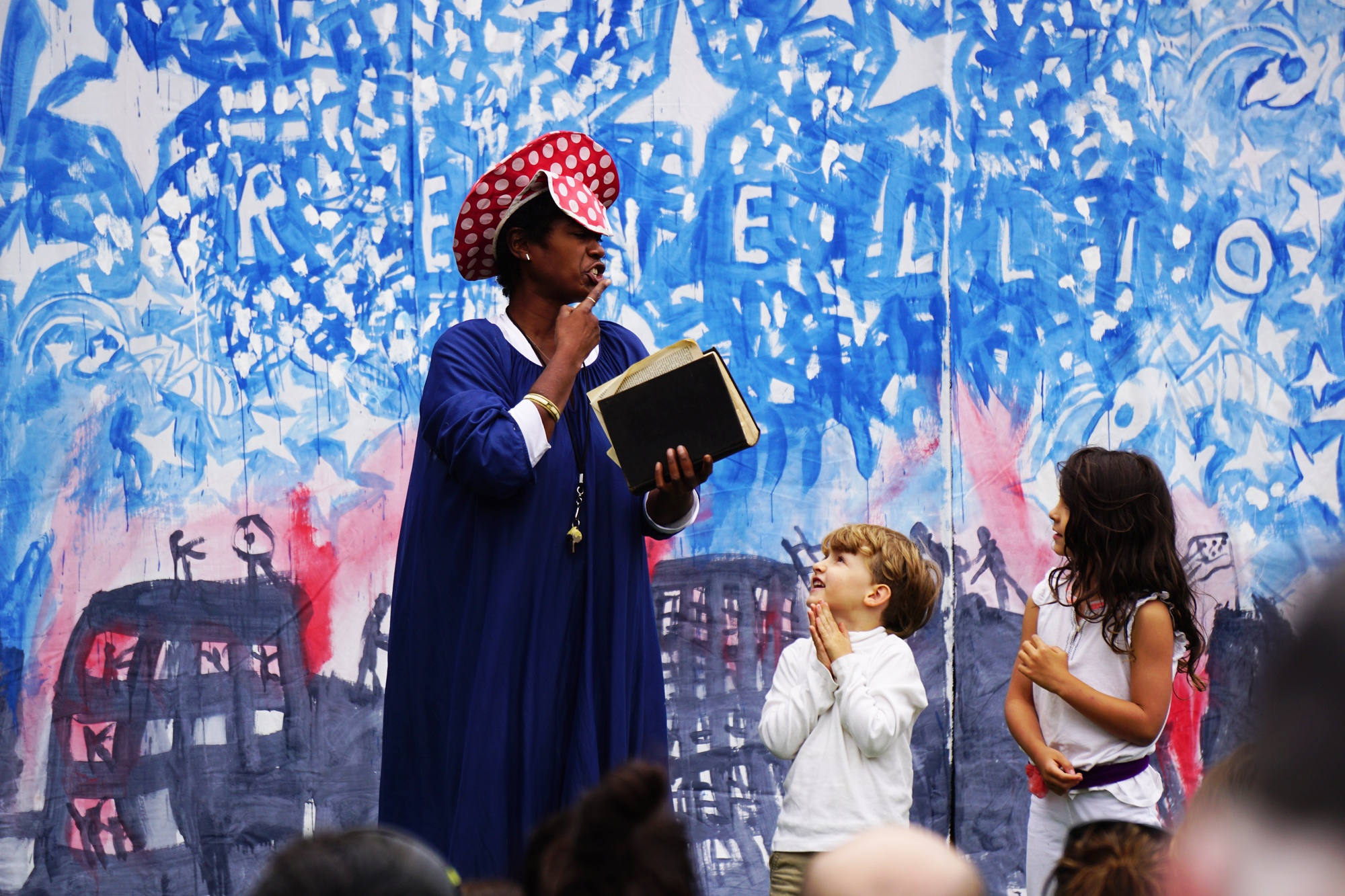 During one of the first scenes of the Grasshopper Rebellion Circus, a teacher flips through her Oxford English Dictionary and picks "riot" as the word of the day. By Jacqueline S. Chea
Advertisement
Advertisement

The 'Hippies with Dolls' Take Cambridge

The show begins with a rendition of the 1386 Battle of Sempach, in which puppeteers in large papier-mâché masks defeat armored cavalry (other puppeteers wearing stilts and papier-mâché horses) with pitchforks and hay rakes. I become concerned for the welfare of the fictional horses.
By Anna Kate E. Cannon

I arrive at Cambridge Common on the afternoon of Sept. 8, lured by the promise of “celastic tigers,” “celestial grasshoppers,” and a celebration of “6,000 years of human revolution against human management.”

The band is rehearsing when I arrive; I’m greeted by the cacophony of a saxophone, a sousaphone, two trombones, two percussionists, and a woman wearing a corrugated washboard on her chest. Everyone in the troupe wears all-white clothing, though there are variations in head and footwear. The saxophone player is wearing a straw boater hat, while the woman with the washboard wears a bandana and a snazzy pair of sunglasses.

The troupe is making their second stop on a cross country tour that will last until December. They travel in a caravan of vans, RVs, and a retrofitted, paint-covered school bus stuffed to the brim with puppets. The bus serves as a vehicle for the circus backdrop, five sheets of cloth painted in dizzying white and blue patterns. If you look closely, you can make out the show’s title — Grasshopper Rebellion Circus.

Bread and Puppet Theater was founded in 1963 by Peter Schumann, a sculptor, dancer, and baker who emigrated from Germany to New York’s Lower East Side. While teaching a class on puppetry at the Putney School in Vermont, Schumann decided to take a puppet show on the road in a trailer pulled by a station wagon. After each show, he served the playgoers bread from his bakery. So the name Bread and Puppet stuck.

The theater is famous for its radical countercultural stance. According to Bread and Puppet’s website, it was a part of “some of the earliest demonstrations against U.S. Involvement in Southeast Asia” and was a “familiar presence in the protest movement against the Vietnam War.” The Grasshopper Rebellion Circus is no different: it is anti-capitalist, anti-globalist, and pro-antagonization-of-the-mind. It draws attention to the Chilean feminist movement, the plight of women workers in India, prison strikers, and countless other focal points in today’s political climate.

Bread and Puppet also maintains a museum in a 150-year-old barn in Vermont’s Northeast Kingdom. Opened in 1974, the museum houses puppets arranged to recreate scenes from shows past. Unlike most museums, none of the puppets are preserved in any way; they will decay with the passage of time, and since they’re made of string, papier-mâché, staples, and secondhand clothing, that time might be sooner than later.

Bread and Puppet prides itself on being one of the oldest self-supporting theaters in the country — primarily by surviving on their thrift. They scour rummage sales for costumes, reuse when they can, and rely on community efforts to create most of their puppets. Their guiding philosophy is Cheap Art — a rebellion against the art that only takes place in galleries and is inaccessible to people who can’t pay the entrance fee. The actors are volunteers — the troupe generates income from donations and profits from the Cheap Art Store (a folding table set up at each performance), which sells postcards, posters, pamphlets on the philosophy of Cheap Art, and so forth.
In addition to giving performances, the theater also runs apprenticeship programs in rural Vermont, via which people stay for a number of weeks to learn and perform. Participants live in tents, use outhouses, and compost food leftovers. The theater’s website calls for “truck drivers, farmers, musicians, students, grandmothers, activists, lovers of papier-mâché tigers.”

Troupe members range from people like Ron Kelley, who has been playing the saxophone for the Bread and Puppet Band for 42 years, to children who look to be as young as four or five. One of the first acts in today’s Grasshopper Rebellion Circus is a schoolteacher deciding on the word of the day, followed by a gaggle of children. A girl in a white dress waves enthusiastically to someone in the front row. The teacher pulls out her Oxford English Dictionary and decides that today, the word of the day will be RIOT. The kids take this to heart and the stage descends into rapid chaos, pages of the Oxford English Dictionary raining down.

Portions of the show are defined by sardonic comedy about the current political climate. Nine Supreme Court Justices swagger onto the stage before ripping off their robes to reveal tutus and Superman-esque letters on their chests, spelling F-A-S-C-I-S-T. They launch themselves into an exuberant cheerleading routine, shouting, “We went from Supreme to Supremacist!” After the justices retire, two inventors appear with a machine called the Not-So-Evil-A-Tron, declaring it a “washing machine for language” that turns “pure evil” into “palatable banality.” They begin to feed words into one side, and on the other side, a different one appears.
“Torture” becomes “enhanced interrogation.” “Old fashioned racism” becomes “zero tolerance immigration policy.” “Hippies with dolls” becomes “Bread and Puppet Theater.”

Later, ICE officials forcibly stop two puppets from hugging. A massive puppet that represents Yemen holds a papier-mâché baby in its arms, and falls to the ground while the U.S. government, Saudi Arabia, the media, and the U.S. public ignore its cries for help. There is a moment of recognition for the soldiers “who ruined their lives by following orders to kill 107 and maim 11,000 inmates of the Gaza prison and therefore will never be able to look into a human eye again.”

At times like these, the crowd falls silent. I hear parents tell their children they will explain things to them later. I hear people murmur about the government, about the climate, about the way things have to change.

As I stand in line for a piece of bread (sourdough rye, as per tradition), I think about how the ground I’m standing on was muddied by the thousands of people who attended the Women’s March last January. Cambridge Common has seen its share of protests, and it saw another today. A protest against uncaring politics, against turning a blind eye, against poverty and war and corruption. A protest against inaccessible art and the constraints of capitalism, against corruption and greed. This protest is bound up in sheet paper and staples, in community efforts and the hands of puppeteers who would rather be here than anywhere else.