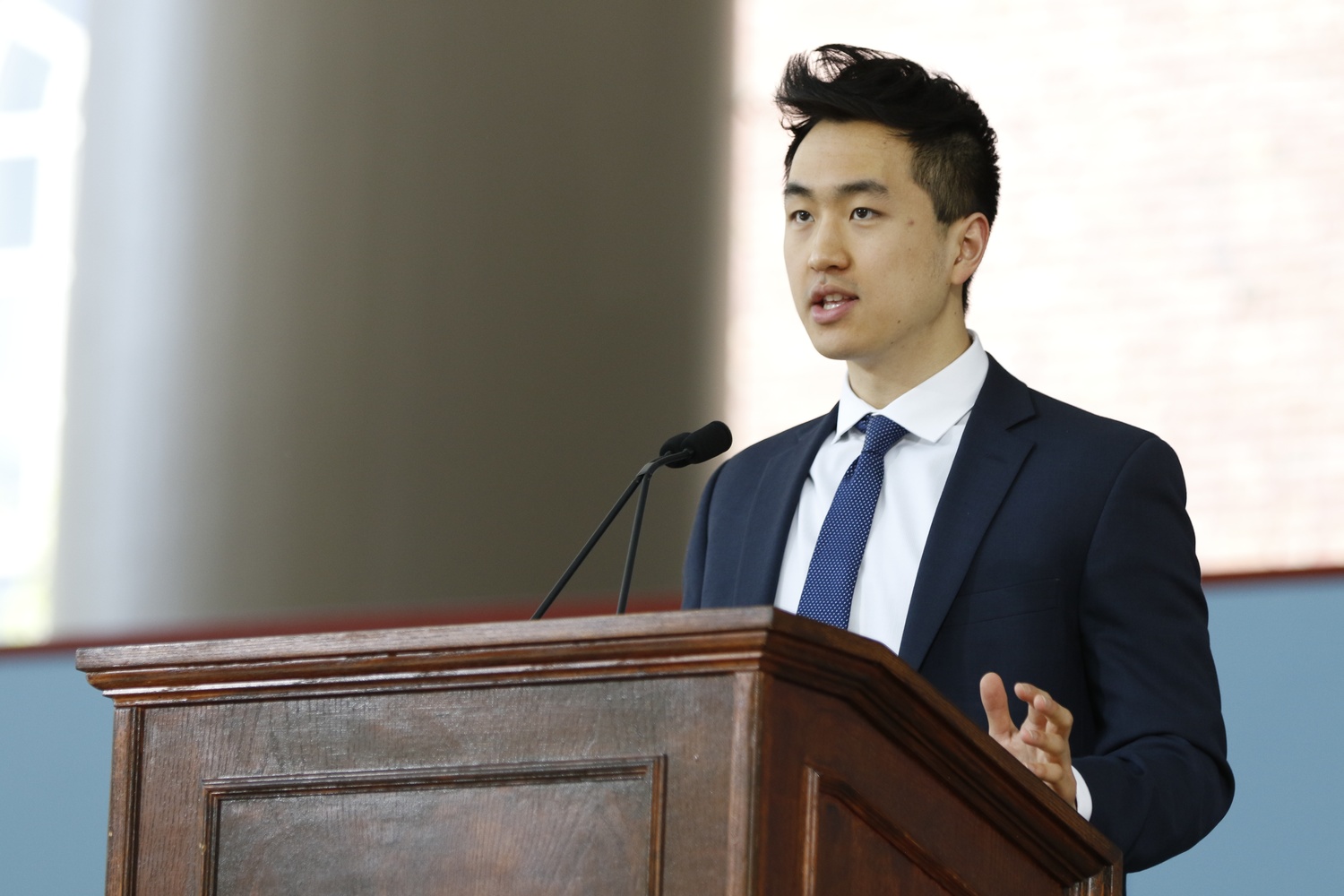 Rhodes Scholar Jin K. Park ’18-19 will embark for England this fall — but he may not be able to return.

Due to his immigration status, Park — the first ever Deferred Action for Childhood Arrivals beneficiary to win the Rhodes Scholarship — could be denied reentry into the United States if he leaves to pursue a master's at Oxford. The risk has left Park undeterred, however, and he said he plans to accept the scholarship.

“People keep asking me, ‘Aren’t you afraid?’ I’m afraid of the fact that nothing seems to be in my control but when I think about that, if you’re undocumented in America, nothing’s ever in your control. So you kind of just go through life,” Park said.

DACA is an Obama-era initiative that allows undocumented youth to legally live and work in the U.S. Recipients of DACA are nicknamed “Dreamers” after the DREAM Act, which would have created a pathway to legal status for undocumented minors but was never passed by Congress. President Trump sought to repeal DACA in September 2017, but his efforts were blocked by federal judges in California, New York, and Washington D.C. who ordered federal injunctions maintaining the program.

The Obama administration had previously allowed “Dreamers” to travel abroad under limited circumstances, such as academic study, via a provision called “advance parole.” U.S. Citizenship and Immigration Services, however, stopped accepting and approving advance parole requests from DACA recipients on Sept. 5, 2017. As the current administration seeks a Supreme Court review of the federal judges’ rulings, it warns DACA recipients that going abroad without previously granted advance parole approval “automatically terminates your deferred action under DACA.”

“Essentially what’s happening is if you’re undocumented, if you overstayed a visa like I did, and if you leave, you can’t come back,” said Park, who is in contact with legal counsel to better understand his case’s legal intricacies.

USCIS did not respond to a request for comment.

Park was aware of these risks when he first applied for the scholarship in 2017. Despite being ineligible for the Rhodes due to his “Dreamer” status, Park applied with the support of Harvard's Office of Undergraduate Research and Fellowships.

“Institutions have the latitude to endorse whomever they choose,” URAF Director Gregory A. Llacer wrote in an emailed statement. “I had known Jin before he applied the first time, and I simply told him when he asked me that we would support his application even though technically he was ineligible (although DACA was not a defined eligibility/ineligibility class for Rhodes back then).”

Park said he never expected to win but only hoped he could spark dialogue about eventually allowing undocumented students to apply for the scholarship. Though he was ultimately not chosen, his application prompted the Rhodes Trust to consider opening the scholarship to DACA recipients.

Park said he plans to accept the scholarship, in part because “a perpetual inability to plan long term is kind of something that is just ingrained in how I choose my opportunities.” He will pursue master's degrees in Global Health Science and Epidemiology as well as Migration Studies in order to learn how to improve health policy for immigrants.

“We tell this joke where, DACA recipients, we have to plan our lives in two year increments because two years is how often you have to renew DACA,” Park said.

Regarding the uncertainty that Park now faces, Llacer said that URAF will “always support Jin philosophically,” but “in practice, URAF now is on the periphery.”

Babette Tegldal, the director of communications of the Rhodes Trust, wrote in an emailed statement that the Trust will not comment directly on Jin’s situation but supports his case and hopes that it will work out.

Now, Park is working with Define American, a media nonprofit dedicated to shifting the conversation surrounding immigrants, to discuss his options. Executive Director Ryan M. Eller said he is committed to “utilizing some of our partners, including legal partners both at Harvard and with other organizations to advise [Park].”

“I keep telling him that it’s a horribly unfortunate decision that he has to make because in a world where most of us have the privilege of just being able to travel anywhere, for some reason, we have put people like Jin in a box and restricted his ability to continue his education,” Eller said.

Even if the U.S. government chooses not to allow Park to return to the States, Eller said that Park, who serves as a Define American chapter leader, has the organization’s backing.

“We’re going to work with him to try to figure it out, and make sure that at least he knows that even if our government doesn’t recognize him as an American, we have a whole community of millions of folks strong who absolutely not only believe that he is an American, but that he represents the best of what we can be,” Eller said.

Park said that many others have reassured him that because he’s a Rhodes Scholar “you can take your talents anywhere, and every country should be taking you.” But he rejects the notion that an immigrant has to be a Rhodes Scholar to be afforded “basic human decency.” When arguing for undocumented immigrants’ rights to reside in the U.S., Park said he avoids citing their “moral deservingness, talents, economic productivity.”

He said he wants to be allowed to return to the U.S. not because he’s “talented” but because it’s his home. He added that it is his unwavering sense of “home” — which Park defines as Queens, N.Y., where he grew up — that keeps him grounded.

“I know where I belong. If I have to spend the rest of my life trying to convince this country to let me back in then that’s what I’m going to do,” he said. “Humans make roots in ways that are defined by more than just how many kids you have here or whether or not you were born here. Home is really to what extent a human being is embedded within the network of social practices in a given society.”

Park said his parents share his worries, but they also share his conviction in his place in the U.S. He said winning the scholarship is a way to repay the sacrifices that they made for him and a way to continue his service to the immigrant community.