At Harvard’s Science Center Plaza, Concert for One Brings Music to the Masses 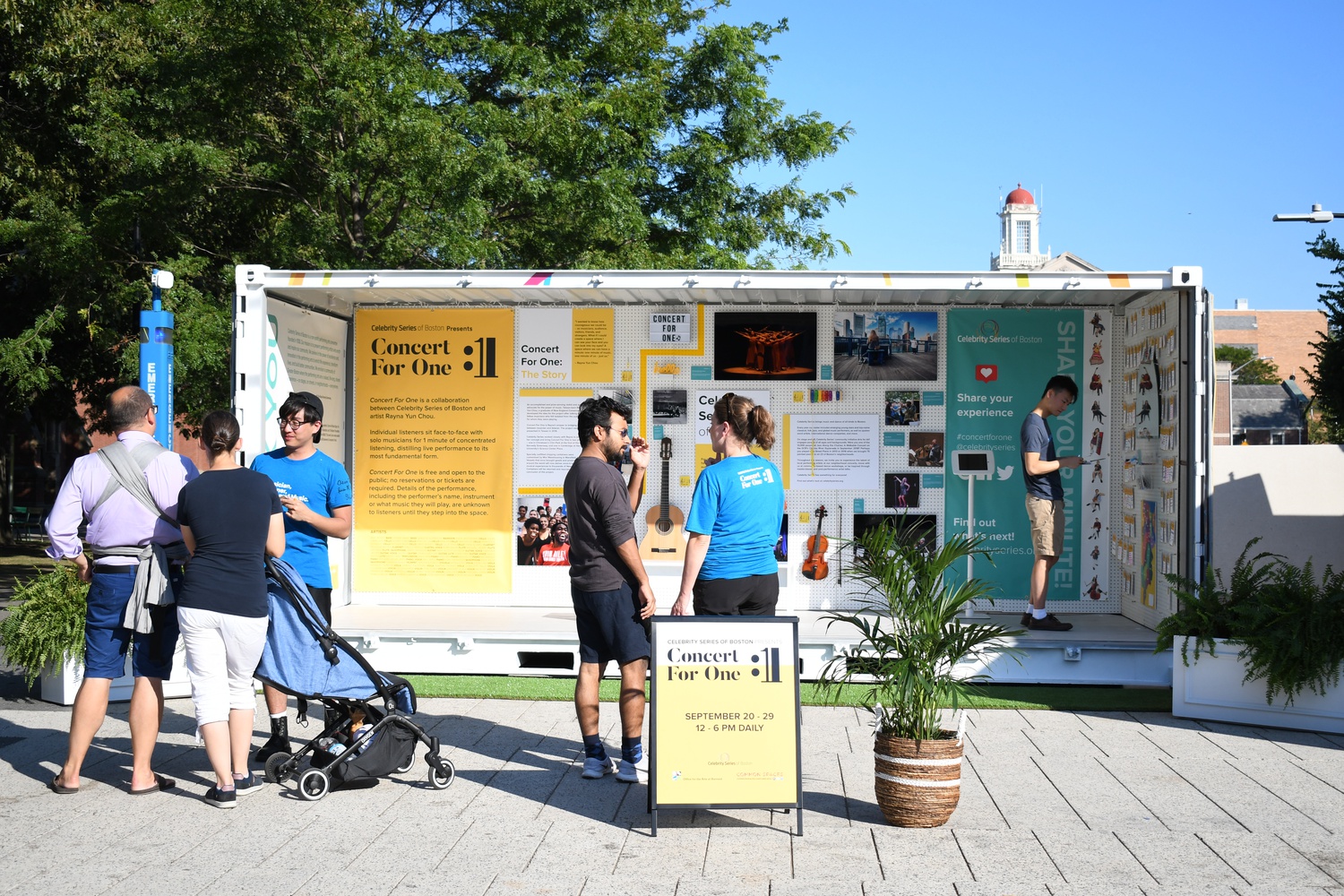 Last week, a bright yellow shipping container set up shop alongside the food trucks of the Science Center Plaza. But instead of holding cargo, the structure served as a miniature performance venue with just enough space for two chairs and an instrument. Inside, solo musicians performed one minute of music for individual listeners as part of the Boston Celebrity Series’ Concert for One project.

Violist and New England Conservatory graduate Rayna Yun Chou conceived the idea of a one-on-one concert to combat the perceived isolation and inaccessibility of classical music. After the project succeeded in Taiwan, she worked with the Boston Celebrity Series to develop Concert for One. During its 10-day run, the public concert series offered free performances to passersby in Boston and Cambridge.

Half an hour after performances began on Friday, Sept. 27, a line had formed outside the makeshift concert hall. In another shipping container, guests could read about Concert for One’s history and deliver their own performances on instruments mounted on the walls, including a guitar and xylophone. Staff members dressed in blue provided colorful markers and encouraged listeners to leave feedback on notecards.

Ali, who works in the Office of Academic Integrity and Student Conduct of Harvard College and has studied classical voice, listened to several artists at Concert for One earlier in the week.

“I’m just a huge fan of all kinds of music,” Ali said. “This is my fifth time checking it out. It’s just a minute, and I’ve heard five different instruments.”

Ali also commented on how the performance space fostered a connection between musicians and listeners. “Going into that space — it feels like you’re entering someone’s living room,” he said. “You have this person who is playing just for you. It’s really powerful.”

For Cong, a third-year Ph.D. candidate in the Physics department, the opportunity to attend a performance was a welcome break from her coursework. “It’s been a stressful week, so I was like, ‘It’s the perfect way to take a break,’” she said.

Lee’s choice of repertoire carried personal significance for both Ali and Cong. “When I was hearing the Beethoven, it makes you think of your associations with it. I remember hearing in a conference about Beethoven’s life and his struggles,” Ali said.

Cong, a classical pianist, noted that artists can develop completely different interpretations of the same piece. “Because I also play piano, I’ve played Beethoven sonatas — not this particular one, but I really enjoy watching other people interpret these sonatas because everyone interprets it in their own way,” she said.

Later that afternoon, lutenist Jonas Kublickas treated listeners to a medley of Renaissance music and improvisation. Born in Lithuania, Kublickas began his musical career as a classical guitarist and studied at Mozarteum University in Salzburg before he discovered the lute at age 19. After completing his undergraduate studies, he moved to the United States and obtained his master’s degree from New England Conservatory in 2016. Kublickas also teaches both privately and for local organizations, including the EKS Music School in Quincy.

“I decided that I wanted to explore the U.S. a little bit, so my teacher invited me to come here to do my master’s at the conservatory. And then when I graduated, I really liked this area, so I just decided to stay,” he said.

A twist of fate brought Kublickas and his lute to the Science Center Plaza on Friday. “It was by accident that I saw the application,” he said. “I was about to board a plane, and I saw this, and I was like, ‘I have to submit.’ But I only had two hours, so I barely filled out the application.”

For one hour, Kublickas performed excerpts by composers John Dowland and Johannes Kapsberger. “It’s just one of the best pieces, personally, that I think Dowland wrote, so I decided it was a great representation of Renaissance lute,” he said of Dowland’s composition, “Flow, my tears.” “I also did some improvisations on Renaissance chord progressions.”

Listeners’ enthusiasm for Kublickas’s music came as a pleasant surprise to him. “I didn’t really know what to expect because today was my first day,” he said. “Mostly non-musicians, which is great. It shows that people are interested. I’m very happy about that. One person said that I made their day. It feels great that you can impact someone’s life — or a day — in 60 seconds.”

Although enthusiastic about Concert for One’s potential, Kublickas expressed concern about classical music’s future. “It is a dying art,” he said. “It’s a big problem. But I don’t really know the cure yet.”

In the meantime, though, Kublickas said he intends to do his part by sharing his music with the world.