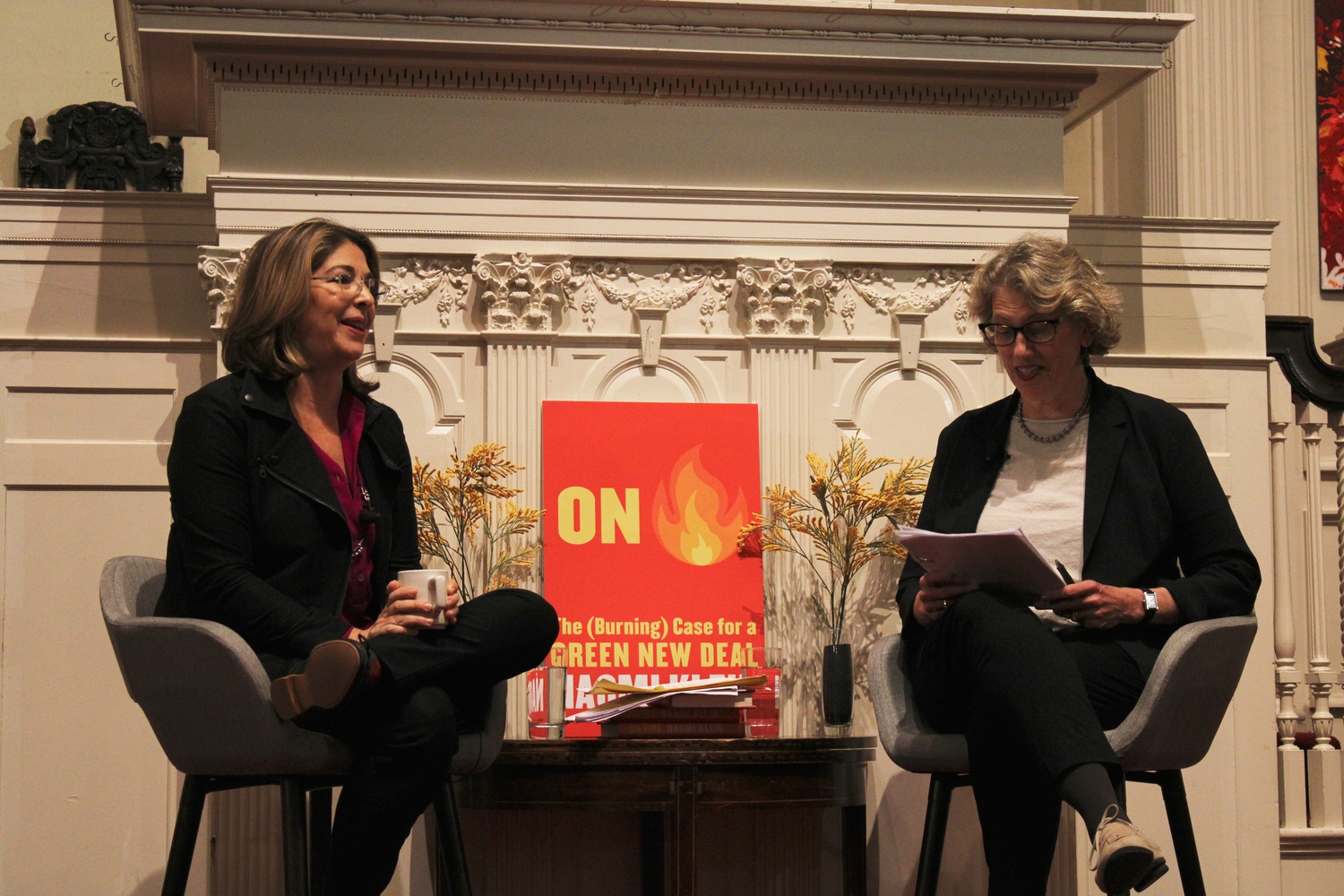 Journalist Naomi Klein called for immediate action on climate change and discussed her recently released book, “On Fire: The (Burning) Case for a Green New Deal,” at a sold-out event at First Parish Church in Harvard Square Thursday evening.

In a talk lasting more than an hour, Klein said it was necessary to declare an “all-out war on pollution and poverty and racism and colonialism and despair, all at the same time.”

Klein described the challenge of mitigating climate change as not only a natural fight, but a political fight.

“We have these very real fires of climate disruption, not just those literal fires but the droughts and the storms and on and on,” Klein said. “But we also have these political fires, these fires of hate that are also beginning to rage out of control, that are also jumping the flames from country to country.”

With regard to political threats to climate change efforts, Klein pointed to the rise of political demagogues and politicians who use natural resources for their own benefit.

“They’re tapping into that feeling of profound unease, building walls, waging war on their political opponents and the press, and this allows them to get to the real business at hand, which is plundering the last remaining wildernesses on this planet from the Amazon to the Arctic,” Klein explained.

Klein said the key to fighting climate change and the political forces driving it is in part intergenerational cooperation. She referenced the work of Greta Thunberg, a 16-year-old Swedish climate activist who began a worldwide school strike campaign a year ago and has since spoken before the United Nations about climate issues.

Klein said she sees Thunberg as leading a new generation that embodies another, more constructive source of fire: the “fire of our movements coming together at last.” That movement, Klein argued, is uniquely inclusive of climate justice, youth activism, indigenous rights, and fossil fuel divestment.

Fossil fuel divestment has gained increasing traction among Harvard students and faculty in recent years. Divest Harvard, the primary advocacy group on campus, has held rallies and conversations with administrators about the topic, but has repeatedly faced pushback from University President Lawrence S. Bacow. Bacow has argued that Harvard is best positioned to address climate change if it works with fossil fuel companies, rather than divesting its endowment from the industry.

“The most important things are to organize, and to vote, and I guess also to strike,” Mitra said. “Everybody here has a network of people that they know and that they can help become passionate about this issue, and if every single person in this room told 10 other people to get involved, we’d start a movement.”

“I’m also an organizer for the Boston Youth Climate Strike, and so I think that leaving work, disrupting business as usual and showing our politicians and our society that we want change and we want it now is a powerful way to make a statement,” she added.

Attendee Dauro Aquino of Reading, Mass. waited in line after the event for a book signing. He said he hoped to pass on the message of climate activism to his 11-year-old daughter.

“This is one of her fights,” he said. “I hope I can catch her attention on this, and I’m in line to dedicate this [book] to her.”