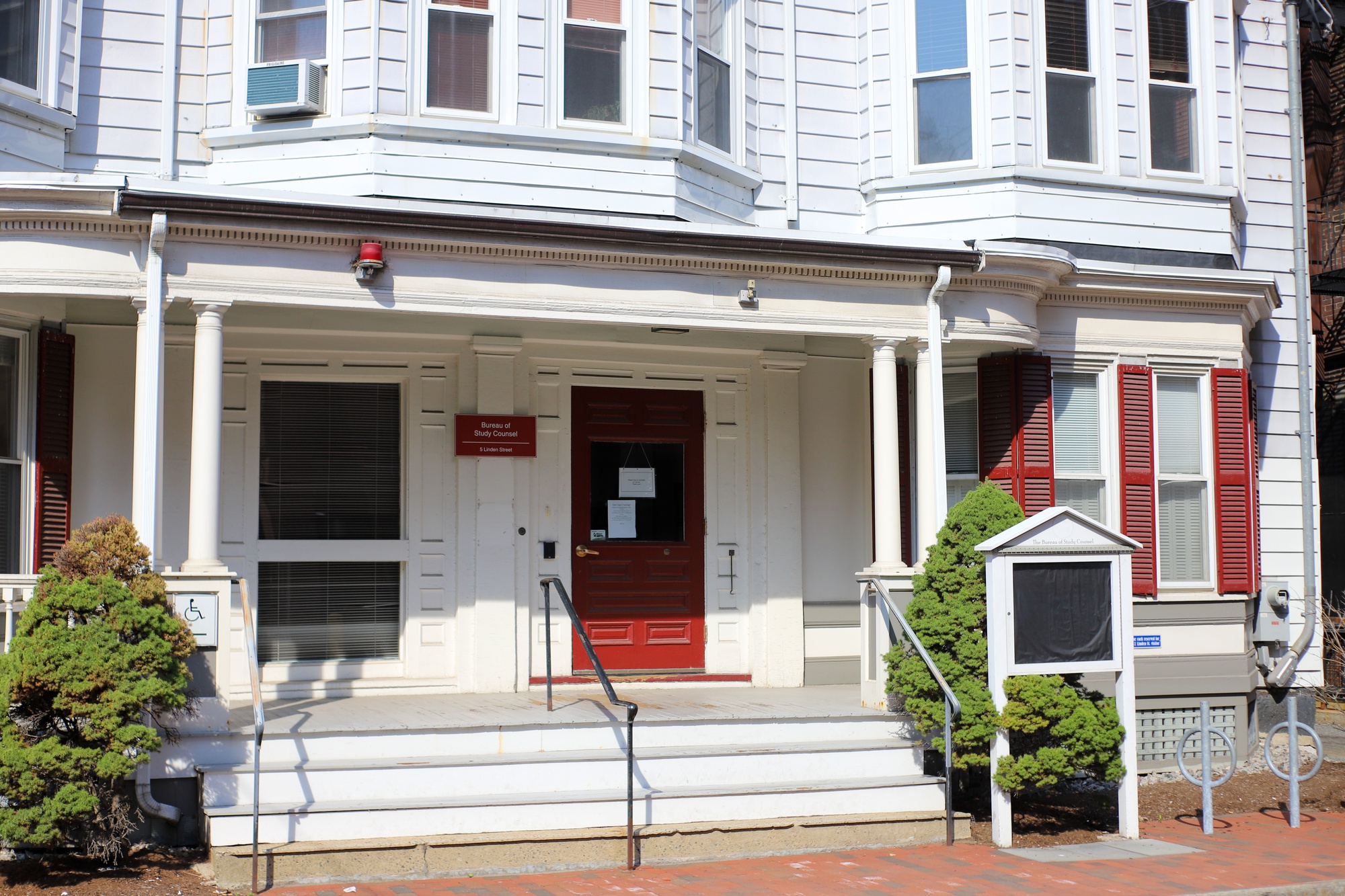 The Bureau of Study Counsel was founded in 1947, after an influx of World War II veterans, to support their academic and personal adjustments to college. By Ryan N. Gajarawala
Advertisement
Advertisement

The replacement of the Bureau of Study Council by the Academic Resource Center signals a shift away from the Bureau’s combined model of counseling for personal and educational concerns.
By Polina N. Whitehouse

Powder-blue paint clings to the wood siding and peels from the floorboards on the porch at 5 Linden St., where the Harvard College Bureau of Study Counsel is living out its final semester. The house maintains the homey atmosphere that had always been the goal of William G. Perry, Jr. ’35, the Bureau’s founding director. Next semester, the Bureau of Study Counsel will be replaced by the Academic Resource Center, which has already established itself in a new location — clean and modern in its design.

The change encompasses far more than just acronym and venue. Gone, for one thing, are the jobs of the BSC’s counselors. Former dean of the college and current professor Harry R. Lewis ’68, who spoke with a number of counselors, explained, “There's a Dec. 31 deadline for them to either leave, find another position within Harvard, or be laid off.”

Lewis later clarified in an email that while “layoff” may not be the most accurate term, the jobs will cease to exist. Aaron Goldman, a Harvard spokesperson, declined to comment on any personnel matters.

Many of these employees worked at the BSC for decades. BSC counselors hold doctorates, mostly in psychology, whereas the ARC’s job listings for “academic coaches” require an undergraduate degree and recommend a master’s.

The replacement of the Bureau of Study Council by the Academic Resource Center signals a shift away from the Bureau’s combined model of counseling for personal and educational concerns. This change marks the latest development in a history — dating back to the 1940s — of Harvard’s approach to the interaction between the academic and psychological issues that its students face.

The BSC was born out of an academic need: In 1939, Harvard created its ancestor, a Bureau of Supervisors, to provide coursework help to Harvard students, displacing the private tutoring schools that had generated an epidemic of academic dishonesty. Soon after, an influx of World War II veterans to Harvard’s campus presented an acute need for support during the students’ academic and personal adjustment to college. In 1947, under the leadership of William Perry, the Bureau of Supervisors rose to the task, absorbing Harvard’s supplementary reading and English Language courses and taking on a counseling role. The transformed organization was then rechristened the Bureau of Study Counsel.

According to Ann Fleck-Henderson, a BSC counselor who worked under its founding director, the Perry lore is abundant. His background was not in psychology, but in teaching humanities, which inspired his non-clinical approach to counseling. Fleck-Henderson recounts that when she arrived at the Bureau in 1971, Perry was “an amazingly skilled listener,” while being nearly deaf. With “hearing aids in both ears” and no lips to read, Fleck-Henderson recalls, Perry would take in the cadences of tape-recorded counseling sessions and respond with comments like, “‘I can't make out the words, but I can hear the music and you're not on the same wavelength with that kid.’”

Based on a belief that the connection between learning and personal development was not limited to veterans, Perry developed the Bureau’s signature model of one-on-one, non-directive counseling. Rather than give advice, counselors would use open-ended conversation to guide students towards new understandings of their difficulties, goals, and values. For Fleck-Henderson, the main takeaway from Perry’s work was that the personal growth and academic education of college students were intimately intertwined. “It’s inevitably emotional and intellectual and ethical all wrapped into one. And the Bureau's philosophy was that you couldn't tease those apart,” she says. “You couldn't say all the emotional and social stuff belongs in one office, and all the intellectual and study skills stuff belongs in another.”

The opening of the ARC is the latest development in the decades-old negotiation around what belongs in which office.

Its beginnings trace back to Perry’s day. In a 1949 memorandum, Perry defined the BSC’s role as primarily academic, but noted that “values, attitude, and emotions” inevitably arose during academic counseling, and that BSC counselors could provide therapy in cases that did not involve severe psychiatric problems. But even though the BSC shared responsibility with University medical facilities for psychological services, it was Perry’s strict intention to keep the Bureau’s counseling non-medical in nature.

Fleck-Henderson’s position aligns with her mentor’s. “I would never have taken that job if there had been a medical model. There was never any diagnosis,” she says. “Part of life includes being unhappy, struggling, having to come to terms with new knowledge… That doesn't belong in a medical facility. And to medicalize all of it is wrong. And expensive.”

However, by 2004, administrators deemed this definition of the Bureau’s role in relation to medical care outdated. That year, the BSC was moved underneath Harvard University Health Services, and counselors were required to be clinically licensed. If the BSC was going to provide both counseling and academic support, the logic was that “it should be supervised by the health services rather than the college,” explains Paul J. Barreira, the former director of Harvard University Health Services. BSC counselors objected strongly to the move, perceiving it a threat to their non-clinical model.

In 2015, the administration returned the BSC to the College. But the move brought with it the beginnings of a strict distinction between academic and psychological services. Sindhumathi Revuluri, associate dean of Undergraduate Education and interim director of the BSC, says that “the decision basically boiled down to, we don't need to medicalize academic support.” This idea mirrors those of Fleck-Henderson, except that Revuluri did not incorporate counseling into BSC services, reserving that role for HUHS. “There's a sense that the Bureau was still offering counseling, but it actually wasn't, really,” Revuluri says.

Revuluri frames the replacement of the BSC with the ARC as a further clarification of the distinction that the 2015 move established. She says that the Bureau’s mission became unclear following the move. The ARC’s role, meanwhile, is clearly specified. In an emailed statement, she wrote that “the ARC offers a warm, empathetic environment that stands ready to provide the academic resources our students need to thrive, and to work with partner offices to ensure that all students are connected with the resources that are right for them.”

Beyond procedural clarity, the move to modernize the definitions of counseling and academic support is, in part, an attempt to better serve the current student body of present day, rather than that of a 1950s Harvard.

Revuluri cites the specificity of the Bureau’s initial target demographic — WWII vets — as well as the relative homogeneity of students Perry studied, to argue that Perry’s framework is inadequate for today’s Harvard students. The ARC’s model, according to Revuluri, expands access by “[removing] all costs” for its services, including classes and peer tutoring, which at the BSC were subsidized on a sliding scale. She also emphasizes the ARC’s role as an improved resource for neurodiverse students.

Revuluri finds the Bureau’s non-directive counseling inefficient. “It could be very expansive. It could also take a very long time,” she says. The ARC’s goal, according to Revuluri, is to avoid this problem. “If you come into the ARC, I want you to leave with a sense of what you can do today to help you get your homework done… I don't want you to just feel better. I also want you to have things that you know you can do to keep doing better.”

But what Revuluri considers is a waste of time is a “time-out” for Fleck-Henderson. The former counselor saw the Bureau as a respite from the unidirectional push toward achievement so prevalent at Harvard. “[The Bureau] felt countercultural to Harvard in some ways, I think because it was never ‘How can we help you succeed?’ It was always ‘How can we help you learn about yourself and about your world, about what you want?” she recalls.

Lewis argues that accessibility improvements don’t compensate for the loss of the BSC’s counseling services, noting that such improvements could have been achieved without overhauling the BSC’s model. The distinct split between counseling and academic help, in his view, has left an important niche unfilled. “I always thought that ‘Bureau of Study Counsel’ was a wonderful name, exactly because nobody understood quite what it meant,” Lewis says. He notes that whether because of personal aversion or cultural stigma, many students may not seek help at a medical mental health facility clearly labeled as such. This demographic presents a need that the Bureau has been uniquely situated to meet.

While choosing a model of mental health and academic support that works best for all students may be an impossible task, Fleck-Henderson proposes an alternate role for the University — if not as arbiter, then as doorstop: “People do vary in whom they're willing to talk to,” she says. “Some people will talk to chaplains who won't talk to somebody in the Bureau or somebody at Mental Health… Some people will talk to another student who wouldn't talk to any of those other people…Why not have as many doors open as you can?”