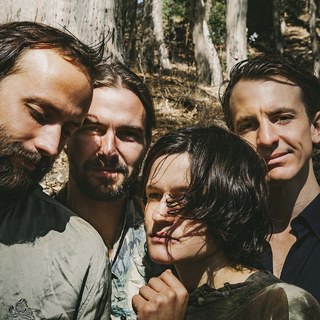 Just over five months ago, New York-based indie rock group Big Thief paid the cosmos a visit on their third studio album, “U.F.O.F.” (short for “U.F.O. Friend”). Despite the band’s inevitable return to Earth, their latest release retains an otherworldly poignance. Like the sprawling Texas desert home to the album’s recording studio, “Two Hands” evokes a sense of wistful isolation and the boundless persistence of life.

Anchored by the guileless, soulful vocals of lead singer Adrianne Lenker, Big Thief’s most recent work embodies the triumph of quiet austerity over bombast and spectacle. The album’s minimalist instrumentation provides the ideal framework for its expressive lyrics, which Lenker renders with haunting delicacy. Each quiver of her voice or slightly off-key note reveals an unapologetic authenticity rarely seen in any aspect of modern life.

The album’s lead single, “Not,” demonstrates the band’s willingness to subvert musical and lyrical tropes. Instead of generating heightened emotion with soaring intervals, Lenker’s voice remains on the same two notes, only a step apart, throughout the chorus. Over time, the recurrence of each note creates a lingering pedal point, acting as a hinge for the accompanying instrumental snippets and guitarist Buck Meek’s intermittent vocal harmonies. The song’s lyrics, which boil down to a series of negations, further emphasize its relentless, repetitive quality. At times, Lenker appears to revel in the very things she rejects, such as warmth and sensuality. “Not food / Not to eat,” she sings in the second chorus. Then, the sudden disappearance of guitar and bass leaves her alone over a measured drumbeat. “Not what you really wanted,” she continues, her voice deepening into a snarl before giving way to a brash, freewheeling guitar solo. Each denial raises broader questions about human uncertainty and dissatisfaction. If food is not enough to sustain us, then what is? And what does Lenker think we really want? In listing what is not, she simultaneously affirms all that could be.

The remaining tracks attempt to bridge these gaps. Lenker celebrates the more tangible facets of earthly life: a full moon, the smell of dewy grass, the comfort and stability of a new relationship. Still, she acknowledges that her world, though overflowing with love and beauty, is far from faultless. “The Toy” captures the fear and confusion caused by the constant threat of gun violence. “‘Cause the toy in my hand is real / The toy in my hand is real,” Lenker repeats with increasing urgency, as if in disbelief at the prevalence of lethal weapons in society. On “Shoulders,” she assumes the perspective of a victim of domestic violence who struggles to reckon with her father’s murder of her mother. “And the blood of the man / Who killed my mother with his hands / Is in me, it's in me in my veins,” she sings, conveying the narrator’s disgust and guilt for her father’s crime. The album’s second single, “Forgotten Eyes,” contains a thought-provoking verse about the passive callousness of pedestrians rushing by the homeless. “Is it me who is more hollow as I’m quickly passing by?” Lenker asks, forcing listeners to consider their complicity in the world’s unfairness. In the chorus, she pleads with her audience for generosity and compassion: “Everybody needs a home and deserves protection,” Lenker insists, her voice rising to a dissonant wail.

After their brief escape to outer space, Lenker and her bandmates find their way back home on “Two Hands,” eschewing the extraterrestrial sheen of “U.F.O.F.” for simpler, more human melodies. Free from the overwrought production that dampens and homogenizes mass-produced pop, the album pays homage to the group’s imperfect, intimate creative process. Upon their much-awaited landing, Big Thief delivers a visceral but nuanced snapshot of life on Earth with their own two hands.