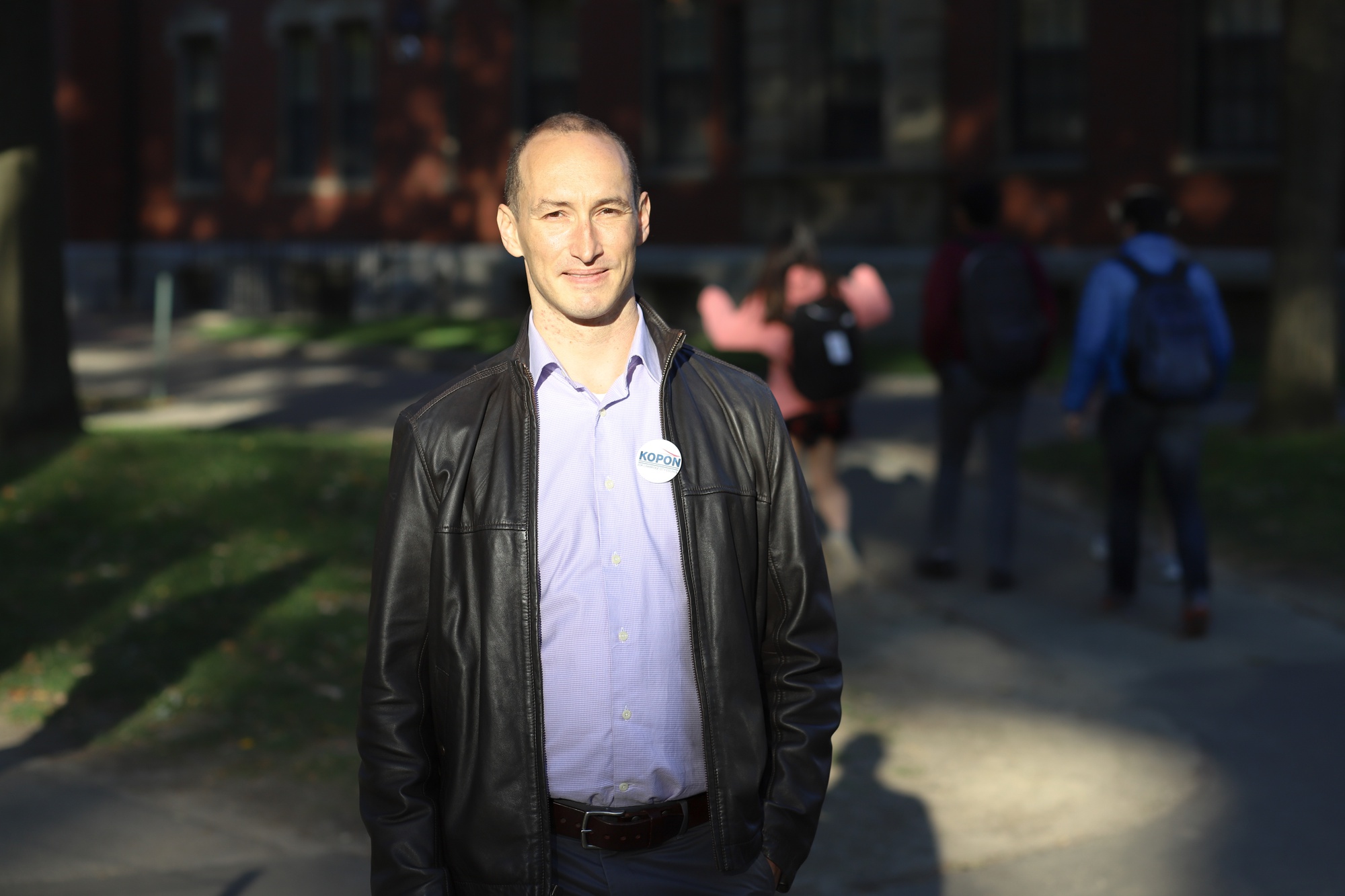 Derek Kopon, an astrophysicist and engineer at the Harvard-Smithsonian Center for Astrophysics, is running for Cambridge City Council. By Ryan N. Gajarawala
Advertisement
Advertisement

Shooting for the Stars with Derek Kopon

As an astrophysicist, environmental activist, and now a candidate for Cambridge City Council, Derek A. Kopon finds inspiration at the intersections.
By Benjamin X. Chang

As an astrophysicist, environmental activist, and now a candidate for Cambridge City Council, Derek A. Kopon finds inspiration at the intersections.

When asked how his career in astrophysics relates with his campaign for city council, Kopon pauses before answering, “Astrophysicists fall in one of two categories, you're usually either an observer or a theorist… You need those two people need to come together and actually have a meeting of minds and see if the theory matches reality.” Kopon believes that this same merging is necessary when dealing with complicated policy initiatives.

Kopon is currently an astrophysicist and engineer at the Harvard-Smithsonian Center for Astrophysics. After graduating from Cornell with both bachelor’s and master’s degrees in engineering physics, he joined the aerospace industry. He was involved in producing telescopes for NASA’s Jet Propulsion Laboratory, as well as engineering predator drones for the U.S. defense industry. However, he stopped when he realized that the technologies he was developing were being used in the Iraq War.

“That was probably a war that shouldn't be fought,” he states. “And so around 2006, 2007, I really started looking for things that I could do with my expertise that were not related to defense.”

Kopon pivoted back to astronomy, pursuing a graduate degree at the University of Arizona and then working as a postdoc in Germany. In 2015, he moved to Cambridge to work at the Harvard-Smithsonian Center for Astrophysics, and “scraped together” his life savings to buy a condo.

Recently, Kopon became aware of an affordable housing overlay proposal drafted by the city council, aimed to help affordable housing developers create new units more efficiently. After looking into the proposal, he found that he disagreed with on many points.

As he starts to enumerate his issues with this proposal — including its rushed timeline, negative environmental impact, zoning issues, and the lack of evidence supporting it — Kopon pauses abruptly. Frustration is palpable in his voice as he explains, “I'm trying to think for a minute because it's hard to know that there are so many bad aspects of this policy.”

This issue is personal to Kopon: He hopes to raise a family in Cambridge, and he believes that this policy will adversely impact his family and families around him. He talks passionately about how it will affect his elderly neighbors, many of whom have lived in Cambridge for several decades. To understand the origins of this policy, he decided to start attending city council meetings, and soon decided to run for council himself.

Though Kopon says that his decision to run for city council was unexpected, he smiles with pride as he talks about his campaign, noting that the highest percentage of his campaign contributions are donations under $200. All of his donations have been from Cambridge residents, other than his Uncle Tommy from Colorado and a friend from college.

His scientific career has strongly influenced his political aspirations, with environmental policy being one of the cornerstones of his platform. At Cornell, he was involved in environmental activism groups, and he is a strong advocate of solar energy. He calls for mandatory solar power on all new developments in contrast to other candidates who are calling for just “solar-ready” developments.

He supports his stance by saying, “Other cities have already done this. Watertown already has a mandatory solar ordinance and that's something where I think Cambridge should have been a leader.”

Despite his concerns, Kopon is very optimistic about the future of the council and the city. While walking back to Harvard Square, Kopon points out yard signs for various candidates that he knows and respects.