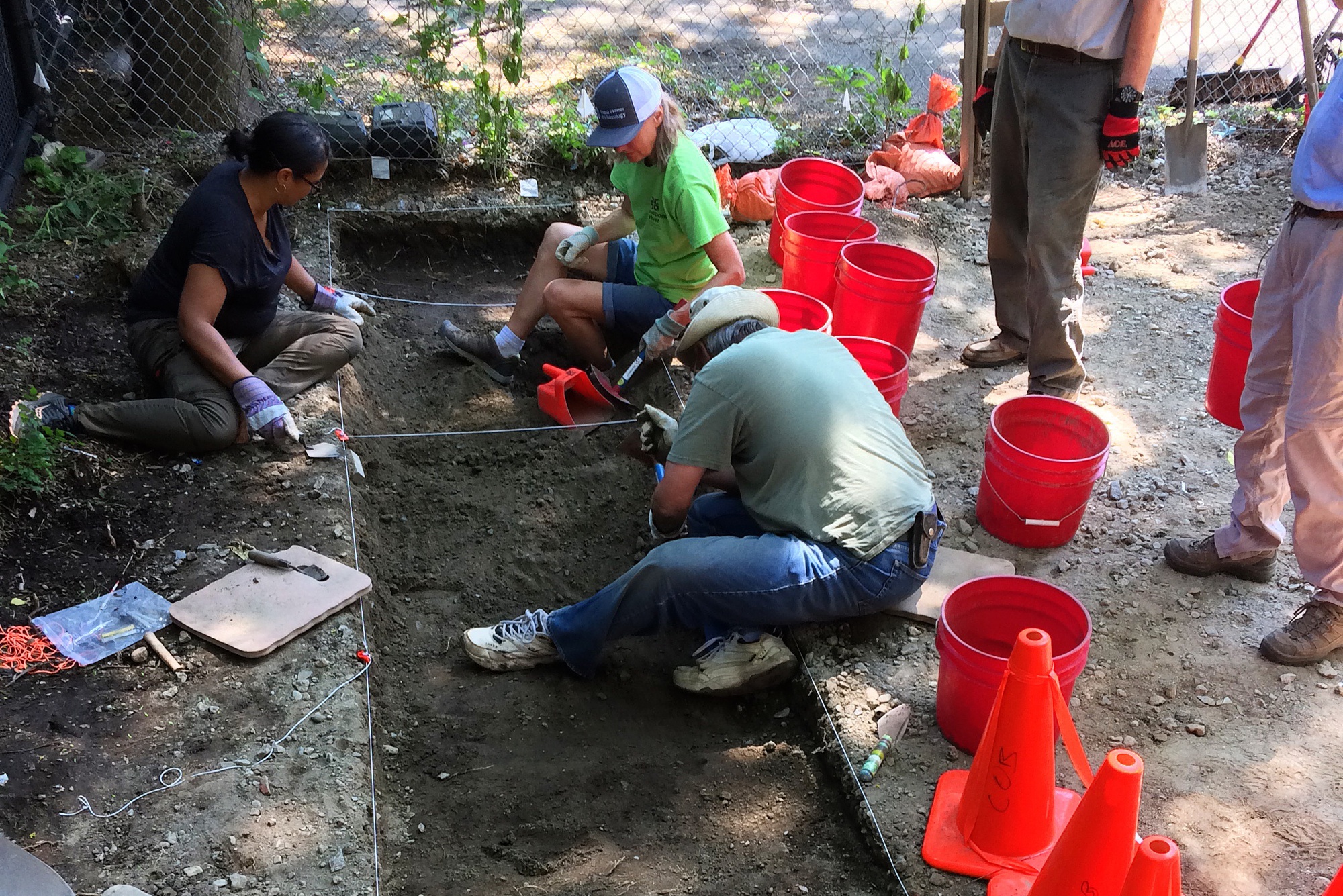 Volunteers excavated over 6 feet of earth during Boston's first archaeological dig of Chinatown. By Courtesy of City of Boston Archaeology Program
Advertisement
Advertisement

The site looks like any other urban archaeological dig, scattered with fluorescent red buckets and cones, dirty gloves and shovels, and a small group of volunteers poring over the six feet of excavated earth and rubble below them.

A few blocks from the historic Chinatown Gate, these archaeologists are procuring artifacts from the pits. Their voices, speaking in both Chinese and English, meld and fill the summer air. From the earth, they pull up debris dating back to 1970s Chinatown: melon candy wrappers, burnt cigarette wrappers, cassette tapes, empty soda bottles. These seemingly ordinary objects are part of an ongoing venture — the first of its kind in Boston — to uncover the history of Chinese immigrants.

Boston City Archaeologist Joseph M. Bagley never anticipated that he would lead the city’s first archeological dig of Chinatown. Bagley mentioned his interest in Chinatown as a potential site during a talk about urban archaeology at Boston University. He was then contacted by Tunney F. Lee, an audience member at the talk and former head of the Department of Urban Studies and Planning at MIT. Lee, who grew up in Chinatown, connected Bagley with the Chinese Historical Society of New England (CHSNE), an educational organization focused on documenting the history of Chinese immigrants. With the help of Lee and members from CHSNE, they identified a location for the dig — 6 Hudson St.

Lee remembers the buildings on Hudson St. from his own childhood. “There were three buildings there that were demolished, the dig was at number six.” He would get his hair cut right next door, at number eight.

The dig process began in the winter of 2018, with months of background research into records of previous 6 Hudson St. residents and permit applications. From the beginning, Bagley saw informing and including local Chinatown residents as a crucial step. Bagley and his team presented their research plans to different community groups, addressing their questions and concerns. “Showing up on the site and just digging is a very colonial thing to do,” Bagley says. They also printed stories in Sampan, New England’s only bilingual Chinese-English newspaper, “so that the people that read the newspaper at least would be able to see that we’re coming,” Bagley adds.

Beyond informing the community of the dig, Bagley wanted to ensure that the community was able to participate. So, although the team was ready to break ground in mid-April, Bagley and the CHSNE agreed to push the official start date until early July so that local Chinatown students would be able to take part in the dig. While Bagley’s team reserved volunteer spots for Chinatown residents, they had around only three to four Chinatown residents for each week. But Bagley noted that the site often attracted large groups of local spectators.

“We had a lot of residents that hang out in the park come up and having really long conversations with each other about what we were digging,” Bagley says.

The dig ended abruptly in late July, after a little over three weeks of excavation. The archaeologists had reached the water table, the point beyond which, no matter how far they continued to dig, water would continue to fill their trenches and impede their progress. “We'd have to literally build a dam around the site to keep the water out of it and continuously pump it out, which we just didn't have the technology or the engineering to do,” says Bagley.

They dug deep enough to be on the brink of encountering material from the 19th century — and ironically, water is beneficial for the preservation of artifacts. But Bagley and his team could not continue. They were underfunded and unable to pursue an underwater dig by hand.

Despite its abbreviated run, the archaeologists found 1,699 artifacts that Bagley calls “emblematic” of Chinatown’s rich history. From a leg of a toy dinosaur to cassette tapes illustrating the music preferences of Chinatown residents in the 1970s and 1980s, Bagley hopes that their finds can help preserve the narratives of a historically marginalized community. 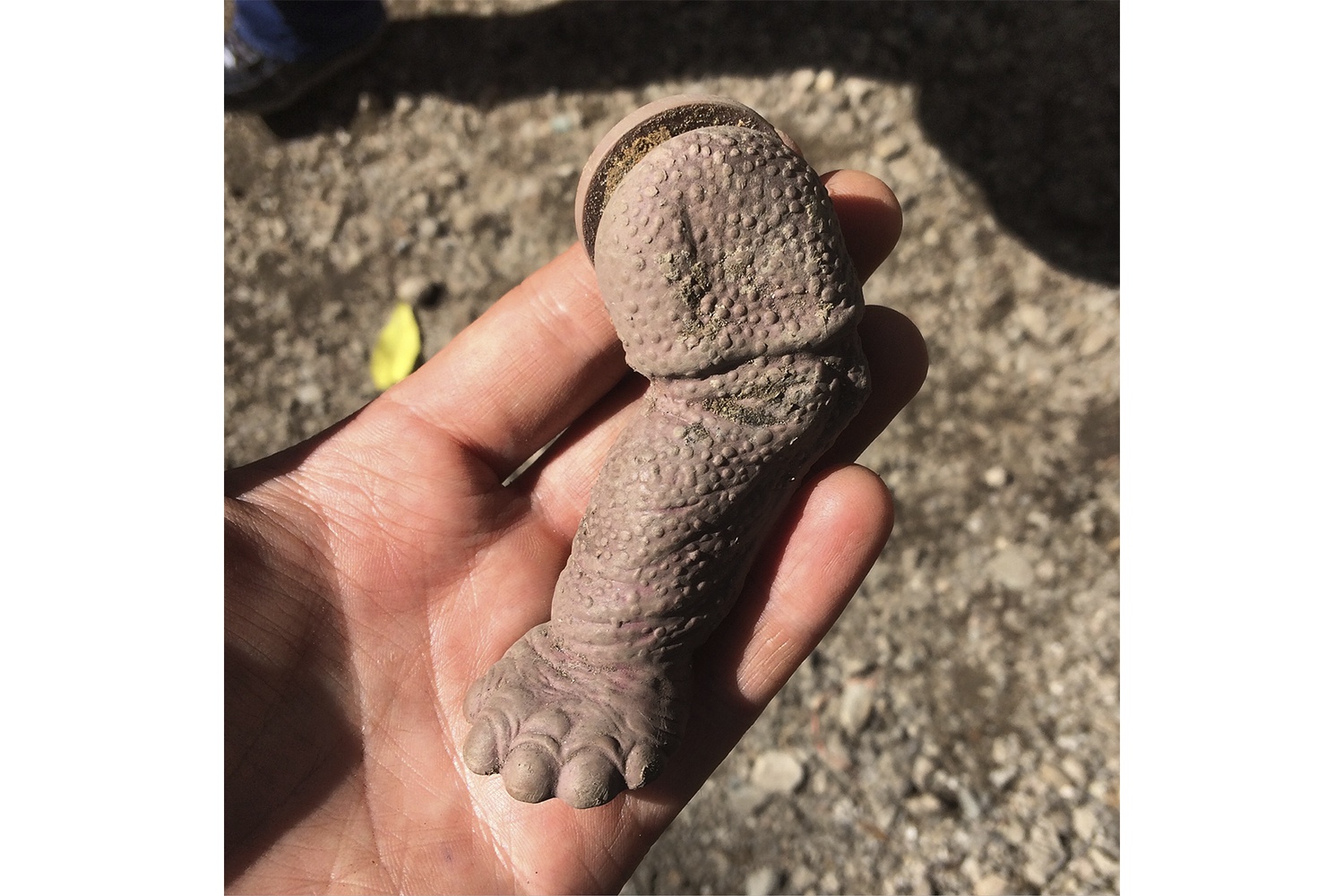 At the site of an archaeological dig in Boston's Chinatown neighborhood, interesting artifacts were unearthed, including a toy animal leg, melon candy wrappers, burnt cigarette wrappers, cassette tapes, and empty soda bottles. By Courtesy of City of Boston Archaeology Program

Though Lee characterizes the findings as “meager,” he argues that the significance lies in conducting the dig itself. “It gives us the history of Boston in some ways, too, not just Chinatown,” he says.

However, according to Bagley, the artifacts that they found illustrate “a very distinct Chinatown” — one that illuminates the lifestyle choices of former residents. “We're still in the process of trying to squeeze out the meaning of everything,” Bagley says.

The dig also offered a sense of community engagement among Chinatown residents. “It's been really gratifying to work with the community. They understand that we’re interested in the site and the stories because they're being underrepresented,” Bagley says. He notes that the dig wasn’t focused on the “old dead white guys” who are “heavily saturated in the historic record.”

Performing a dig in Chinatown does not uncover new stories, Bagley says. Instead, it creates new precedents to tell existing stories, ones that are often overlooked. This dig is one of many that Bagley hopes to undertake to shine light on underrepresented communities; others include digs that focus on the stories of African American, Native American, and LGBTQ communities in Boston.

The soil that couldn’t be explored by this dig in Chinatown holds stories of Syrian and Irish diasporas, the stories of other Bostonians. To Bagley, pursuing these layered histories through archaeology provides “a more complex version of time.”