Can ‘Between Two Ferns: The Movie’ Save Netflix? 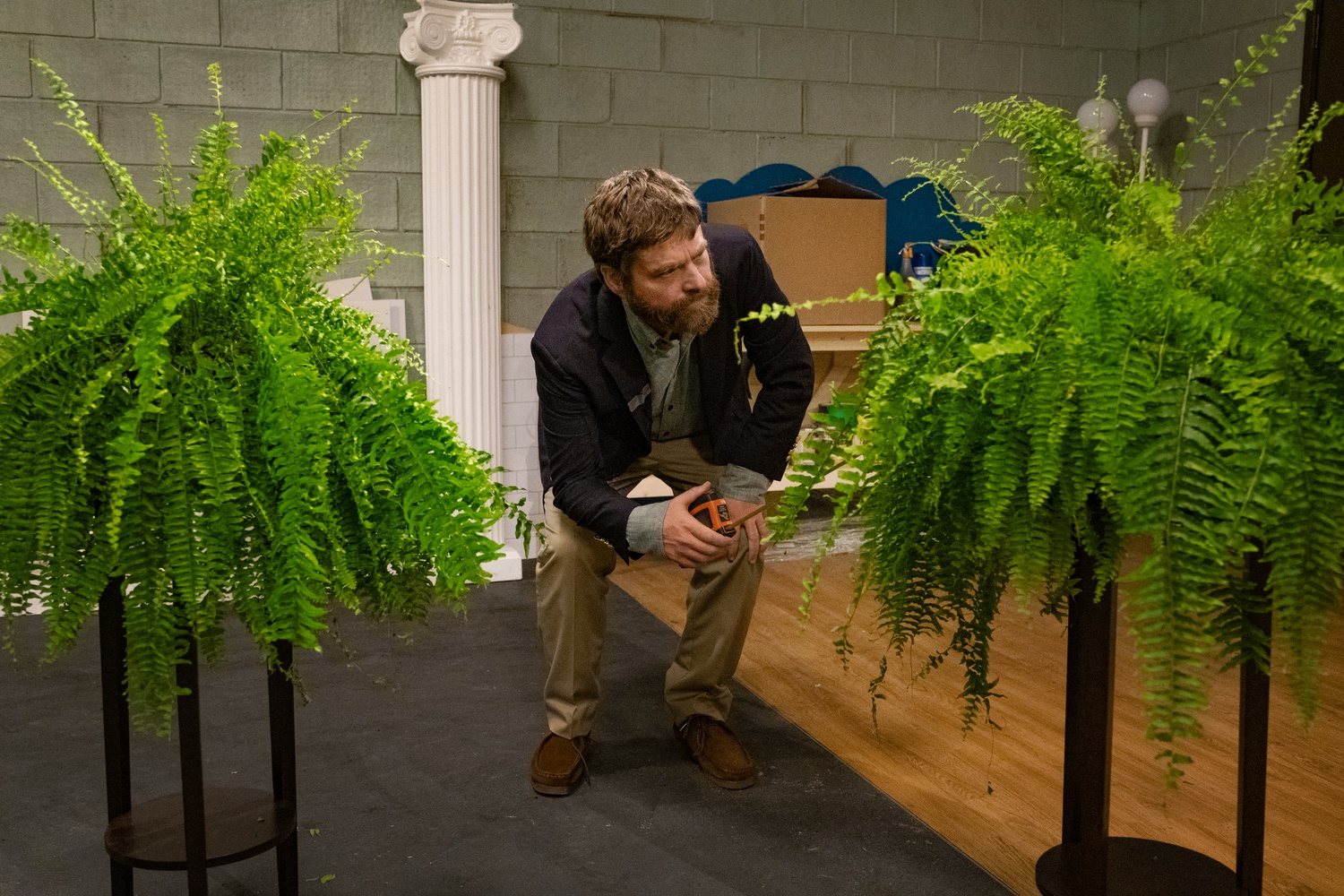 Zach Galifianakis as himself in “Between Two Ferns: The Movie” (2019), directed by Scott Aukerman. By Courtesy of Netflix
By Jacob R. Jimenez, Contributing Writer

About a decade ago, Zach Galifianakis began interviewing celebrities on what would become the Emmy-winning online talk show, “Between Two Ferns.” Now, with an absolutely star-studded cast, "Between Two Ferns: The Movie" takes on Netflix for a cross country comedy with more interviews, more awkward stares, and of course, more ferns.

Basically an agglomeration of “Between Two Ferns” episodes, the movie follows Zach Gallifianakis and his ragtag crew across the country as they attempt to complete 10 interviews in two weeks for a chance at his own network talk show. Who do they interview? Try Matthew McConaughey, Brie Larson, Keanu Reeves, and Chance the Rapper for starters, but the list goes on.

The online show first aired on Funny or Die in 2008 and took off a few years later through YouTube. Some of the most viewed guests include Brad Pitt, Justin Bieber, and Barack Obama. In each episode, Galifianakis asks his guests degrading but occasionally hilarious questions without giving them time to answer. His rolling insults and gawky stares fuel the show, but the awkwardness that “Between Two Ferns” thrives upon produces mixed results. Viewers find themselves caught in a three-way staredown, feeling as uncomfortable as the celebrity interviewee, or howling at Galifianakis’ crude humor. There’s no in-between.

Fortunately for "Between Two Ferns: The Movie,” there are more ridiculous comedic moments than awkward stares — at least in the interviews. Outside of the “Between Two Ferns” interviews, there is little to no substance or consistent humor in this film. The characters have rather bland personalities and count on their random behavior for punchlines. When Carol Lauren Lapkus walks in lugging a 1998 Apple iMac and introduces herself as Galifianakis’ “right hand woman,” it’s easy to laugh at the absurdity of her job. But by the time she pulls a trumpet from her purse and says she never learned to play because she thought she’d be too good, the gag doesn’t convey anything about her character — it just relies on shock factor for laughs.

The entirety of the film depends on the interviews, and for good reason. If you didn’t know of the online show before, you watched "Between Two Ferns: The Movie" because you knew every actor! It’s the same tactic “Movie 43,” starring Hugh Jackman, Dennis Quaid, Kate Winslet, and so on, used in 2013. A laundry list of actors is sure to capture anyone’s attention, but unlike “Movie 43,” the actors starring in "Between Two Ferns: The Movie" don’t act. They aren’t supposed to. They’re supposed to sit and be berated by Zach Galifiankis while withholding their laughter, and that’s supposed to be the source of comedic tension. But people who haven’t seen the online show wouldn’t know that, and so would be disappointed.

What’s the big deal? If the movie is funny, it shouldn’t matter how much the bankable stars act. Unfortunately for Netflix, it does. "Between Two Ferns: The Movie” is a Netflix original. The laundry list cast is more than a marketing tactic — it’s a last ditch effort. According to Forbes, this year Netflix is expected to spend $15 million on original programming, but they’re already $10.4 billion in debt. Their massive push in original content comes from rising competition, most notably from Disney. Without original content, Netflix no longer sets itself apart from other streaming services. Not only does Disney have years of highly popular original content, but they’re pulling that content from Netflix’s platform. The imminent domination of Disney on the streaming market seems to have pushed Netflix into producing content as rapidly as possible. On top of original content, Netflix has been buying access to big name films like Scorsese’s “The Irishman” coming out on Netflix just weeks after the theater premiere. Netflix can’t afford to disappoint their viewers.

"Between Two Ferns: The Movie" is a critical movie for Netflix in this battle for a unique stake in streaming services. And while the film did have hilarious moments, it was just an extension of a short YouTube talk show — not movie material. In fact, the funniest part of the whole movie was the credits blooper reel. Was it enough for Netflix to draw in more subscribers before the launch of Disney+? Probably not. But if you’re a true Netflix supporter, "Between Two Ferns: The Movie" is a gem for a quick Friday night viewing party.