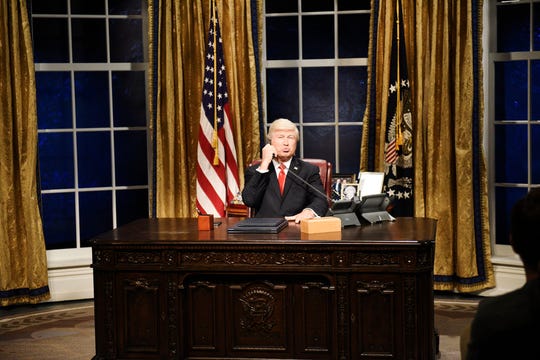 When you think of political satire in the age of Trump, it’s hard not to think of Saturday Night Live. Sure, there may be louder, bloodier, or crazier parodies of the failings of the Trump administration. But few have as wide a reach, as broad a viewership, or as much cultural clout as SNL.

Following in that legacy, this past weekend’s impeachment was SNL at its most “satirical” — or, at least, its most critical of this administration. Alec Baldwin leaned all the way into his caricature; his duck-lipped, North Korea-obsessed, Liam Neeson-loving Trump was truly in rare form. After telling Bowen Yang’s Kim Jong-Un, “I wish my country was as cool as your country,” and asking “Big Mike” Pence, “How’s church going?”, he finishes the sketch by calling a hitman to “take out” the Ukraine whistleblower.

SNL has often been lauded for pissing off the President and exemplifying the kind of “resistance” in the media he loves ranting against. Their early portrayals of Trump and his supporters (ordinary, truck-driving, laundry washing Americans who turned out to all be Nazis, white supremacists, and KKK members) certainly earned them some angry Trump tweets.

But do SNL’s political skits deserve the moral high ground they’re often given by viewers and critics just because they make Trump angry? Are they really a part of that loosely-defined “resistance” they seem to espouse?

At a time when our country is more divided than ever, SNL’s political sketches present a version of the world that is more in line with Donald Trump’s than almost everything else on television. It’s a version where rich, liberal New Yorkers laugh at truck drivers and blue-collar painters and laundresses and see the idea of supporting Trump as utterly ridiculous. The version where one side of the country sits in a room and mocks a “culture” they view as foreign and inferior to them — a culture that, most of the time, they don’t even try to understand.

I’m not here to say SNL political skits are “bad,” per se (I love Kate McKinnon as much as the next girl), and I’m definitely not here to excuse Donald Trump’s racist, dangerous, and impeachable behavior. Political satire has been around forever, and it’s an inevitable part of the way our democracy responds to presidents, especially those who don’t have the majority of the country’s support.

But there’s something particularly off-putting about the way that SNL characterizes Donald Trump’s presidency. They don’t just laugh at his odd physical characteristics (like their version of Hillary with a strained, mechanical voice) or his policy decisions. They have, in many ways, defined themselves by Baldwin’s now-ubiquitous depiction of the President, and by videos lumping his supporters together into one group of crazy idiots. They’ve won awards (Baldwin’s Emmy-winning performance was lauded as the “Most Important TV Performance of 2017”), giving speeches about the “important work” they were doing. Dozens of media outlets have praised them for being “brave and necessary television.” There’s something odd about the way they seem to assume their polarizing caricature has some kind of special moral value.

No one ever changed their minds because they got called a Nazi. I’d go even further to say that all buffoonish caricatures and wild exaggerations do is further entrench the polarization that got us in this mess in the first place.

Perhaps there’s a place for making fun of Donald Trump. But to give so much cultural weight and airtime to a show that’s singularly preoccupied with caricaturing him and his supporters seems at best oblivious. At worst, it’s blatantly ignorant of the stakes of winning over “his supporters” (who are, as a matter of fact, not a monolith and not all Nazis) — which is the only way under our current system to actually change anything. I think we can all agree that you're going to change exactly zero minds when you start off with the “joke” that all Trump voters are KKK members.

At the end of the day, when I sit down and pull up an SNL cold open video, I’m sitting down next to people who look like me and laughing at an exaggerated straw man of others I don’t agree with. And let’s be real, that’s exactly the kind of America Trump wants.

—Staff writer Joy C. Ashford can be reached at joy.ashford@thecrimson.com.