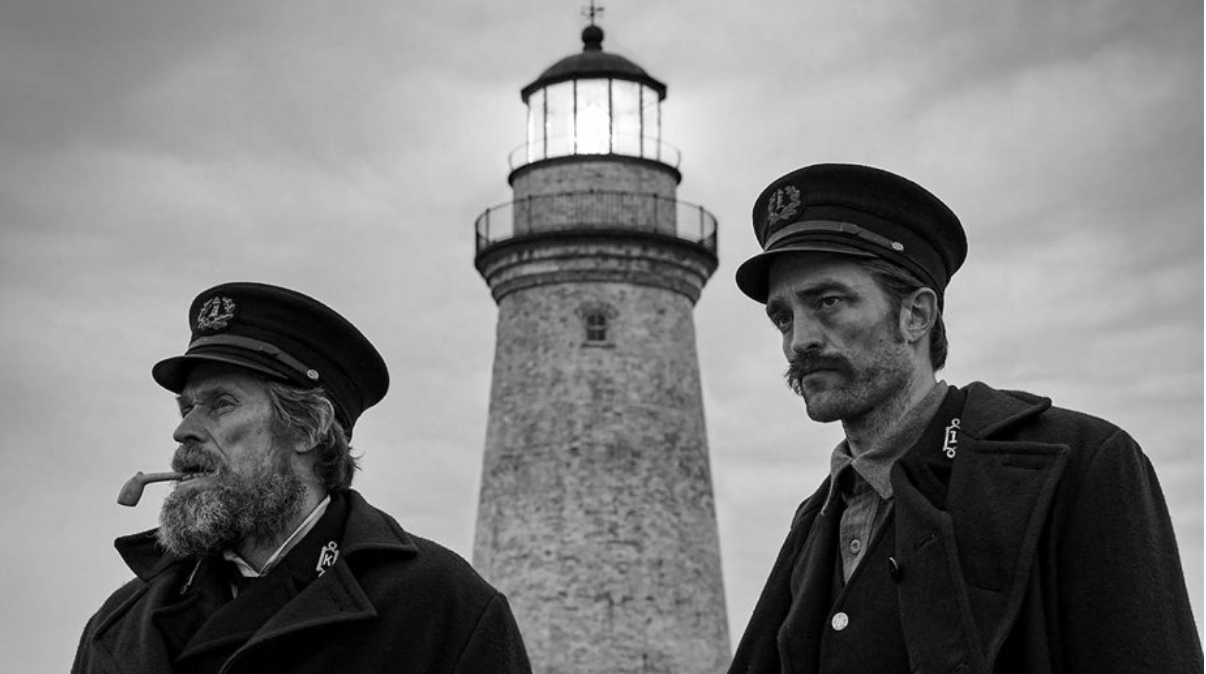 Robert Pattinson and William Dafoe star in "The Lighthouse" as two lighthouse keepers on a remote New England island in the 1890s. By Courtesy of Festival de Cannes
By Gabriella M. Lombardo, Crimson Staff Writer

When it comes to movie trailers going completely off the rails, Robert Eggers’ “The Lighthouse” takes the cake. And the cookies. And probably the ice cream, too. Starring recent indie movie darling (and future Batman) Robert Pattinson alongside resident wacko Willem Dafoe, the A24 film is a tale of two lighthouse keepers on a remote New England island in the 1890s. It is Eggers’ second feature film since his critically acclaimed 2015 horror, “The Witch,” another period piece that plays out like a fever dream. A two-hander shot in black-and-white, “The Lighthouse” is a radical film, with a nearly square aspect ratio that has hardly been used since the 1930s. Judging from the trailer, it’s Jules Verne, Hitchcock, “Moby-Dick,” and Shakespearean rage all rolled into one weird hypnotic ball of delicious mano a mano strife.

The trailer opens with A24’s signature aesthetic relish. The company’s logo flickers white against a black backdrop and the sound of a foghorn blares. A silvery shot of a lighthouse on a tiny, rocky island comes into view looking more like vintage footage than a 21st century movie. A bass lows ominously as Robert Pattinson and Willem Dafoe stare into the camera. With sunken eyes and sallow cheeks, they look like weathered 19th century sailors. Dafoe cuts a Captain Ahab-esque figure with a rugged, silvery beard, looking ready to share his preternatural knowledge that a storm’s a–comin’.

In the candlelit claustrophobia of the lighthouse, Dafoe holds a pipe and asks why a timberman like Pattinson wants to be a “wickie,” an old term for a lighthouse keeper, deriving from their duty to trim the wicks of the lighthouse oil lamps. It starts getting weird between the two men when Dafoe asks if Pattinson is keeping secrets. We get a shot of Pattinson digging a grave, followed by a shot of him peering in at Dafoe from a door cracked open. They guzzle down alcohol and dance together, then huddle beneath a table when the window above them is blown through with water. What sounds like a riotous old sailor’s ditty is sung in rounds in the background. Meanwhile, Dafoe repeats, “Why’d you spill your beans?” in voiceover until it takes on an incantatory quality.

Stuff hits the fan when Dafoe lets out a wail of biblical proportions. There is axe-wielding, tentacles, mutual strangulation, a grotesque underwater woman, and a whole lot of A24 horror madness. Finally, the music cuts out and Dafoe delivers a line that has already captured the meme-makers’ imaginations: “How long have we been on this rock? Five weeks? Two days? Help me to recollect.”

For a trailer that’s only a minute and a half long, it opens up a can of crazy to last a lifetime. And from the looks of it, Pattinson and Dafoe are the perfect ingredients for a pressure cooker film like “The Lighthouse.” So here’s to A24’s good health, and to a truly bizarre performance pairing we never knew we needed.