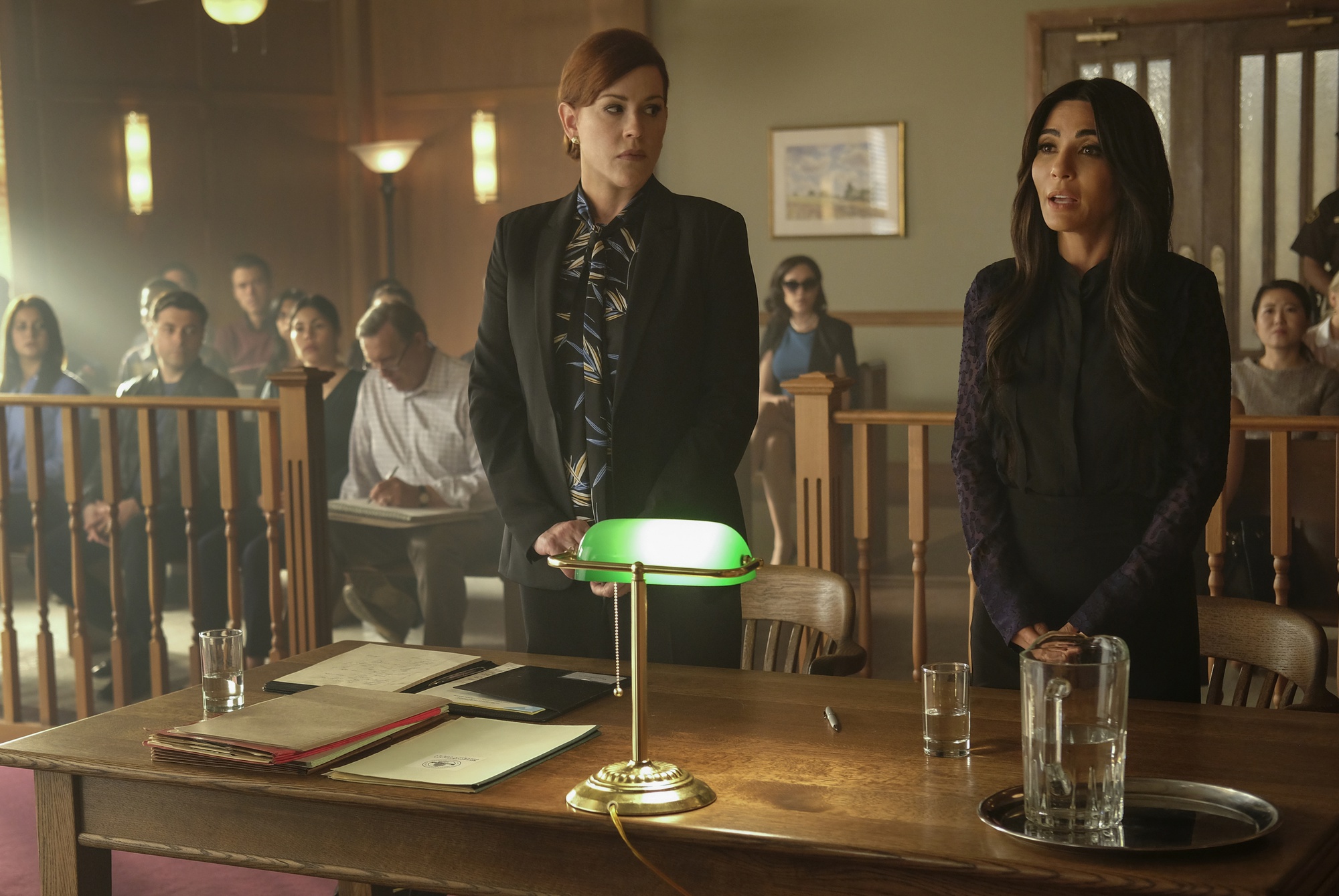 Molly Ringwald as Mary Andrew and Marisol Nichols as Hermione Lodge in Episode Five of the fourth season of "Riverdale." By Courtesy of the CW
By Caroline E. Tew, Crimson Staff Writer 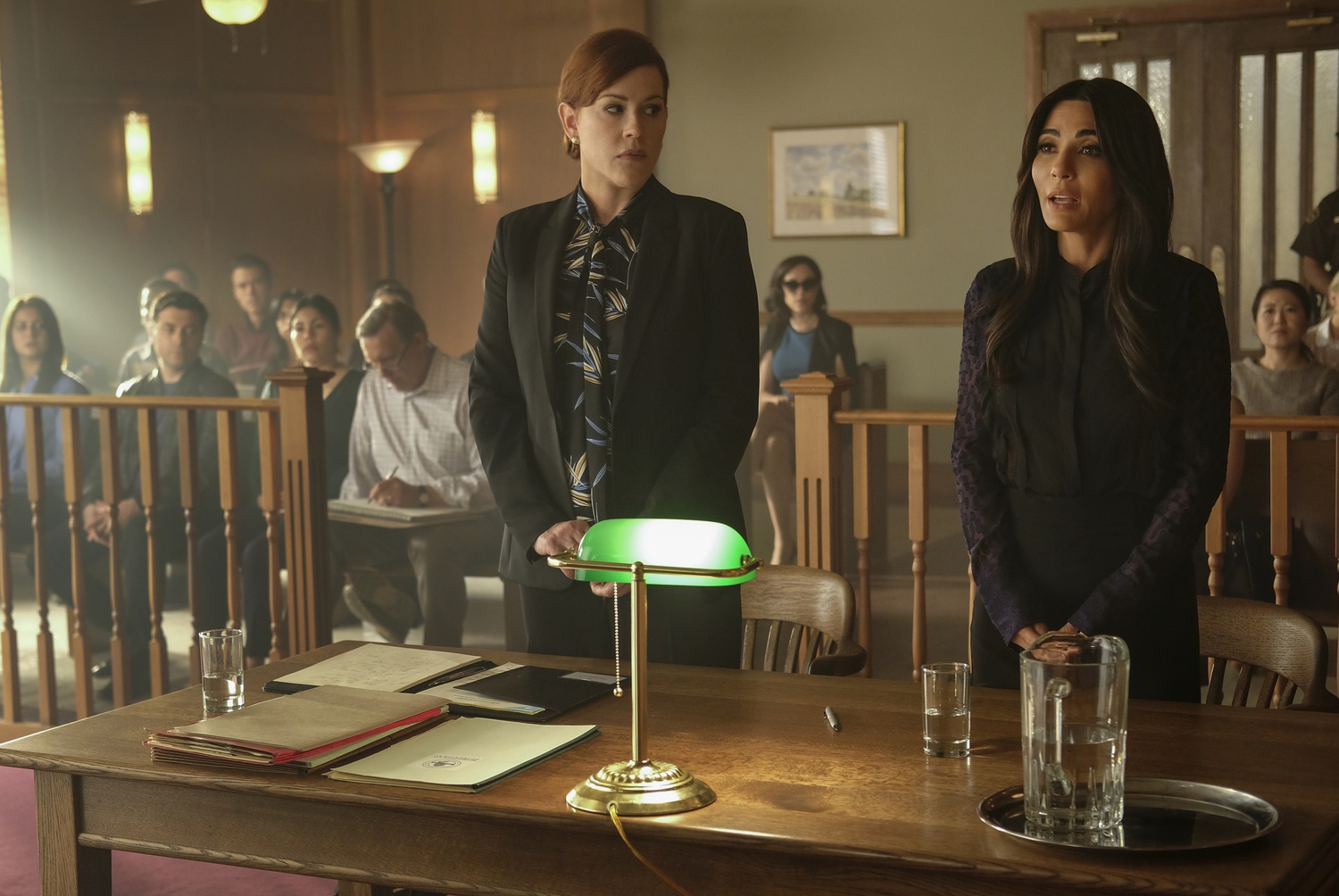 Molly Ringwald as Mary Andrew and Marisol Nichols as Hermione Lodge in Episode Five of the fourth season of "Riverdale." By Courtesy of the CW

This episode focuses mainly on two things: one of the most convoluted plot lines in recent “Riverdale” memory — the legal proceedings of the Lodge family — and the other one of the most hokey — Betty’s “serial killer” genes. The result is a mildly boring episode with the usual nonsense thrown in. It’s almost completely irrelevant, until the end when the episode flashes forward to show FP Jones (Skeet Ulrich) bursting into a classroom to accuse Betty (Lili Reinhart), Veronica (Camila Mendes), and Archie (KJ Apa) of murdering Jughead (Cole Sprouse).

“Riverdale” can’t decide how seriously it wants to take the Lodge family. On the one hand, Hiram Lodge (Mark Consuelos) is a scary mob boss who means business. On the other, are viewers really meant to believe that Veronica, a senior in high school, somehow owns a not-so-secret secret speak-easy underneath the local diner? Also, that she has the power to blackmail the state governor? Veronica says it herself, “Goals for this week: Get Mommy out of jail and make sure Daddy stays rotting in his.” And she has two papers due this week! The life of a Lodge is hard.

It gets even harder when it becomes clear that her mom, Hermione Lodge (Marisol Nichols), is guilty of the crimes she’s being charged for. They found her monogrammed Tucci bag (you read that right) full of money where Tall Boy Petite — the extremely poorly named would-be murderer from last season — was staying. Hermione can’t catch a break, because Hiram has called his other daughter (who viewers are just as surprised as Veronica is to find out about) to help clear his name. It’s unclear why the newly introduced Hermosa Lodge (Mishel Prada) is so eager to help Hiram, after being completely ignored by him for years.

But the truly ridiculous is yet to come. Betty has started taking classes in the Junior FBI program with Kevin (Casey Cott), only to realize she is able to identify a serial killer just by their picture. She’s able to do so not by their smell or their actions, but by picture alone, which feels like a slippery slope into profiling. She confirms with her doctor that she does, in fact, have the “serial killer” genes MAOA and CDH13, supposedly inherited from her father. Then, she starts to have an existential crisis.

Suddenly, repressed memories come to light. There is a flashback to when she hallucinated a second version of herself, who said, “Betty, we both know that we drowned Caramel.” Betty now remembers killing her childhood cat: First, she remembers hitting Caramel over the head with a rock; then, she remembers her serial killer father made her do it because the cat was suffering after being hit by a car. Certainly a traumatic event, but not necessarily an indicator that Betty is a future serial killer.

But, let us not forget that “Riverdale” showed us a flashback mentioning drowning then completely decided to change the script to fit their whims. They do so again when Charles (Wyatt Nash), Betty’s half-brother, reveals that he too has the serial killer genes. The problem is, he’s Betty’s half-brother through her mother, not her serial killer father. Once again, the plot holes widen. Unfortunately, it appears that “Riverdale” is going to run with this. Suddenly Betty is suspicious. She tells Kevin, “Forget ‘Is Charles gay or straight?’ I’m interested in ‘Is he a serial killer or not?’” Is this somehow connected to the VHS tapes from Episode Three? Or are we just forgetting about that?

Archie’s plot line continues to follow his battle against street gang leader Dodger (Juan Riedinger), which is so boring it barely deserves a mention. However, there is one scene where Dodger and Archie face off — Archie tells him to scram, Dodger pulls out a gun — and in the background there is a full-fledged dumpster fire, which feels a pretty apt description for this entire subplot.

Jughead is also struggling at boarding school, reveling in the opportunities of Stonewall Prep but facing bullying for being the only student in the class on scholarship. There’s some competition to ghostwrite a book for a series he’s loved since childhood, which is somehow tangentially connected to his grandfather. This could turn into a fun story, or it could get lost amid the nonsense. Time will tell.

All in all, “Riverdale” has failed — five episodes in — to establish exactly why viewers should be watching Season Four. No overarching problem has been identified and the episodes feel like an amalgamation of tying up loose ends and introducing lukewarm tensions between characters.