This Year in Arts, 1989: The Currents of Change Fill the Air 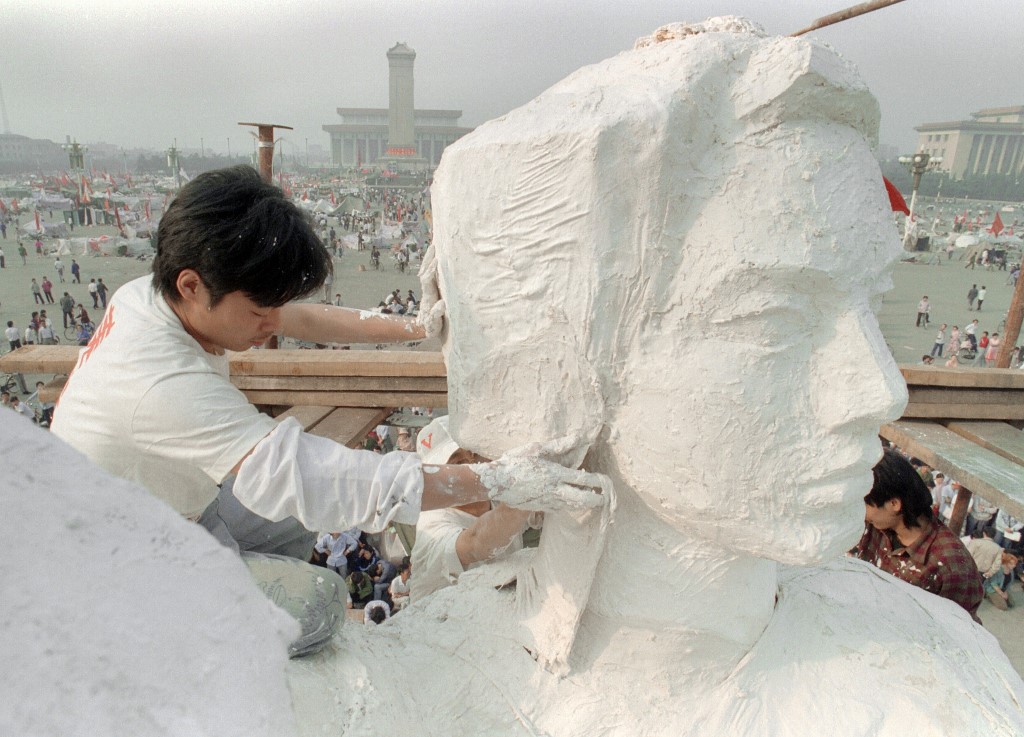 A student from an art institute plasters the neck of the “Goddess of Democracy” statue, a replica of the New York Statue of Liberty, on May 30, 1989 in Tiananmen Square. By Courtesy of Catherine Henriette/AFP
By Alexander W. Tam, Crimson Staff Writer

The currents of change in all its forms were palpable everywhere three decades ago, sweeping the globe on a massive scale. Politically, the thirst for revolution reached its peak. The Tiananmen Square democracy protests captured the world’s attention. The Communist regimes in Czechoslovakia, Romania, and Hungary dissolved, and the end was just months away for regimes in Poland and the other Soviet bloc countries. On Nov. 9, the Berlin Wall came down, leading the way to German reunification. Away from the world of revolution, Japanese emperor Hirohito died, as did the Ayatollah Khomeini, leader and founder of the Islamic Republic of Iran.

But change was not limited to political spheres. The first commercial internet service providers, for example, launched in 1989. And the arts, of course, were not oblivious to the times. In fact, they took on a central role as symbols of, responses to, or celebrations of the moment. Today, they are monuments to their time. Now, 30 years later, there are just a few examples that reflect this year of change:

On May 30, 1989, a group of 15 art students unveiled their 33-foot styrofoam and plaster creation to the massive crowd of protesters at Tiananmen Square and to the watching world. They dubbed the statue “Goddess of Democracy.” Her stance radiated dignity and confidence: eyes fixed straight ahead, head held high, both hands holding her torch aloft, one foot striding forward. Her placement, too, added to her grandeur. The goddess stood directly in the middle of monstrous Tiananmen Square, standing face to face with the colossal portrait of Mao Zedong, who hovered over the square as the embodiment of everything the protesters sought to end. She closely resembled the Statue of Liberty and yet was distinctly her own. Within her lay the zeitgeist of the moment, and so it is solemnly fitting that she met the same end as the protestors she represented. On June 4, just days after the statue’s unveiling, the Chinese military violently put an end to the protests. Amid the death and destruction lay the fragmented remains of the goddess, crushed by a tank like so many others –– a symbol, now as it was then, of Tiananmen’s hope and despair.

On Christmas Eve and Christmas Day of 1989, the legendary Leonard Bernstein conducted two concerts, one in West Germany and the other in East Germany, to celebrate the holiday season with an extraordinary amount to celebrate. The concerts centered around one great work of German art: Beethoven’s Ninth Symphony. Bernstein made one major change, though. In the final movement of the Symphony is the famous “Ode to Joy,” set to Friderich Schiller’s poem of the same name. Bernstein, however, substituted “joy” (“Freude”) with “freedom” (“Freiheit”). The result, behind Bernstein’s practiced baton and an orchestra that included members from both sides of Germany and indeed across the world, is soaring and triumphant. Bernstein’s masterful rendering, the orchestra’s skillful execution, and the overall atmosphere elevated Beethoven’s symphony into a symbol — an ode, indeed, to the joy and freedom of the moment.

American actor-singer David Hasselhoff found himself more than a star in Germany in 1989. The reason? His song “Looking for Freedom,” released as a single in 1988. The uptempo song, characteristic of the decade’s pop, is about a young man on a long and continuous search for freedom. “I’ve been looking for freedom / still it can’t be found,” Hasselhoff sings.

It was a theme that resonated with restless and frustrated Germans –– the song held the top spot on the West German charts for two months in the summer of 1989. And as the wall was on its way down on New Year’s Eve 1989, Hasselhoff was at the Brandenburg Gate in decidedly American rock star fashion, belting his hit song atop a crane platform for an adoring and jubilant crowd. His song, with its simple message, had come to represent the moment for Germans –– first their anxious longing for change, then their euphoria at having achieved it.

Posters for the Revolution
Art also reflected the historical moment in subtler, but just as significant ways. There is perhaps no better example than the posters artists created to support the revolutionary movements in Soviet bloc countries. The posters are incredible examples of using art and design to communicate to an audience. They are stark, sometimes shocking; they are sometimes metaphorical; they all are rendered with carefully chosen colors and bold contrasts. One famous poster by Tomasz Sarnecki encouraged people to vote in Poland’s 1989 legislative elections. Gary Cooper, in character for “High Noon,” strides forward behind the logo of Poland’s pro-democracy party Solidarność, ballot (rather than pistol) in hand. Posters like these were visible reminders that called on people to sustain and grow the movements they had fostered. They stand now as relics to the spirit of that moment.