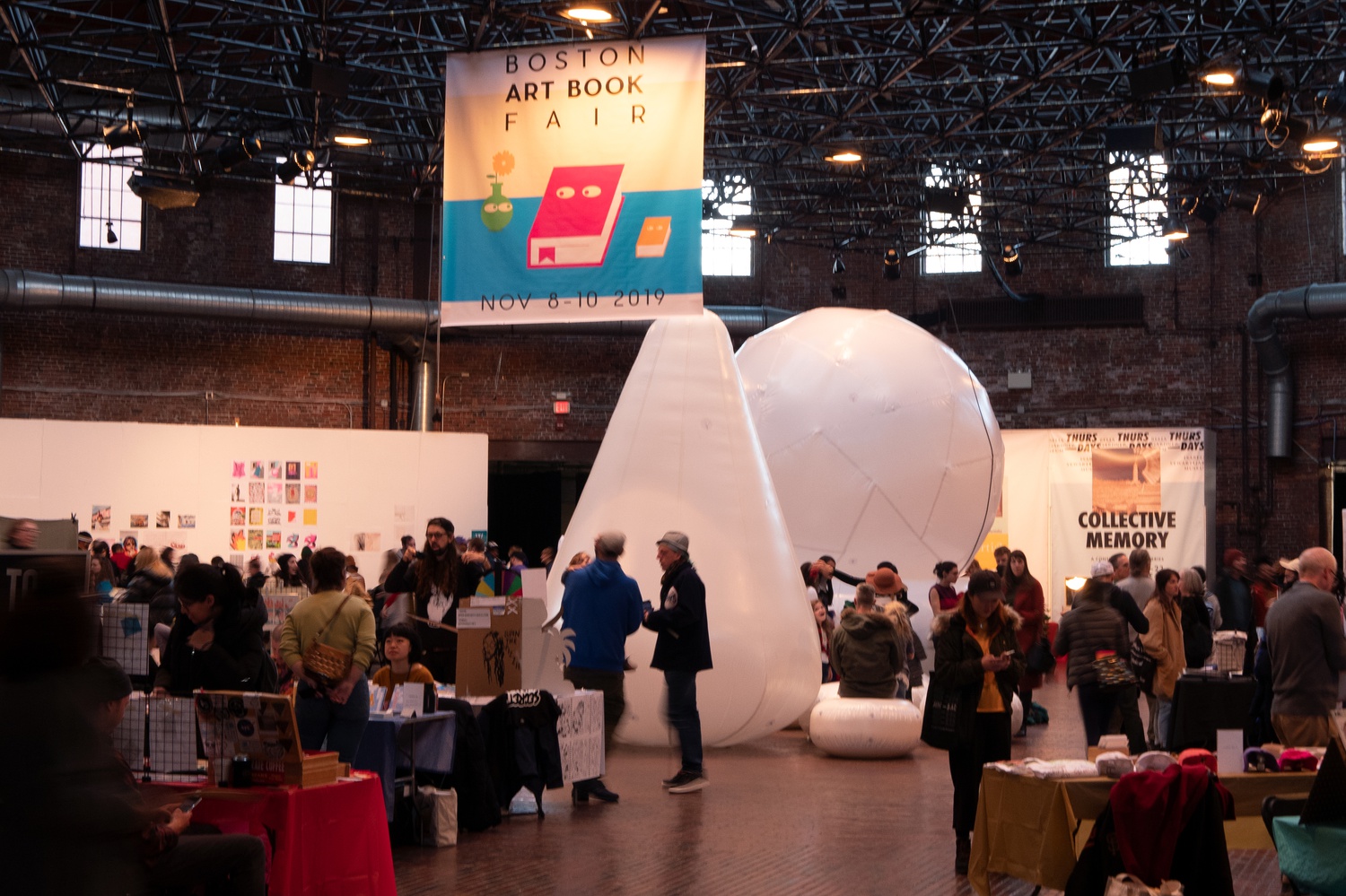 The language of art, creativity, and social change swirled through both conversation and publication at the Cyclorama for the third annual Boston Arts Book Fair. Artists and publishers alike set up booths on Nov. 8 for three days of panel discussions, art installations, workshops, and community, open to the public.

The Boston Arts Book Fair has grown into one of the largest art book fairs on the East Coast since it began in 2017. In its first year the fair housed 60 exhibitors; this year over 130 exhibitors participated in the event. The Boston Center for the Arts and Bodega, an apparel brand, sponsored the fair to facilitate conversations and community among artists and give a public platform for their art. Some artists emphasized self-worth through interactive installations, such as a blind self portrait station where fair visitors drew their faces while staring in a mirror. Others celebrated female artists, black artists, and gender nonconformity or called for prison reform and political activism.

Still, exhibitors centralized the communal impact of art that brought this event together. Kevin Austin Bryant, a Converse employee, initiated a program showcasing the artwork of young artists from Madison Park High School at the fair. He said he valued giving young students the opportunity to engage with the greater Boston art community.

“There are a lot of big publishers, big brands like ours here… for a high school student from Boston, you know, this isn’t really a reality for them, being able to afford a table like this on their own,” Bryant said. “People were asking them to sign the artwork. They were taking [posters] and it gave [the students] a level of realization like, ‘Oh wow! This is what a real artist is like.’”

The students had the opportunity to jump directly into the art world through other exhibitors — such as the Boston Compass, a free, four page monthly art and culture guide — who actively advertised their publications for submissions from new artists at the fair.

“My vision constantly is to get people involved in any way possible,” Kevin Dacey, editor of the Boston Compass, said. “I think people forget that something like this is volunteer-run and we are always looking for people to get involved and help us make it.”

Volunteer-run publications and continual expansion motivated multiple exhibitors, many of whom began as one-person-shows. Several of these artists participated in a panel discussing the challenges of independent publication. Others asked questions to see how they could broaden their art and give new artists the opportunities they had.

“All the work starts with me, Lorenzo, the artist,” Lorenzo Diggins Jr. of Colour Bloc Creativ said. “I think through me sharing my experience, I’m really opening it up to other people to explore.”

Diggins’s publication agglomerates the work of independent artists but began with his art, which he said seeks to prove that “we’re all the same.” Based out of Los Angeles, Diggins and Colour Bloc Creativ mirror the scope of the Boston Art Book Fair, bringing together passionate artists from Boston and across the country.

The Boston Art Review is one example of a local success story. Michaelann Ferro, a motion graphic designer for the Review, spoke to how the Review found its origin at the fair.

“We have a fantastic editor and chief, Jamison Johnson… [who asked] what would they like to see if there was another new publication,” Ferro said. “What she found out is that they wanted a more contemporary art review magazine … and it’s been a labor of love.”

Fair-goer Alejandro C. Eduarte ʼ23 said he appreciated seeing new and upcoming artists. After remarking on the concentration of independent publishers, Eduarte said that the fair has inspired him.

“I think it’s inspired me to look up more of the visual arts stuff that’s happening in the City of Boston,” Eduarte said. “And I think as a student… it’s really cool to know that there’s independent uncategorizable art that some of these publications are doing. So I think it’s really important for students to see some of that work.”