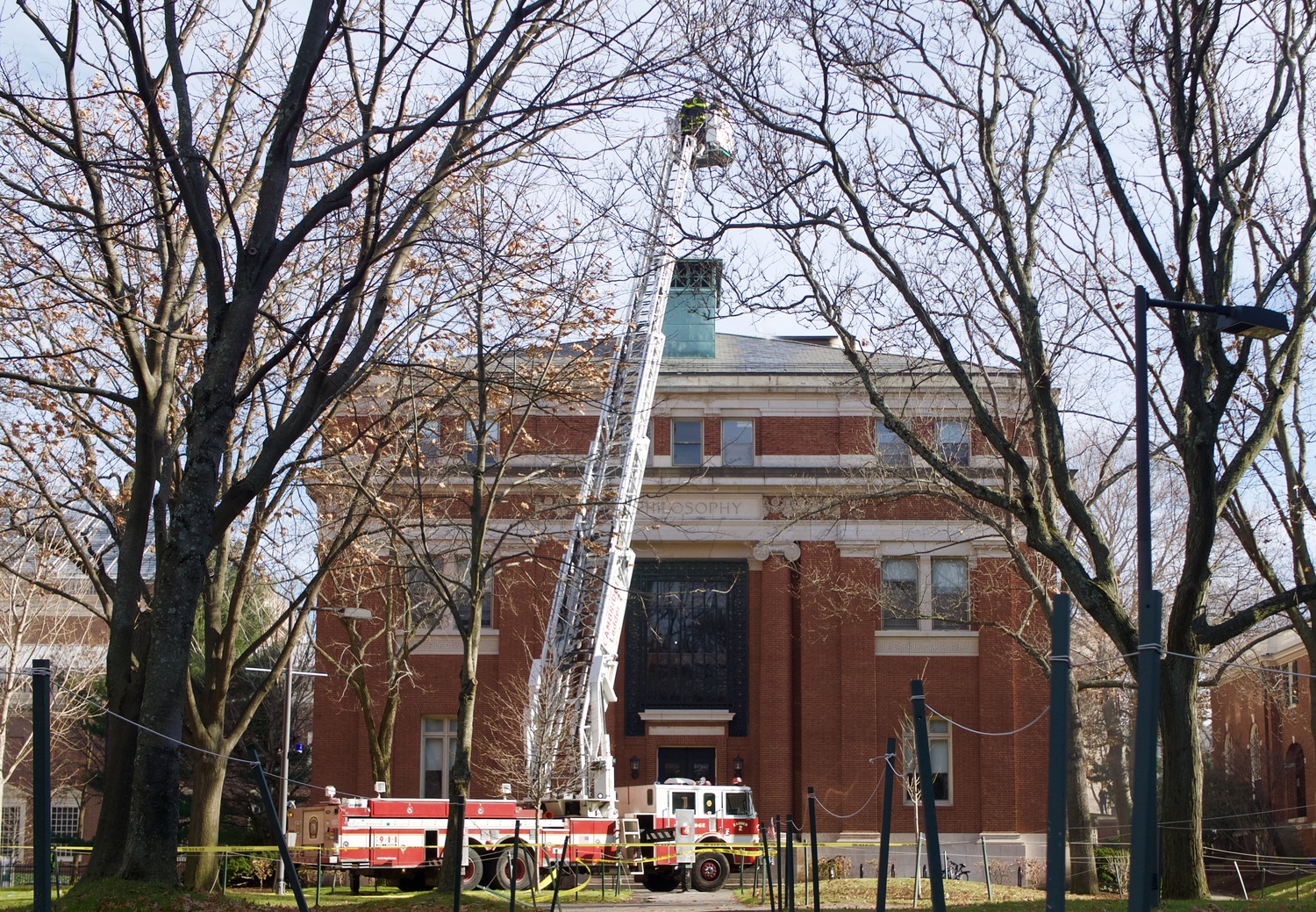 Cambridge firefighters douse the flames in Emerson Hall after smoke started pouring out of the building around noon on Friday. By Sara Komatsu
By Molly C. McCafferty, Crimson Staff Writer

The fire originated in a chimney-like shaft in the building where an exhaust pipe runs from a basement generator through a vent in the ceiling, Acting Fire Chief Gerard E. Mahoney said in an interview. Construction workers performing a generator test reported just before noon that they smelled smoke in the building, and as of roughly 1:45 p.m., firefighters believed the fire to be under control.

Mahoney said that the building was unoccupied other than the construction workers and that there were no injuries.

Tourists, reporters, and other onlookers gathered in and around Harvard Yard Friday afternoon as firefighters scaled the roof of Emerson — which houses the Philosophy department — where smoke was funnelling out of a vent.

Firefighters had difficulty accessing the fire because of masonry surrounding the pipe chase. Using axes and power saws, crews made several holes in the roof to ventilate and let in water, Mahoney said. He said the damage from the fire was not extensive.

“I mean, there’s some damage — we had to breach a couple of walls up on the top floor to access this, like, chimney area, and of course there’s always any time you have a fire there’s water damage — but I don’t think there’s too much on the lines of actual fire damage or smoke damage,” Mahoney said.

He compared the situation to a related incident that happened in the adjacent Sever Hall in August, adding that he plans to speak with the engineers and construction workers on the project about certain steps they should take to prevent similar fires from happening again.

“They’re related in the sense that the nature of what was going on is very similar. So we’re a little concerned about how this happens again,” Mahoney said.

As of 3 p.m, the fire had been extinguished, though a fire watch would remain at the scene through the evening, according to University spokesperson Jonathan L. Swain.

“Due to the holiday break, there were no classes or other activities taking place in the building at the time of the fire, and with that no injuries to faculty, staff or students. Harvard appreciates the quick response and efforts of CFD crews to address and extinguish the fire,” Swain wrote.

The University will assess the damage to determine if students and faculty will be able to access the building when classes resume Monday.

—This is a developing story. Check thecrimson.com for updates.