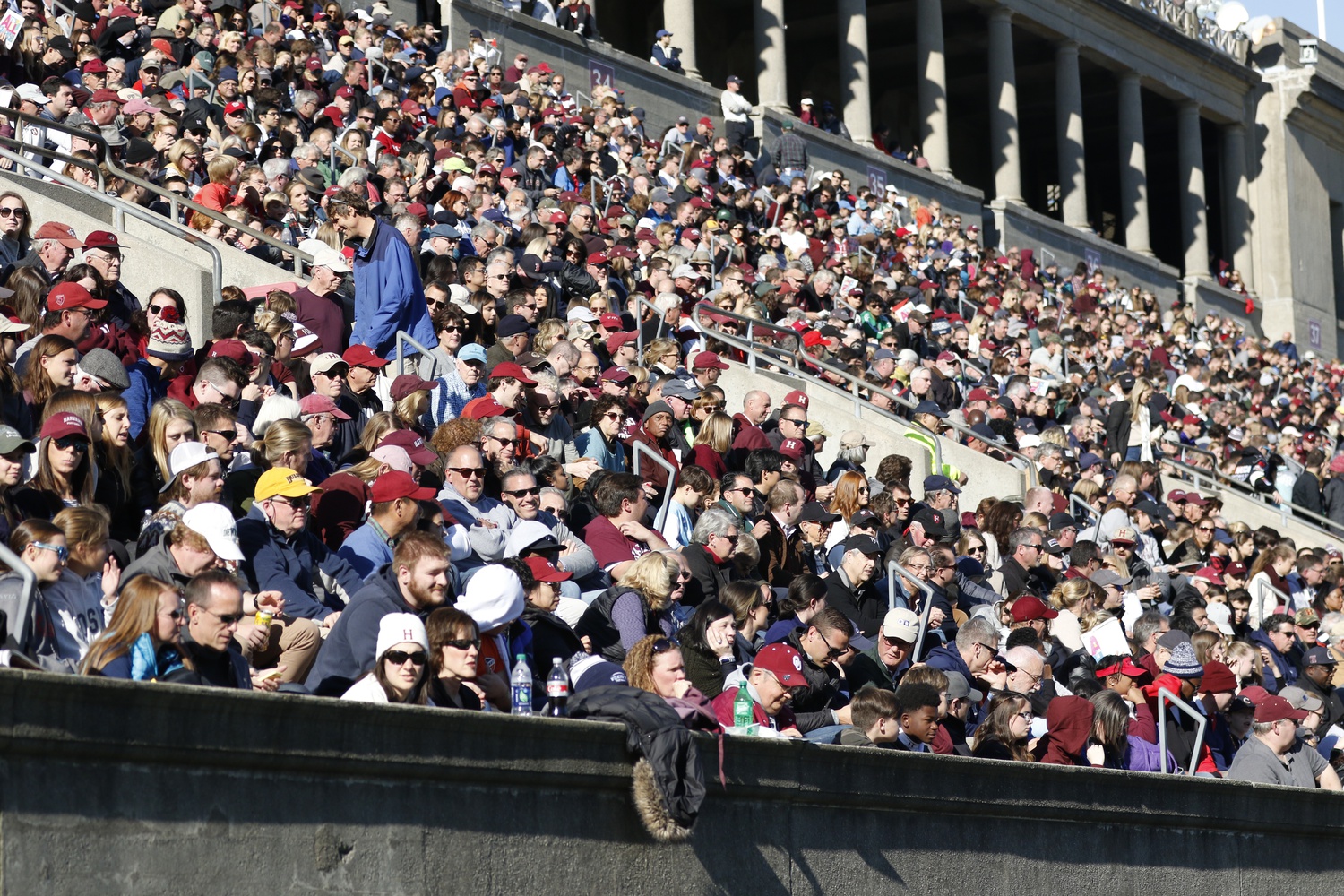 Harvard fans look on during Saturday’s football game, which took place during First-Year Family Weekend. The 9-6 Dartmouth win took place in front of the largest non-Yale-game football crowd since 2008, with 20,112 in attendance. By Timothy R. O'Meara
By Meera S. Nair, Contributing Writer

Parents, siblings, and extended family members of the Class of 2023 flocked to Cambridge on Friday and Saturday for the College’s First-Year Family Weekend.

Organized annually by the Dean of Students Office, the weekend consists of activities for freshmen and their relatives, including classroom visits, museum open houses, campus tours, and meals in Annenberg Hall — the freshman dining hall.

University President Lawrence S. Bacow and Dean of the College Rakesh Khurana opened the weekend at its official kick-off event in Sanders Theatre with welcoming remarks, noting that more than 2,000 family members had registered for this year’s slate of weekend activities.

In addition, this year’s family weekend coincided with the inaugural Harvard Athletics Fall Fest — a tailgate for the Harvard football game against Dartmouth featuring live music and yard games like cornhole. Parents proudly donning “P’23” caps and Harvard sweatshirts crowded into Harvard Stadium to watch the game after the event.

Loredana Marculescu, mother of Mihaela L. Marculescu ’23, said she flew in from Romania for the weekend. She said the Fall Fest was one of her favorite events.

“I found the Harvard Athletics Fall Fest very fun and interesting,” Loredana Marculescu said. “It was the first American football match I have ever attended, and I was instantly drawn to the energy it radiated.”

Several freshmen chose to spend the weekend off-campus exploring the Boston-Cambridge area and other neighborhoods in the region.

Helen S. Cho ’23 said the tailgate was the only Harvard-sponsored event she attended, instead opting for more off-campus activities with her family.

“We went on a long drive through the mill-towns of the Merrimack Valley and then down through Billerica to visit industrial sites and check out the scene,” Uday R. Schultz ’23 said.

Schultz said he did not feel like much has changed regarding his relationship with his parents since leaving home for the start of the semester.

“I didn’t feel like that much had changed except for the fact that I hadn’t seen them in a few months, so I was doing a lot more catching up with them than I normally was,” he said.

The College also organized a freshman faculty dinner for students whose families were unable to make it to Cambridge for the weekend.

Isabella R. Trasolini ’23, whose family did not attend the First-Year Family Weekend, said she was able to connect with others in her class through events like the dinner and spending time with friends whose families came to campus.

“My friends invited me to spend time with their families,” Trasolini said.