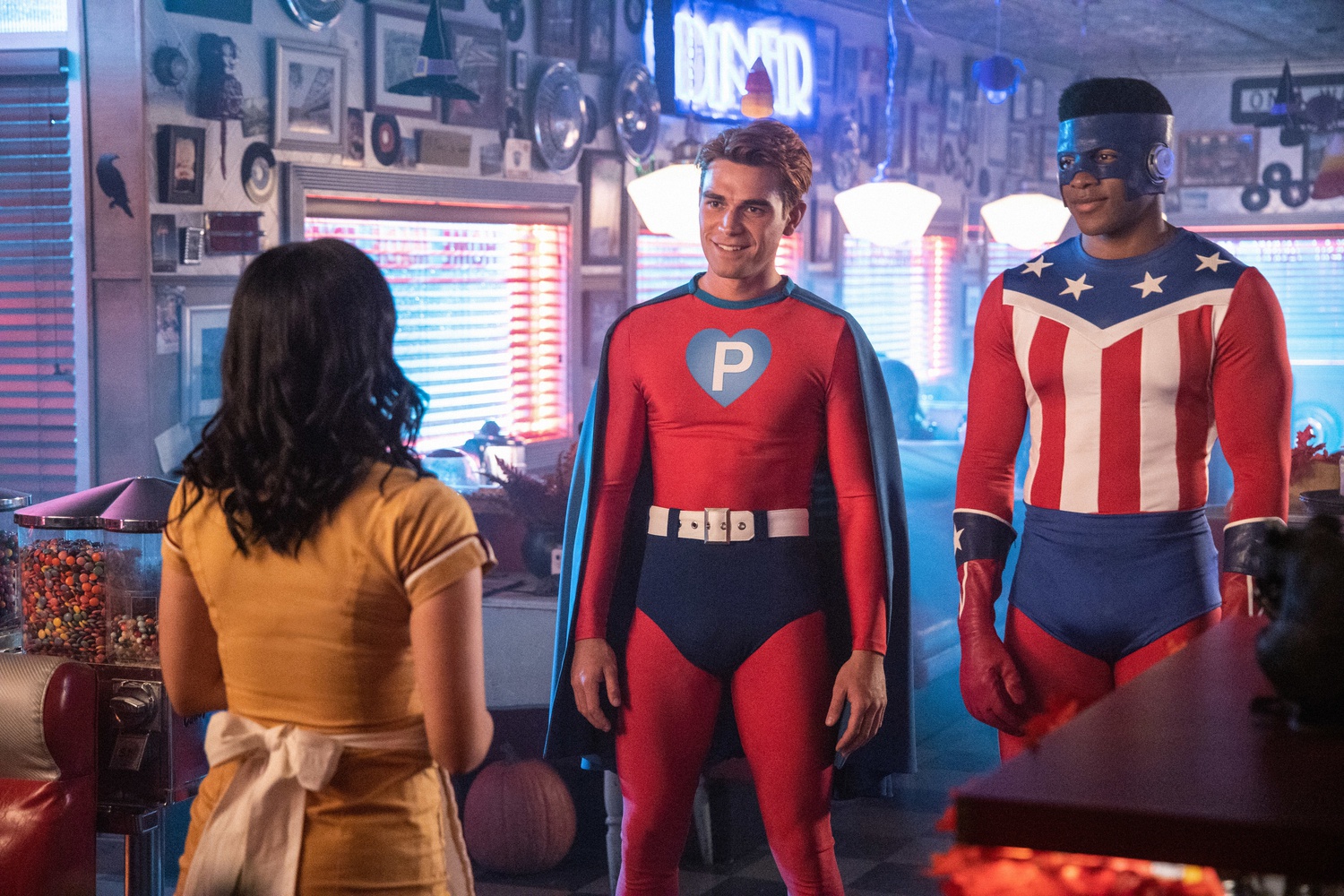 Halloween comes to Riverdale in "Chapter Sixty-One: Halloween." By Courtesy of the CW
By Caroline E. Tew, Crimson Staff Writer

Keeping up with the times, this week’s episode of “Riverdale” is aptly called “Halloween” and leans into the spookiness of the season. There are some moments throughout the episode that are truly chilling, but they’re often followed by explanations that undermine the scenes in question, whether that’s due to the strange reactions of other characters or the unsatisfying reasons for the event happening at all.

For instance, Jughead (Cole Sprouse) is locked in a coffin overnight after being drugged by a fellow student. His heavy breathing, constant shouting, and loud banging on the coffin’s lid to no avail are certainly scary. Sprouse vividly depicts the terror of waking up to find oneself in a closed — and locked — space. Less satisfying, however, is learning that this ordeal is all some sort of initiation process. His teacher finds him, but only seems mildly concerned to find a student nailed into a coffin. In his office, no less!

Veronica (Camila Mendes) has a classic Halloween night, and it’s one of the best parts of the episode. She’s closing up Pop’s alone when a trucker walks in asking for some food. He’s been on the road, he says, and wants to make it to his family before daybreak. All he needs is a home-cooked meal… so he came to a restaurant, instead of finishing his drive to his actual home? Anyway, he shows a picture of his family to V, and she smiles and offers him a piece of pie when she hears on the TV a warning about an escaped serial killer called “The Family Man,” known for forcing his victims to make him meals before killing them. Of course, it’s hard to believe spoiled Veronica actually cooked his food, but that’s neither here nor there. She runs into the speakeasy downstairs — not out the front door, to safety — and sets up a trap that is contingent on the fact that The Family Man has a lighter. And what do you know? He does! So she throws some sort of alcohol on him, sending him up in flames. It’s pretty “badass,” to quote Archie, when they’re in bed later. But really, that’s all he can muster? His girlfriend just lit a serial killer on fire, and she gets a nice pat on the back.

Archie’s (KJ Apa) story is setting out to be the dullest of the season. He’s set on making the community a better place both by beating up Dodger (Juan Riedinger) — presumably the head of a gang, but much scarier than the Pretty Poisons or the Southside Serpents — and hosting Halloween parties for kids. Veronica mentions her friend Katy Keene (an on-the-nose plug for the upcoming CW spinoff of the same name) from NYC who will somehow magically design and create costumes for Archie and Monroe (Eli Goree) for the party. Archie is Pureheart the Powerful while Monroe is stuck with being The Shield. Essentially, when FP (Skeet Ulrich) arrives too late to the community center, a kid gets shot in the leg by Dodger. Of course, Archie seems intrigued by the idea of using his new superhero costume to enact vigilante justice. Viewers can only hope this was a joke and not the next step in Archie’s life.

The teaser from last week’s episode was a mysterious tape, which turns out to be much less creepy or important than expected. It’s literally just six hours of footage of Betty’s (Lili Reinhart) house, taken from across the street. Other people in Riverdale start getting these tapes, which is sort of weird but also a disappointment amongst all the other Halloween happenings in Riverdale.

Betty comes a close second to Veronica for most traumatic night. At school, she keeps running into students dressed as the Black Hood (her father) and the Gargoyle King. Why parents are letting their children dress as the town serial killers — of the last two years, no less — is beyond me. Then she keeps getting calls from someone pretending to be the Black Hood. After Jellybean (Trinity Likins) plays a joke on Betty — in very poor taste — by pretending to be attacked upstairs, Charles (Wyatt Nash) shows up. He offers to track the calls, blames the calls on Polly (Tiera Skovbye), then offers Betty a spot in the junior FBI program, which apparently she doesn’t need to sign up for.

Perhaps most unbelievable is Cheryl’s (Madeline Petsch) plotline, which has truly just run off the rails. Toni (Vanessa Morgan) puts her foot down and makes Cheryl bury her long-dead brother’s corpse, but a creepy doll starts haunting them. “I know you’re mad that I made you bury your dead brother’s corpse, but…” is literally something that comes out of Toni’s mouth. There’s a seance and Nana Rose (Barbara Wallace) lets it slip that Cheryl was actually originally a triplet and not a twin, but Cheryl “ate her brother in the womb.” Cheryl’s mother raised the doll, named Julian, alongside her living children, and now we’re meant to believe Julian is haunting Thistlehouse. I’m begging the writers: Please just leave the Blossoms alone.

Unfortunately, “Riverdale” decides to mention domestic abuse again and handles it poorly. Reggie (Charles Melton) convinces Kevin (Casey Cott) to destroy Principal Honey’s (Kerr Smith) office. When they’re caught, Mr. Honey tells Kevin he’ll never get into NYU, which makes Kevin snitch. Then, Mr. Honey confronts Reggie and asks if his behavior is related to Reggie’s father’s abuse. Mind you, he doesn’t ask how he can help Reggie, but instead accuses Reggie of trying to mask his bruises and black eyes with jokes. Then Reggie walks outside to find his car has been completely wrecked. Who let Mr. Honey work with children?

And, in its boldest move yet, “Riverdale” gives viewers a taste of what’s to come. When Betty and Jughead are on the phone (with Charles, who is the child of Betty’s mom and Jughead’s dad, tapping the wire) Jughead tells Betty, “I think deep down I know that if I really ever went missing you would be the first one to find me.”

“I would, Jug. I promise,” she says, and then it flashes forward to a coroner’s office, where Betty and FP cry as a sheet is lifted to reveal… Jughead. Are they really going to kill off our favorite weirdo and leave us watching Archie running around in his new supersuit? I really hope not, but only time will tell.