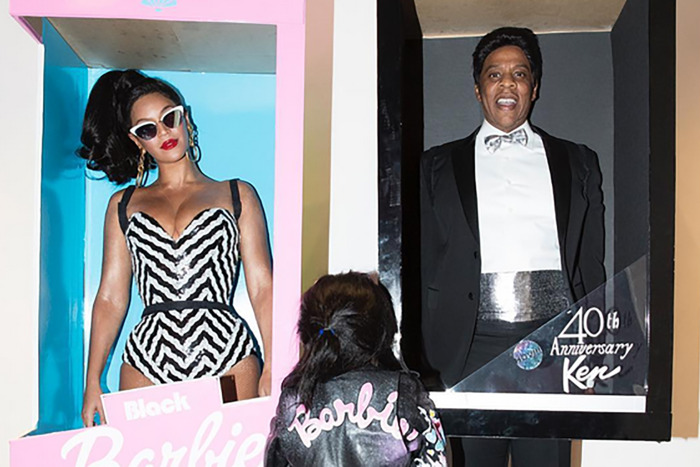 Beyoncé, Jay Z, and Blue Ivy Dressed Up As A Barbie Family By Courtesy of Beyoncé/Instagram
By Gabriella M. Lombardo, Crimson Staff Writer

When it comes to slaying spooky season, the stars undoubtedly do it best. I mean, if we had a posse of professional makeup artists and costume designers (not to mention a lavish Halloween bash to attend), we would probably go all-out, too. From the ultra sexy to the downright wacky, here are the greatest Halloween getups celebrities have pulled off in recent years.

5. Heidi Klum as an Old Lady

Under all those faux wrinkles is supermodel Heidi Klum, believe it or not. The former “Project Runway” host doubles as the commander-in-chief of Halloween, apparently: This year marks the 20th installment of her famous annual Halloween costume party. As for Klum’s 2013 Granny Heidi look, the magic is in the details. From varicose veins and some wicked prosthetics to the nanna-approved purse, this elderly moment is scary convincing. Work it, grandma.

Kylie Jenner took us back to the glory-filled early aughts with her spot-on rendition of Christina Aguilera’s Xtina-era uniform. The look is straight out of Aguilera’s iconic music video for her 2002 hit, “Dirrty” — complete with butt-less chaps and a black-streaked blonde wig. Long live the 2000s.

What kind of costume countdown would this be without Bey’s internet-breaking Barbie doll transformation? Complete with her own box, the Queen recreated the famous black-and-white swimsuit worn by the very first Barbie doll introduced in 1959. Jay-Z joined in on the fun, too, in a dapper vintage Ken costume. Life in plastic, it’s fantastic.

It’s safe to say that LeBron was going for a — to put it lightly — downright horrifying vibe with this one. Standing close to seven-feet tall, the b-baller took Stephen King’s killer clown to the next level. And we’re not here for it. Then again, we kind of are. The clown suit is exquisitely detailed, after all… vomit-inducing and detailed.

Talk about va va voom. Mistress of Halloween Heidi Klum claims not one but two spots on this list for sheer commitment. With the help of some serious prosthetics, Klum morphed into arguably the most well-known sex symbol in animation. She even documented the process of becoming Jessica Rabbit on her Instagram, showing how a team of artists helped her achieve those impossible measurements with loads of fake skin. The result? Klum became a living, breathing cartoon, and Halloween was never the same again.