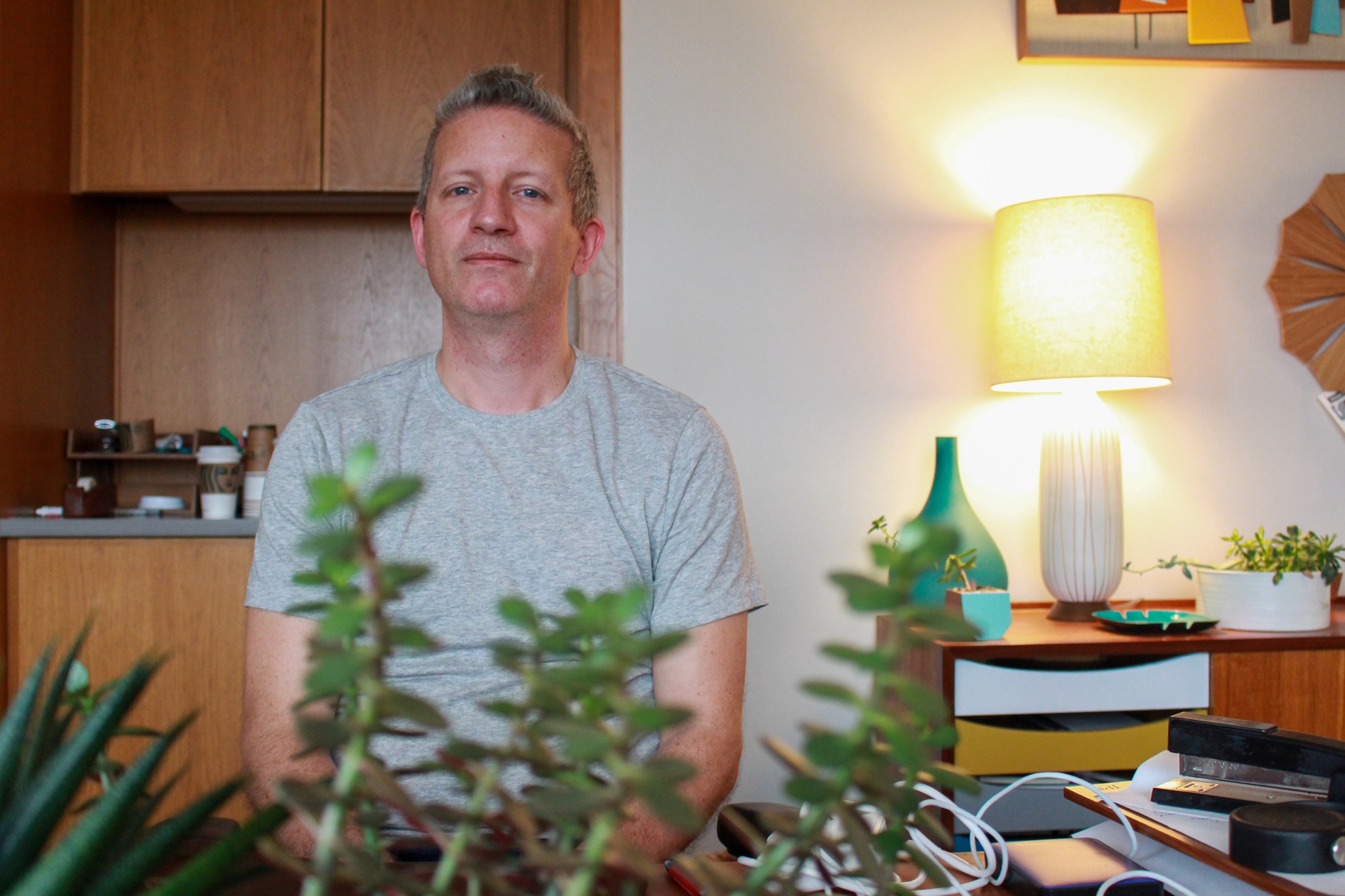 Jason Mitchell, a social psychologist in the Department of Psychology, teaches a popular General Education course titled "The Science of Happiness", in which students review historical and cross-cultural views on the meaning of “happiness” and discuss the limitations of scientific approaches to the topic. By Ryan N. Gajarawala
Advertisement
Advertisement

For Mitchell, combatting the tragic consequences of the reported spike in mental illness on college campuses was a key motivation behind his new course, GenEd 1154: “The Science of Happiness.”
By Lily J. Cunningham and Natalie L. Khan

It’s raining outside when we sit down with Psychology Professor Jason P. Mitchell, but inside his office, the colorful wall art, retro furniture, and pictures of his two young children make the space feel warm.

Through the large, rain-streaked window, we can make out a terrace of William James Hall, but Mitchell says he rarely has access to the balcony. In 2014, an alumnus of the College jumped to his death from the terrace, and it has been regularly closed off ever since.

Mitchell notes that since 2012, rates of depression and anxiety have increased nationwide by roughly 35 and 40 percent respectively. For Mitchell, combatting the tragic consequences of the reported spike in mental illness on college campuses was a key motivation behind his new course, GenEd 1154: “The Science of Happiness.”

“If you had heard that there was a 45 percent increase in sports concussions or something, we would all be having meetings about how [we can] protect our students,” Mitchell says. “One thing I thought I could do was to teach a course on what the social sciences have to say about happiness and how to live a happier life.”

The course represents a relatively recent area of psychology that focuses on positivity and wellbeing. Traditionally, classes in this realm have focused on psychopathology, the scientific study of mental disorders.

When the similar “Science of Wellbeing” was offered at Yale in 2018, it was the university’s most popular course, with a whopping enrollment of 1,200 students. Laurie P. Santos, one of Mitchell’s close friends and colleagues from graduate school, taught the course and encouraged Mitchell to bring a similar class to Harvard.

Using her materials as a “springboard,” Mitchell spent the summer as a “hermit” while he developed his own version of the course, which emphasizes specific exercises and habits that might improve students’ wellbeing. Homework for the class might include journaling or performing a random act of kindness. An occasional emailed chocolate chip cookie recipe interrupts the flood of rubrics and deadlines.

Social neuroscience — not positive psychology — is Mitchell’s area of expertise. As a result, preparing for the course required a good deal of research, something that may “sound strange,” he acknowledges. “You don’t think professors need to learn stuff. But I definitely feel as though I have.”

Mitchell has received feedback from students who say the course has impacted their perspectives on their own lives.

“The biggest personal change I’ve seen is my relationship to my work,” says Rebecca V. Buehler ’23, a student in the class. “A lot of people, including myself... feel guilty for socializing or taking care of ourselves if it stands in the way of our productivity. It turns out that happier people are actually shown to be more successful,” she says, something that has led her to reevaluate how to balance her time.

Mitchell reflects that the reaction from students has made the course particularly meaningful to him. He says that he’s been able to be vulnerable in front of his 200 students, sharing his own struggles to achieve happiness. While working toward tenure, for example, Mitchell says he became obsessed by the idea that happiness would come when he achieved that goal. “That never happened,” he says. “It always felt like there was another ring to grab, another hurdle to jump over.”

In class, he frequently refers to intrinsic motivations — the things humans do simply because they like doing them. Following this principle, since his first psychology course in high school, Mitchell’s love of psychology itself has been his primary motivation for teaching and pursuing research.

The seven years Mitchell spent working toward tenure proved fruitful, but since then, he has found himself less motivated to do research. “This was a thing I really loved,” he says. “Somewhere in this process that love of it has drained away.”

This year, he’s trying to get it back. Part of that process lies in teaching Science of Happiness. Being vulnerable in front of his students has been difficult, but also fulfilling, as it has allowed him to reflect on his own life while his students reflect on theirs.

Mitchell is going on sabbatical next year, possibly to Kyoto for the year with his wife and two kids. He hopes that spending time abroad will help put him “in a different headspace.”

“Some students take gap years,” he says, and next year will be his. “I think that’s probably a good thing, for trying to recover some intrinsic love of learning.”