So Much For The Sisterhood: Sarah Dessen and the Ugly Side of Twitter 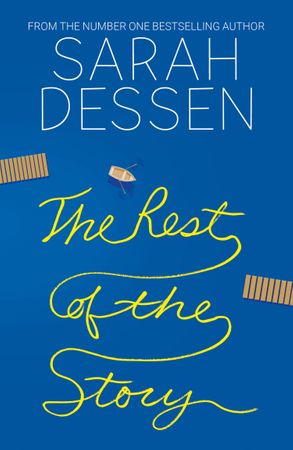 By Courtesy of HarperCollins
By Cassandra Luca, Crimson Staff Writer

On Twitter, it takes roughly half a day for a meme format to generate, another one to two days for it to spread, and an additional two days — tops — for it to peter out. When life gets in the way and checking Twitter falls down a few places on a to-do list, it’s easy to return and wonder what 30-50 feral hogs have to do with anything (an actual meme that took over people’s feeds this summer).

Thus, it’s understandable to have missed the mid-November debacle that concerned Sarah Dessen, YA literature, and people’s irrational tendencies to jump into a debate about which they do not possess all the facts. The online tiff began when Dessen, known for literature aimed at teenage girls, posted a screenshot of an article in which a Northern State University student declined to include Dessen’s books on a reading list for college students. Dessen accompanied the image with a caption criticizing the student for not deeming her work worthy of being on the reading list.

At this point, the student is the one who sounds somewhat pretentious: Surely, literature for teen girls has merit. Though people have made a sport out of mocking things that young women like — One Direction, pumpkin spice lattes, discussing their emotions — it’s still a whole genre unto itself, and is worthwhile to those who connect with its themes.

But dig a little deeper, and things get uglier: Multiple famous authors, among them Roxane Gay, Jodi Picoult, Jennifer Weiner, and Jenny Han, jumped in to defend Dessen, and soon things got heated enough that the student had to deactivate her social media presence to protect herself against harassment.

It’s fair to accuse Dessen of being tone-deaf. The student chose to include books about racial justice on the list to broaden the voices heard in literature — hardly unfair, and a detail that Dessen conveniently cropped out on the image she posted to Twitter. She made it seem as though the student didn’t support books written by and about women, when that really wasn’t the point at all. Yes, sexism is still around in 2019, but there’s already enough of it without needing to find new, nonexistent strawmen that only delegitimize the problems that persist.

There are multiple items to note amid this debacle, the first is part of being a responsible Internet citizen is attempting to get all the facts before creating an angry post. Dessen should be aware of this, and obfuscating the entire story when presumably she already knew what was true is attention-seeking at best and dishonest at worst. It’s ironic that she noted that “authors are real people” when she jumped on the serotonin-producing and virtue-signaling band-wagon that is cancelling people online. It goes without saying that the other authors who jumped in should have done their own due diligence too, but thinking before speaking seems to now be associated with the distant past. Roxane Gay did, however, publicly apologize once she realized what happened — something that rarely happens online.

The second problem here is the very act of speaking, regardless of whether one’s speech is positive or negative. Twitter, among other social media platforms, makes it extremely easy to comment, retweet, and like anything in one’s timeline, and this ease has almost destroyed our ability to think about whether our discourse is adding anything productive or meaningful to what already exists. Dessen could have taken this student’s public statement in stride — especially had she looked at the facts more carefully — but she chose to not only talk about it, but outright fabricate what truly happened. Her actions had direct consequences: the proliferation of online harassment.

That’s not to say that we should roll over in the face of unfair criticism, but perhaps silence, in some cases, would be better. Everyone in 2019 is burned out, not just because of the state of politics or the fact that many of us are overworked, but because of the constant noise and the feeling of needing to react and comment that this noise creates. The Internet was supposed to make things more democratic, but now there are too many voices shouting — with the result being that we can no longer discern what is meaningful amid the cacophony.