Cleats You Ott To See 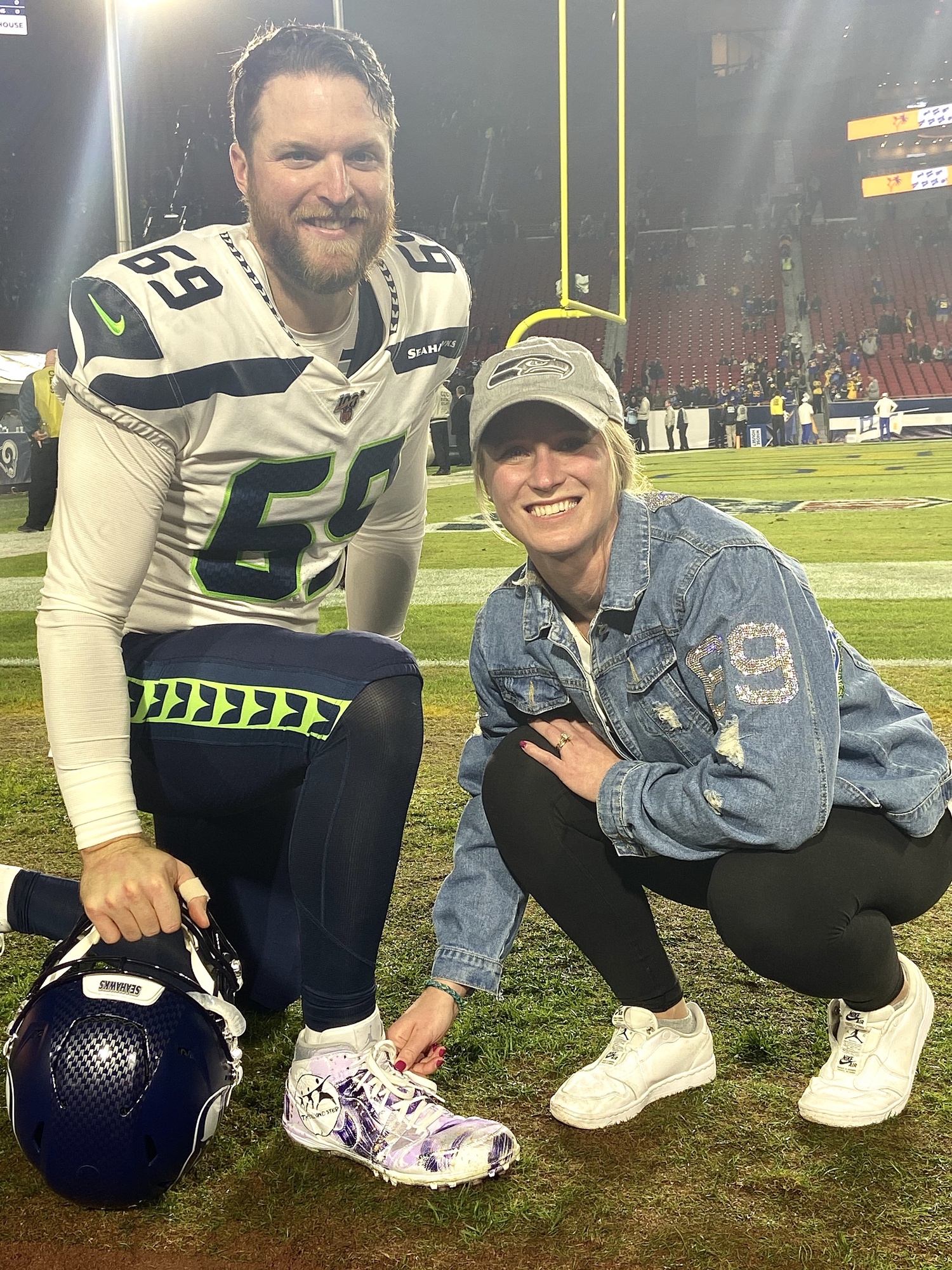 Harvard alumni Tyler and Ashley Ott support The Second Step Organization on and off the field. By Courtesy of Ashley Ott
By Zing Gee, Crimson Staff Writer

This past week, Week 14 of the NFL season, hundreds of players across professional football participated in the NFL’s My Cause My Cleats campaign. Participating players wore custom cleats to showcase different causes that are meaningful to them, and the cleats were auctioned online after the games to raise money for their chosen causes. One hundred percent of the proceeds go directly to the charities and organizations. The highest current bid for a My Cause My Cleat item? Tom Brady’s cleats, which support the TB12 Foundation and Best Buddies, are currently sitting at $20,100 at the time of publication.

If you had tuned into the Seattle Seahawks’ game against the Los Angeles Rams this past Sunday, you would have seen Tyler Ott ‘14, Seattle’s long-snapper, in white and purple custom cleats. Ott chose to represent The Second Step, an organization based in Newton, MA that is devoted to raising awareness of domestic violence and providing support, housing, and critical services to people affected by domestic violence and their families. The cleats were designed by local artist Julieanne Strom Brill.

Tyler and his wife Ashley Ott ‘11, a former women’s ice hockey player, live in Milton, MA are both Harvard graduates, with Tyler concentrating in economics and Ashley in psychology. Both lived in Dunster house. Ashley played forward for the women’s ice hockey team while Tyler played long snapper and tight end for Harvard before he graduated and moved on to the NFL.

From 2014 to 2016, Tyler had stints with the Patriots, Giants, Rams, and Bengals organizations before getting a phone call from the Seahawks on January 1, 2017 after their snapper was injured during their last regular season game. He was signed before the Seahawks’ first postseason game against the Lions that year and has stayed with the team ever since.

Before the beginning of the 2019 NFL season, the Seahawks offered Ott a three-year extension to his one-year deal for 2019, taking his contract through the 2022 season. The deal, worth about $4 million, marks the first time Ott has received a contract longer than a single year, giving him and Ashley some well-earned and welcomed stability. This has allowed Ashley, a partner at Vantage Point Financial, to open up a Seattle branch office for her company, giving her the flexibility to work on each coast.

The couple originally got involved in The Second Step after attending a book launch for No More Secrets by A Sisterhood of Survivors, the story of six women’s participation in a healing group with The Second Step. Ashley was inspired and joined several committees to learn more about The Second Step, and was then asked to become a board member.

“I’ve been a board member for over a year now and have enjoyed helping The Second Step evolve,” said Ashley. “The work and the passion of those that work for The Second Step should be emulated by other organizations, and I believe [it’s] something that can be a model for other domestic violence no-profits.”

“Like Ashley said, it’s a powerful organization and I think they approach the subject different than most,” Tyler shared. “When these women share their survival stories they show others the ‘greener side of the grass’ and that they too can get out of abusive relationships. They also show the world that anyone, from all backgrounds and upbringings, can be in abusive relationships.”

Ashley reflected on her experience listening to a keynote speaker at The Second Step’s Celebrating Success Gala last year, who shared her story of domestic abuse and recovery.

“She looked like me, had a similar upbringing in a suburb of MA, and ended up in a relationship where she was abused physically and verbally. It just reminded me again, that it could happen to anyone, and it does. Domestic violence is unfortunately extremely prevalent and many victims need the help and support that The Second Step provides. This is why it’s so important to spread the message of the great work they do.”

The couple’s involvement with The Second Step and support for its message and programs is why they chose to use their platform to bring more awareness to the organization and to the growing issue of domestic violence. The NFL’s My Cause My Cleats campaign provided the perfect opportunity to do so, giving Tyler the chance to wear his custom cleats to support the cause.

“The NFL has made headlines in the wrong ways regarding domestic violence in the past few years. It’s a big stage with a lot of viewers and influence,” Tyler said. “Hopefully dedicating my cleats to The Second Step sheds some light on the issue of domestic violence, the resources available for victims, and how we all can help.”

The game against the Rams was broadcast on primetime national television during Sunday Night Football, and despite the Seahawks’ loss, the exposure for a good cause was a win.