‘Fine Line’ and the Church of Harry Styles 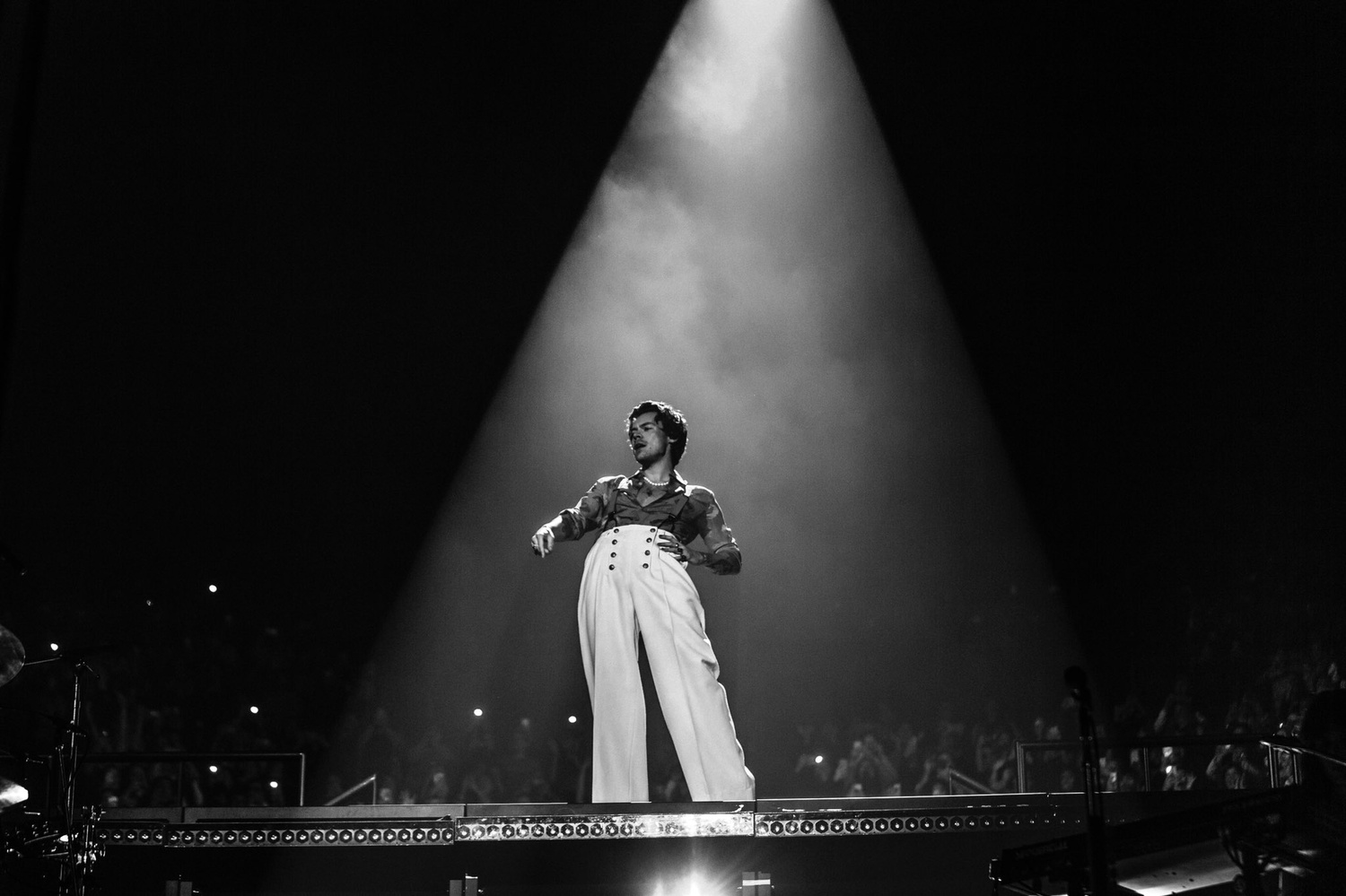 Harry Styles at the Forum, courtesy of his Twitter @Harry_Styles By Courtesy of Harry Styles
By Caroline A. Tsai, Crimson Staff Writer

There’s something godlike about Harry Styles. Teenage girls have known since the dawn of One Direction around a decade ago, back when Styles was just the curly-haired, charismatic one out of a fresh-faced ensemble of five. Even before his natural showmanship evolved into fully-fledged stardom, he was engulfed early on by cult-like adoration: Blogs dedicated themselves to the forensic analysis of his tattoos, Instagram captions, and sartorial choices. Update accounts kept the public abreast of his general (and sometimes specific) whereabouts, matching carpet patterns and wallpaper to specific restaurants and hotel lobbies.

Of course, other pop stars have incited similar levels of fandemonium — recall the frenzy of Beatlemania — but the ascendance of social media has enabled devotion verging on the obsessive. It has also allowed Styles to seem simultaneously more available and more distant: Despite the seeming immediacy of Twitter and Instagram, Styles’ disuse of the platforms for purposes other than self-promotion has given him the glamorous mysteriousness of a much older kind of star. Fans are left to concoct imagined versions of his inner life, a practice that gives the illusion of intimacy in place of a much realer distance.

The result is a fandom that feels at its best like a close-knit community and at its worst dangerously close to hero worship. Styles’ alleged romantic partners are scrutinized and harassed online, their Instagram comments flooded with jealousy and vitriol. Anyone levying even reasonable criticism against the singer is met with instant backlash. When someone becomes an idol, it seems, he can do no wrong. For what it’s worth, Styles himself has embraced a much more literal aesthetic of deification. His first album featured baptismal imagery, the body submerged in the waters of spiritual rebirth. As long as the zeitgeist has demanded a pop idol, Harry Styles has delivered.

But to be worshipped is not a wholly positive status to occupy. Idolization, while flattering, inevitably revokes some fundamental essence of personhood. There’s a certain freedom in vulnerability and the ability to make mistakes — a freedom certainly not afforded to Styles, nor any of his bandmates, in their first ventures into solo artist-hood. “When I hear the first album now, I can hear all the places where I feel like I was playing it safe because I just didn’t want to get it wrong,” Styles said in a recent interview with Zane Lowe.

Regardless, his efforts paid off. Among bandmates’ solo endeavors, which have ranged from the passably mediocre to the offensively bad, Styles has largely come out on top, thanks to a slate of dependable collaborators, a savvy PR team, and most critically, a distinctive musical vision sampling the annals of ‘70s dad rock. A resistance to producing radio-ready hits and a willingness to work against the grain culminated in the 2017 eponymous debut album that featured singular stand-out tracks like the sweeping, Bowie-inflected lead single, “Sign of the Times,” as well as the sweet “Blackbird” tribute, “Sweet Creature.”

In “Fine Line,” the rich follow-up to a laudable debut, Styles is not quite done with homages. Traces of his Laurel Canyon idols still remain, from the sprightly dulcimer in “Canyon Moon” lifted (quite literally) straight from Joni Mitchell’s “Blue” to “Golden,” the adrenaline-heavy album opener whose layered harmonies take cues from Crosby, Stills & Nash’s “Suite: Judy Blue Eyes.” Yet compared to its predecessor, “Fine Line” finds Styles less fixated on hewing too closely to his rock roots. Instead, in the sophomore release, he inaugurates a freer, more self-assured musical era — bold and hedonistic, lush and sensual, at turns psychedelic and subdued. The resulting album works sensitively through a host of personal exploits, from the trials of stardom to the painful aftermath of a break-up, all the while experimenting with more eclectic, genre-bending soundscapes.

Heartbreak is particularly compelling material in “Fine Line,” which grieves the end of a serious affair that leaves Styles “selfish and… hating it.” There are meta moments (“I’m well aware I write too many songs about you”) as well as diaristic ones (“I just miss your accent and your friends”), the latter of which accumulate in “Cherry.” The folksy lament for lost love is punctuated by electric sitar and a ghostly voicemail from a certain French model, which haunts the last 10 seconds of the song perhaps more uncannily than Styles intended.

For a singer whose self-professed modes are “having sex and feeling sad,” the album certainly favors the latter, yet eros gets a few mentions — “Watermelon Sugar,” namely, winkingly gestures at what Zane Lowe succinctly termed “the joys of mutually appreciated oral pleasure.” (Ahem!) Sex makes other, more casual appearances — the whimsical, Vampire Weekend-influenced “Sunflower, Vol. 6,” in which Styles asks to “let me inside / I wanna get to know you” or the title track, which proclaims that “spreading you open / is the only way of knowing you.” Yet Styles tends to wear the imagery too lightly, the libidinous swagger on which the edifice of rockist grandeur is built. Maybe sexual liberation is a necessary reclamation for an artist who has been marketed since his early teens to be both romantically available yet also somewhat sexless, whose public sexual expression could never extend beyond boyish flirtation.

But even so, sex is not the richest material in the album’s lyrical arsenal. Perhaps the most revealing love affair on the album — the one most worthy of Styles’s attention, and ours — is the one he has with himself. Vulnerability, maturity, and self-actualization collide in the sly, self-deprecatory “To Be So Lonely,” a lament for an “arrogant son-of-a-bitch who can’t admit when he’s sorry.” Meanwhile “Falling,” a piano ballad that marks one of the more conventional tracks on the album, demands if the singer has become “someone I don’t want around.” And finally, poignantly, in the album’s title track and closer, a slow-burning Bon Iver pastiche paces itself before building to a swelling, trumpeted celebration, heralding life on the edge of growing, learning, and becoming. “We’ll be a fine line,” Styles promises again and again, delivering a spiritual mantra. “We’ll be alright.”

And maybe we will, because Harry Styles says so. Has there ever been a more persuasive showman? What ought to sound like truisms are imbued, in Styles’ voice, with the freshness of new realization (with the exception of “Treat People with Kindness,” the only song with an explicitly articulated mantra, which overextends Styles’ otherwise anodyne aphorism into preachy didacticism). But elsewhere, everything is heady and potent. Love is suddenly love again; heartbreak is sharp and lacerating; longing is boundless and all-consuming. It’s as if Styles’ famed shrooms have leached secondhand psychedelia into the veins of the album, so radical is its emotion, so intense is its feeling. 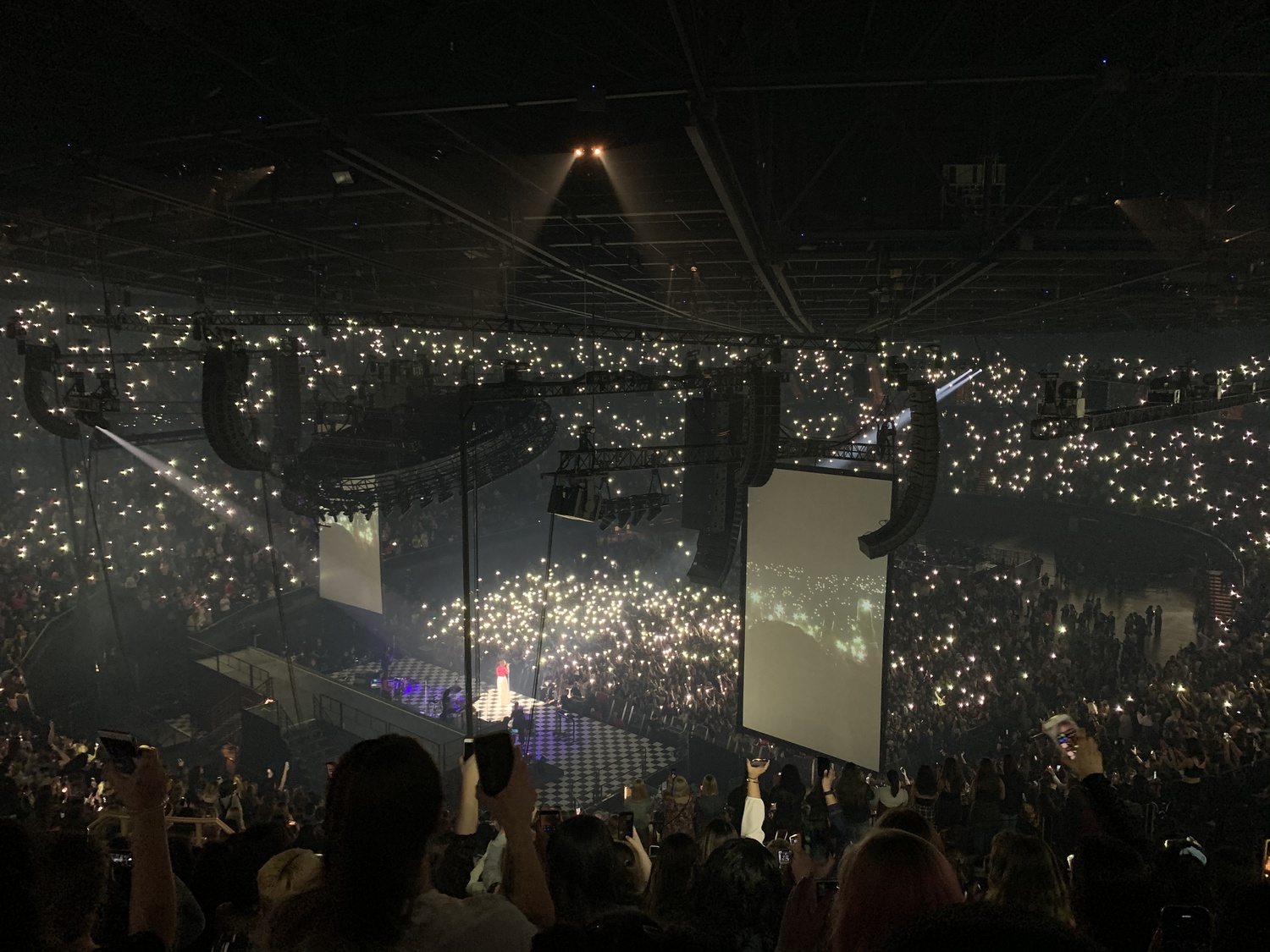 Harry Styles at the Forum By Caroline A. Tsai

When it comes to radical love, it seems Styles is preaching to the choir. Though “Fine Line” and its self-titled predecessor have been met with generally favorable critical reception, neither album is likely attracting much new listenership. The singer’s main demographic remains former One Direction fans who have aged into college, now old enough to drive themselves to concerts and legally drink, but still in the throes of adolescent heartache. At 25, Styles is as much a millennial crush as he is a pop icon; listening to the album is less an exercise of musicianship than it is an act of intimacy.

Watching the (overwhelmingly adolescent, female-presenting) crowd flood into the general admission section of the Forum in Inglewood, Calif. for the album’s one-night-only release show on Dec. 13 — for which resale tickets ranged upward of $300 — you got the sense that these were not casual admirers, but loyal followers who’d accepted Styles as lord and savior. Pop stars, more so than ever, create their own cinematic universes, in which fans inhabit a communal, insular space and share a lexicon of inside jokes. Is it better to hold citizenship there or merely vacation, if both proximity and distance invariably color the experience of listening? Does liking an artist corrode a critic’s ability to critique them objectively?

Despite having objectively the worst literal vantage point in the Forum that night (Section 221: directly behind the stage, the perfect position to take grainy videos of Harry’s back for two straight hours), I found myself in the curious position of straddling two conflicting figurative vantage points: that of the critic and the fan. Attending a One Direction concert, which I did three times between 2013 and 2015, felt conspicuously like entering teenage girl utopia, the soft grunge world of fanfiction, GIFs, and memeable angst. Because the Internet is a solitary activity, I always found it somewhat surreal to see these legions of real, corporeal people, modeling the Urban Outfitters catalogue and reciting every incantatory lyric with the seriousness of scripture. In the real world, nobody took One Direction (and by extension, the desires and interests of young women) seriously. Here, everyone did.

Being at the Forum that night felt like a reactivation of that high-energy earnestness that comes from the ardent admiration of teenagers. Though One Direction went on hiatus four years ago and I’m old enough now to understand its commercial qualities, I still have yet to experience a joy as effortless or uncynical as being at the concert of a beloved artist. It’s frivolous joy, maybe, but it feels real. The art you love as a teenager tends to latch onto you forever, no matter how effortfully you try to detach yourself from it.

It’s easy, after all, to maintain a critic’s cool distance. It’s much harder to like anything with the unabashed fervor of fandom. It requires a sacrifice of ego, a kind of courageous vulnerability, to love anything so fervently. Admittedly, there are questionable parts of Styles’ persona — the rotating cast of willowy Victoria’s Secret Angels who are off-puttingly regular fixtures of his company, for instance, or the borrowing of queer aesthetics that some detractors have perhaps fairly criticized as opportunistic queerbaiting, especially since Styles has declined to comment publicly on his own identity. But with Styles’ credo of kindness, equality, and visibility, there are surely worse altars at which to worship. At this concert, as with many others, Styles announced, “Please feel free to be whoever you want to be in this room.” Though it’s a frequent staple of a Styles show, it clearly hadn’t worn thin then. Proust once wrote that popular music “may rank very low in the history of art, but it is immensely important in the sentimental history of civilisation.” How easy it was, in that arena, to feel buoyed by a sense of infinite love, to be swept into a mass of limitless wanting.

After the concert, as Styles finished a floor-shaking rendition of his last album’s anthemic single “Kiwi,” the lights slowly returned and crowds began to file toward the door. A girl next to me gushed to her friend, “That was a spiritual experience.” The show was over. It was time to go. I couldn’t help but feel a sense of loss. I looked down and realized that my hands were clasped, as if in prayer.