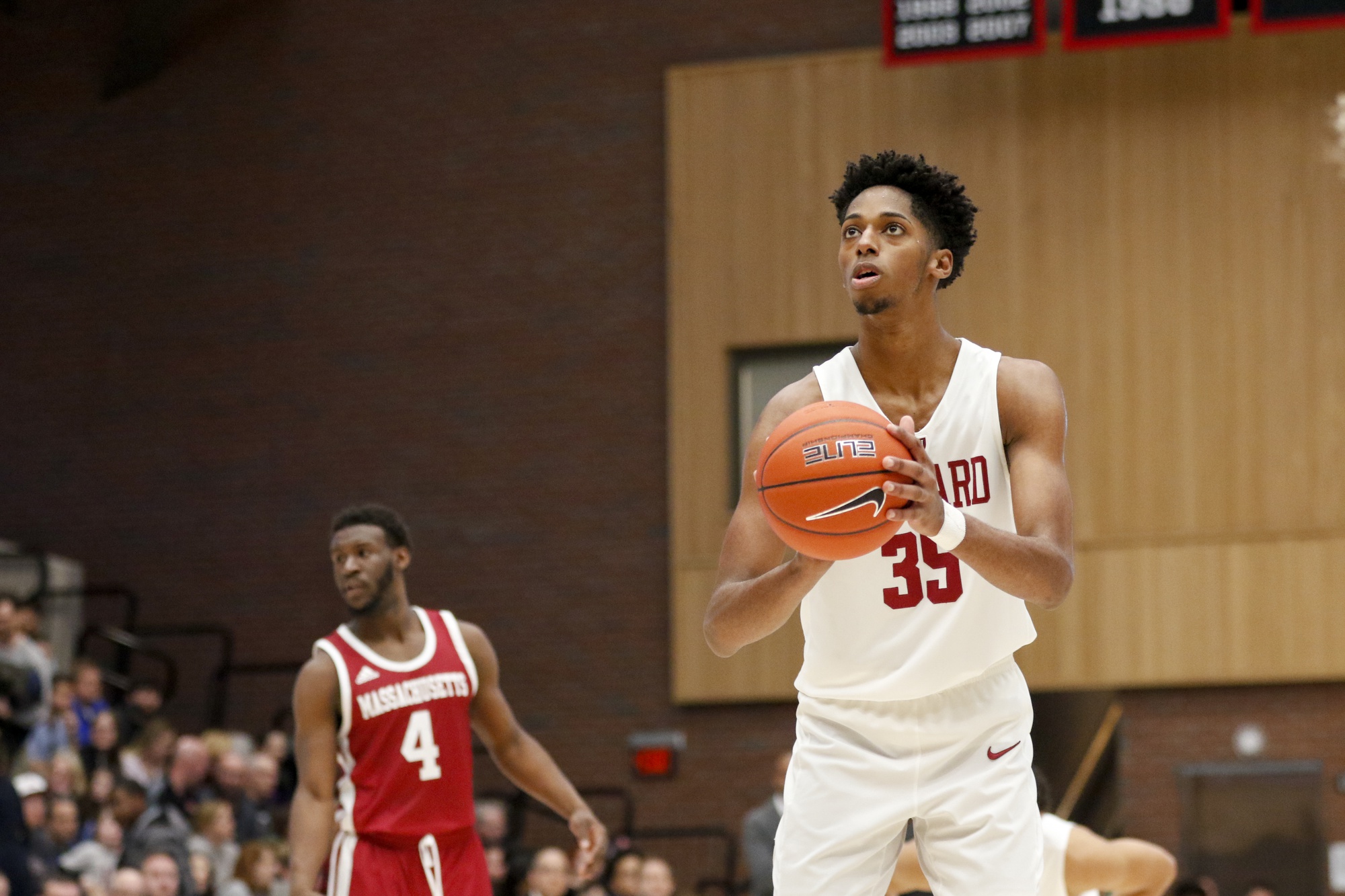 Senior forward Robert Baker readies himself for a free throw. He made all three of his shots from the charity stripe en route to a career-high 19 points. By Timothy R. O'Meara
By Lev Cohen, Crimson Staff Writer

Harvard men’s basketball closed an up-and-down first month of its season in style, cruising past Massachusetts 89-55 at Lavietes Pavilion on Saturday in its last game for two weeks. It snapped a two-game losing streak and was the Crimson’s largest-ever victory against the Minutemen, who still hold a 16-11 series lead against Harvard.

After dropping its final two games of the Orlando Invitational last weekend, the Crimson (6-4) needed a win to avoid heading into the short break at .500 and on a three-game losing streak. Harvard got that crucial win resoundingly, slowly building a big lead in the first half and then dominating the second half of a game it never trailed to send Massachusetts (5-5) to its fifth consecutive loss.

Sophomore Noah Kirkwood and senior Robert Baker led the way for the Crimson with an efficient 19 points apiece. They played just 25 and 20 minutes respectively and shot a combined 14-of-19 from the field, 5-of-9 from three, and 5-of-5 from the line. The 19 points were a career-high for Baker, who has shown flashes of brilliance throughout the season, and a season-high for Kirkwood.

The sterling performance was nothing new for Kirkwood, a 6’7” Ontario native who became one of Harvard’s better players down the stretch last season. He has not lost a beat this year, averaging an efficient 11.2 points per game on 48% shooting from the field and a superb 41% mark from beyond the arc. He has also visibly improved as a playmaker, boosting his assists from 1.9 to 3.4 per contest and cutting his turnovers by nearly a full turnover per game to 2.0.

“[Kirkwood] is arguably our best player, him or [senior point guard] Bryce [Aiken],” junior guard Rio Haskett said. “He just brings a good poise. He’s only a sophomore, but he plays ahead of his time. He’s so mature, and he’s just getting better every year.”

Aiken, generally the Crimson’s leading scorer and one of the highest-usage players in college basketball, took a backseat scoring-wise in this game, taking just two total shots in 19 minutes and playing just three minutes in the second half before being removed with four fouls. But Aiken made his presence known in other ways. He visibly settled down an offense that at times struggled without him, and Harvard was +27 in the 19 minutes he played.

“[Aiken’s] quarterback play — a lot of times he’s in the middle of scoring a lot of points for us but today it was necessary to be a quarterback and find the open people,” head coach Tommy Amaker said. “The start we were able to have was because of his effort and his intelligence and how he played and passed and made everyone around him better.”

Aiken also helped key a defense that was locked-in from the start. With less than four minutes to go in the first half and the Crimson leading 37-20, he responded to a steal by Massachusetts’ freshman point guard Sean East II by hustling back and taking a charge from East on the ensuing fastbreak. The drawn charge was emblematic of Harvard’s defensive effort throughout and happened right in front of the Crimson’s bench, yielding the bench’s biggest celebration of the day.

It was one of Harvard’s most well-rounded performances of the season on both ends of the court. The Minutemen came into Saturday shooting a superb 37% from beyond the arc but struggled to the tune of a 3-of-19 performance, with one of their makes coming on a Carl Pierre make on their very first possession. Pierre, a junior guard out of Boston, finished with 10 points on just 2-of-10 shooting, joining freshman center Tre Mitchell (13 points) and sophomore forward Sy Chatman (10) in double-figures.

“I definitely think our emphasis today was our defense,” junior forward Danilo Djuricic said. “Defense is what started up our offense so when we’re playing defense like that everyone’s involved. You saw the bench today — a lot of energy.”

The Crimson was aggressive offensively throughout the game, taking it to the hoop and collecting offensive rebounds against a team that was allowing a 32.2% offensive rebounding rate coming into the game, putting them in the bottom quintile of the country. That mark did not improve Saturday, as Harvard secured 12 offensive rebounds on 23 missed shots and converted them into 17 second-chance points. The Crimson finished with 46 points in the paint, 24 points from three point range, and 17 made free throws as just two of its points came from midrange, basketball’s least efficient area.

“We really felt that they are a team that has pressed a lot and played with a lot of pressure, and in order for you to be successful against that — one, you’ve got to handle the ball, but you need to attack pressure with intelligence and so I thought we did that very well throughout the game,” Amaker said.

Senior forward Chris Lewis, like Aiken, was saddled with foul trouble and was limited to 11 minutes, but his nine points were enough to take him over the 1,000 point plateau for his career, making him the 35th Harvard player to reach the milestone.

The Crimson will look to build on this performance in two weeks when it travels to Washington to face George Washington and then Howard before it heads to California in late December.