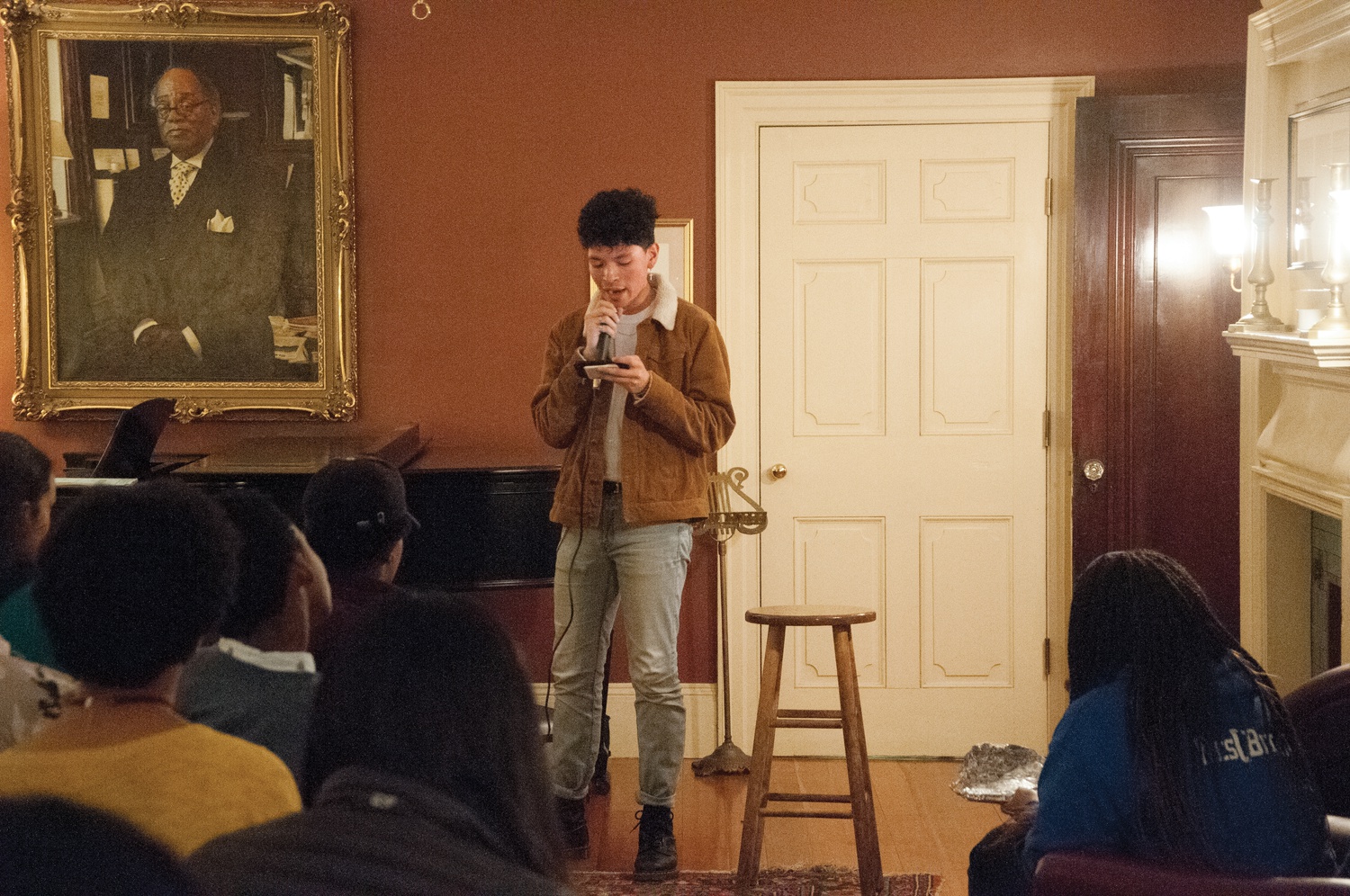 Jesus A. Estrada '22 reads a poem in English and Spanish that narrates a mother-son relationship through gardening work and immigration at the Signet Society Thursday evening. Act On A Dream and other affinity organizations co-hosted an open mic to reflect on immigrant experiences, especially black immigrant experiences, after the arrest of artist 21 Savage. By Camille G. Caldera
By Elizabeth X. Guo and Amanda Y. Su, Crimson Staff Writers

Dozens of students gathered on wooden chairs and sofas for an open mic night focused on issues of immigration and blackness at the Signet Society Thursday evening.

The event’s sponsors — Act on a Dream, a student immigration advocacy group; the Black Students Association; Harvard African Students Association; the Harvard Caribbean Club, the Signet Society; KeyChange, an a capella group that performs songs by black artists; and the Institute of Politics — sought to create a space for intersectional dialogue about migration, blackness, and policing.

“I hope people come to this event and learn that immigration is more than just a Latinx issue, it’s an issue that transcends races,” Diego Navarrete ’21, co-director of Act on a Dream and a Crimson Editorial board member, said in an interview before the event. “It crosses a lot of different communities.”

HCC Vice President Char Deslandes ’21, who is an international student from the United Kingdom, discussed the importance of the event in recognizing the “incredibly terrifying” experience of being a black immigrant in the United States.

“You’re constantly on edge especially as a black person, if I’m being real. I never know will a police officer stop me, will I have a terrible interaction that escalates and causes me to not be able to stay at school?” Delandes said.

“We care about black immigrant narratives,” Afify said when introducing the event with Garcia. “They matter, and they’re something that must be discussed.”

More than a dozen students performed at the open mic evening. Acts included songs, original poems, and recitations from a Facebook post and Nelson Mandela’s autobiography, “Long Walk to Freedom.”

Lauren A. Tucker ’22 performed an original spoken word poem entitled “Black History, My History,” which she called a product of personal “frustration and reflection.” Tucker said she attended the event because of her desire to remind audience members of black history.

“Black history cannot just be confined in pages 248 to 256 in your American history textbook. Today is black history,” she recited in her poem. “We are black history.”

Tucker said in an interview after her performance that she appreciated the welcoming space that “Issa Open Mic Night” provided for personal creative expression.

“It’s a beautiful audience, a diverse audience,” Tucker said. “It was really nice, just with the vibe and people who are sharing vulnerable pieces.”

In between student performances, students enjoyed drinks and food while mingling with each other. During intermissions, students who wanted to perform next notified Garcia and Afify, who then introduced them to the room.

Ilham A. T. Ali ’21 also performed at the event, sharing both a poem on behalf of an anonymous student and her own original poem that was inspired by her mother, who is a Sudanese activist.

Ali’s poem, named for her mother, shared stories about her participation in protests erupting across Sudan in opposition of the country’s authoritarian government and violent raids by the government and secret police on civilian homes.

At the end of the event, Garcia and Afify thanked audience members, performers, and co-organizers.

“Our main focus is to create a forum for everybody, creating an intersectional community that will welcome people to the community who may not have felt as welcomed before,” Garcia said.

“We’re very proud to have had this event in this place,” Abraham E. Rebollo ’20, a Signet member, said. “We are trying to open the space up more to artists of color and activists groups to use this space and to be able to have a platform to speak about their experiences.”