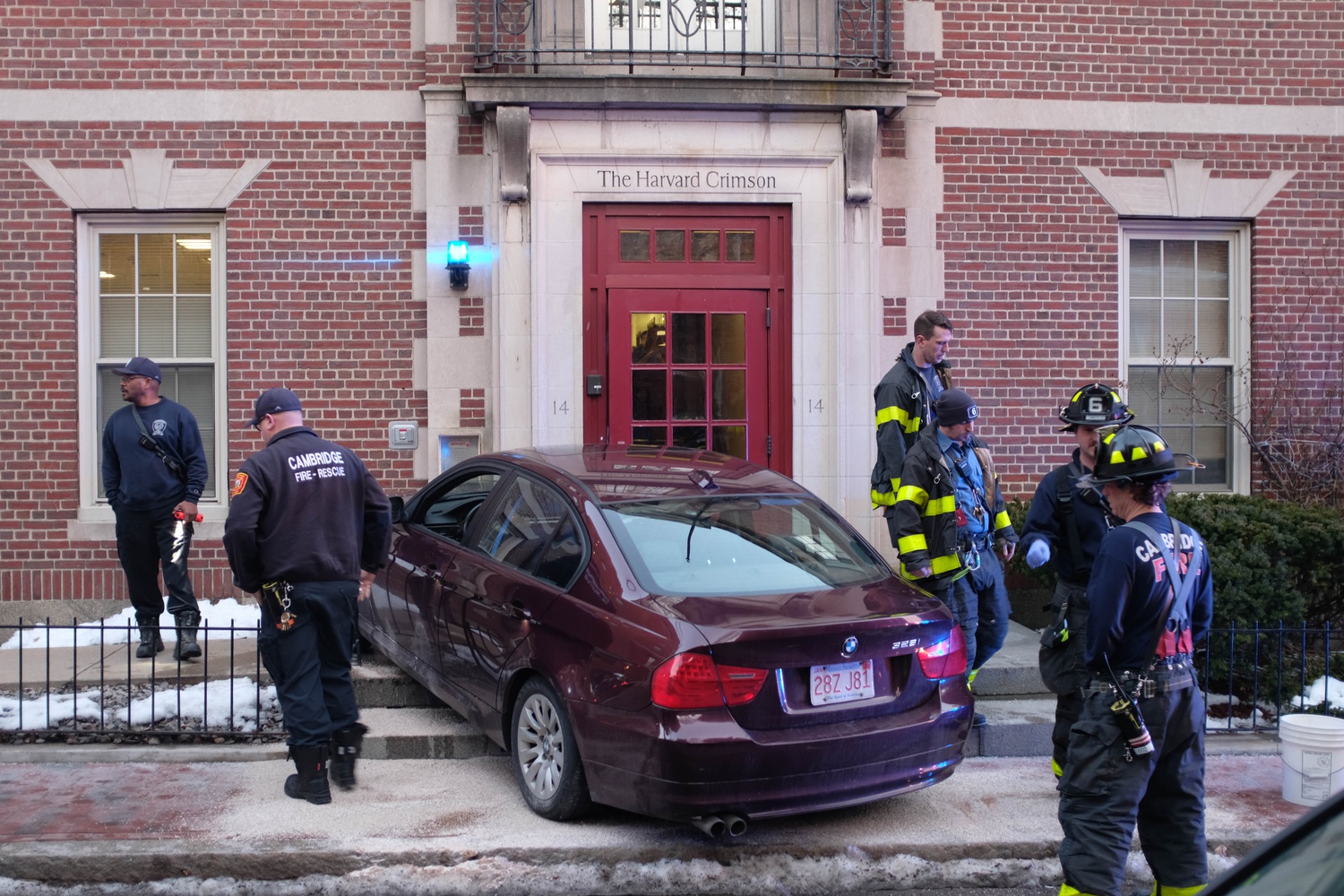 A car crashed into the front door of The Crimson Monday evening, damaging the exterior of the building. The driver sustained minor injuries. By Kai R. McNamee
By Michelle G. Kurilla and Tamar Sarig, Crimson Staff Writers

A maroon BMW struck the front of The Harvard Crimson building at 14 Plympton St. on Monday evening, damaging the entrance. The driver sustained minor injuries, and no one else was injured.

The car was driven by Jonah Naghi, who said he was in Cambridge to host an event at Harvard Hillel. Naghi did not recall the name of the event when asked after the fact. He said he was driving his mother’s vehicle at the time of the crash, which he had borrowed to get to work.

Naghi said he was originally parallel parked on the other side of Plympton Street, but after seeing that he was on the edge of the white line, he “wanted to get a little closer in.” While turning his car to adjust, he said he accidentally drove the vehicle into the front door of The Crimson.

“I mean, it all happened so fast, but I believe after I felt I was going a little too fast, I switched my foot to the brake, but then it just kept going,” Naghi said. “The brake wasn’t working, and then I bumped into the door.”

Sihak Lee ’20-’21, who witnessed the accident, said he had been helping Naghi guide his car into the parking spot and that Naghi was correcting his position when the crash occurred.

“I was standing next to him, and I told him that he needed to pull his car out to the car in front of him, so that his wheels are parallel,” Lee said. “And when he was trying to do that, he approached the front car really quickly, halted for a second, and then resumed to swerve into the building.”

“It was kind of like a movie scene just happening in front of my eyes,” Lee added. “I did try to coach him, but that part I didn't tell him to do.”

Naghi said he did not intentionally drive the car into the building.

“I wasn’t under the influence,” he said. “It was just an accident.”

“I don’t drive that often, as you can probably tell,” Naghi added.

Harvard Crimson President Kristine E. Guillaume ’20 was at the building at the time of the incident and spoke with the driver and police officers on the scene.

“I am grateful that everyone is safe and no Crimson editors or passersby were harmed in the incident this evening,” Guillaume wrote in an emailed statement. “We are handling the situation accordingly.”