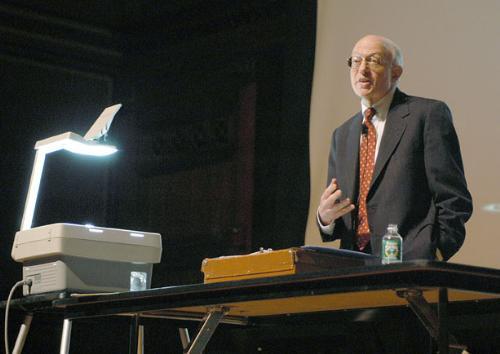 Feldstein was a prolific academic who served in a number of political roles. During his career, he served as the chief economic advisor to Ronald Reagan and the president of the National Bureau of Economic Research. He also penned scores of op-eds and papers, some of which predicted changes to come in both national and international economies.

Harvard Kennedy School professor Jason Furman ’92 — a former student of Feldstein’s — said that his mentor predicted how the Euro would sow strife within Europe and was also quick to spot the 2008 national recession.

A New York native, Feldstein attended the College and went on to Oxford for a graduate degree. He returned to teach at Harvard in 1967.

Jeffrey B. Liebman, a professor of public policy at the Kennedy School, said that Feldstein — his dissertation advisor — was “legendary” as a teacher.

“He gave us unlimited amounts of his time, whatever resources we need for our research,” Liebman said. “He never took a sabbatical because he never wanted to miss an opportunity to teach.”

Economics professor and incoming Lowell House faculty dean David I. Laibson ’88 said in a written statement that Feldstein was “a terrific mentor and a champion of young scholars.”

Many of Feldstein’s former students went on to reach the upper tiers of the economics profession. They include former University president Lawrence H. Summers, whom Feldstein hired as an undergraduate research assistant in 1973, and Economics professor Raj Chetty ’00.

“I sent Marty an email to work as his research assistant when I was a freshman at Harvard in 1997. He replied and basically set me on my career path today,” Chetty said in a written statement. “[He’s] someone who could go from talking with the President of the U.S. to a first-year at the college and educate them both while making them feel valued.”

Feldstein’s mentorship did not expire after graduation. He told his students that they were “students for life,” according to Liebman.

“I remember when I was working in the Clinton administration on social security reform, I looked around the room, and there were five economists working on the security plan. And four of us had been trained by Marty,” Liebman said.

The fifth person in the room was an intellectual “grandchild” of Feldstein’s, having been trained by one of his students.

Feldstein’s passion for policy was one that he transmitted to those he taught, according to economics professor N. Gregory Mankiw, who succeeded Feldstein as head of the course Economics 10a: “Principles of Economics.”

He wanted every student “to actually understand the world; to be able to read the newspaper as an intelligent citizen,” Mankiw said.

Feldstein himself advised Reagan and Obama alike, the latter as a member of the Economic Recovery Advisory Board.

Furman — who formerly served as chairman of Obama’s Council of Economic Advisers — said that Feldstein gave generous advice to politicians on both sides of the aisle.

“Marty was one of the people who set the tone for inclusiveness and openness to dialogue,” Mankiw said.

Feldstein also championed practical and policy-oriented research at the National Bureau of Economic Research during his three-decade tenure as president of the non-profit.

“Among Marty’s gifts to the economics profession was the creation of the ‘new’ NBER, a remarkable innovation that has been emulated elsewhere,” Economics professor Claudia Goldin said in a written statement.

Mankiw added that Feldstein was a “bridge-builder” not just intellectually, but also socially, often hosting dinners for students and colleagues at his Belmont home.